As the father of two sons, I am trying to protect my children from the undercurrent of violence that is rippling through American schools in the forms of bullying, viral humiliations, and the occasional extremes of shootings and suicides.

Searching for an answer, I read widely and sought out public figures who have dedicated their lives to exploring and advocating for the alleviation of suffering—Dr. Rick Hanson, Dr. Dacher Keltner, Dr. Dan Siegel, Thich Nhat Hanh, Father Richard Rohr, and others.

From this research, I concluded that cultivating compassion really is the best way to protect our boys from violence—or, as Hanh says, “Compassion protects you more than guns, bombs, and money.” From their combined scientific and spiritual perspectives, a four-fold process for cultivating this resource in boys emerged.

When UC Berkeley professor and GGSC co-founder Dacher Keltner researched the power of touch for human development and relationships, he discovered a surprising gender difference: when men tried to convey compassion or sympathy to women through touch, women had no idea what the men were doing.

This suggests that men are not well-versed in either compassion or touch. Research has shown that it is a little of both.

This may stem from the fact that we stop touching our boys at a certain age. In Raising Cain: Protecting the Emotional Life of Boys, Dan Kindlon and Michael Thompson state that “nurturing physical contact with a son grows more awkward and less frequent by around the age eight or nine, but the shift is perhaps most dramatic as he moves into adolescence.” Kindlon and Thompson conclude that “boys need to experience that physical tenderness if they are to speak the language later. Otherwise, we leave their touch training to football coaches, wrestling opponents, and casual sex partners.”

Dacher Keltner argues that touch is “our primary language of compassion, and a primary means of spreading compassion.” Indeed, the language of “nurturing physical contact” may be key to cultivating compassion in a child.

Paul Ekman, a psychologist who pioneered the study of emotion, admitted at a recent Conversation on Compassion that all his research, training, and clinical work didn’t help him get over his hatred for his father. How did he finally overcome this hatred? The Dalai Lama held his hand for half an hour.

Parents might not have the charismatic compassion of the Dalai Lama, but we can still incorporate nurturing touch throughout our sons’ lives to cultivate compassion, healing, and emotional intelligence in our boys.

In the trailer for the film, The Mask You Live In, former NFL player Joe Ehrman claims that “the three most destructive words that every man receives when he is a boy is when he is told to ‘Be A Man.’”  Restrictive gender roles have led to generations of men who isolate themselves, not express their emotions, and never ask for help.

“When individuals step out of their traditional, societal, or gender roles, that is going to be the vehicle for our species to survive in the future,” said Dr. James Doty, founder and director of the Center for Compassion and Altruism Research and Education at Stanford University. “Because when you step out, you are no longer constrained. You are allowed to be who you are and to thrive and flourish.”

I want my boys to have access to their full humanity, so I challenge gender roles every chance I get. This includes not only letting them dress in pink, sing songs from Frozen, and play with dolls, but also express their softer emotions, ask for help, and hug other boys.

Be a role model

Almost all the compassionate men I interviewed had a compassionate role model. This included not only family members, but also spiritual leaders—and even fictional characters. Search Inside Yourself author (and former Google engineer) Chade-Meng Tan claimed that he was motivated to be more compassionate after watching the film Gandhi!
.
Of course, a fundamental problem arises when parents are not compassionate themselves. And for boys, fathers are key role models.

For me, this problem became an opportunity. Raising my sons to be compassionate forced me to cultivate compassion myself, which in turn gave my sons a model to emulate. I concur with researchers Shauna Shapiro and Chris White, who claim in their book Mindful Discipline that mistakes hold “enormous opportunity for learning, compassion, and intimacy.” I found the most effective role modeling of compassion occurred right after I flipped my lid and lost control. This gave me a chance to show compassion for myself, and to turn from there to alleviating the suffering my anger might have caused in my son.

If fathers are not available, it is important to find compassionate male role models for boys. Father Richard Rohr believes in rite-of-passage rituals for young men, which are traditionally led by other men in the tribe. Even short of such rituals, uncles, coaches, grandfathers, neighbors, spiritual leaders, or teachers can all serve as compassionate role models for boys.

A recent paper from Timothy D. Wilson and colleagues at the University of Virginia and Harvard University revealed incredibly strong resistance in men to silence and stillness. In a series of 11 experiments with hundreds of participants, they found that men—more than women—strongly preferred doing mundane external tasks to sitting alone with their thoughts for periods that lasted up to 20 minutes. It gets more intense: One of their experiments found that two thirds of the men (compared to a quarter of the women) preferred administering electric shocks to themselves to just sitting alone and silent with their own thoughts and feelings.

Indeed, if we attached microphones to our children, we might be surprised at how much noise they ingest throughout their day. Children are inundated with sound from parents, teachers, coaches, playmates, video games, television, iPads, and radio. All this noise prevents them from developing what Daniel Siegel calls the new three Rs—reflection, relationship, and resilience. A little silence during the day allows boys to reflect, recharge, and realize the importance of listening to themselves and others.

Most of the compassionate men I interviewed spent a part of their day in silence. Dr. Daniel Siegel practices his wheel of awareness meditation every day. CEO Scott Kriens has been journaling and sitting in silence daily for the past 10 years. Father Richard Rohr practices Christian contemplative prayer. 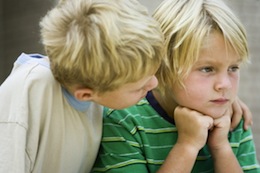 The Greater Good Science Center site is full of research about the positive effects of mindfulness for children and adults. A large part of the curriculum of Jim Doty’s Cultivating Compassion class at Stanford consists of guided meditations.

I have been consciously cultivating compassion in my sons for the last 18 months, and I can already see a difference in how they behave. Both my sons, I’m proud to say, jumped at the opportunity to feed the homeless this past Thanksgiving, and they seem more empathic. But there’s a drawback: they are can be quick to use it against us! One day, my seven-year-old son didn’t want to eat at Subway, where we were meeting friends. “I don’t want to eat Subway,” he screamed. “You are not being compassionate!” He may have had a point!