At a recent workshop I gave, a man raised his hand to tell me that his discussion partner had to “talk him down off the cliff” because he wasn’t able to feel compassion during a compassion-inducing exercise I had just led everyone through. He wondered if, as a man, his capacity for compassion was limited. 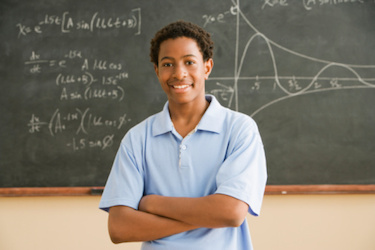 This experience spoke to me of the tragedy in our society that labels men as unable to feel or connect to the same degree that women can. And that maturity in men means emotional stoicism, autonomy, and self-sufficiency—a lonely existence, for sure, particularly as research time and again shows we all need human connection to thrive.

Yet scientists are discovering that what society says about men’s (and boys’) social and emotional abilities is simply not true, and that cultivating their natural capacity for emotional attunement and relationships is critical to their overall well-being. But we can’t wait till they’re men to do so—we need to start when they’re young.

How boys develop emotionally and socially

Studies of infants have shown that neurologically, there isn’t much difference between boys’ and girls’ capacity for empathy. Yet, according to neuroscientists, because girls are allowed to express their emotions, their ability to identify and understand both their own and others’ emotions cultivates their empathetic skills beyond those of boys.

Continuing into young boyhood, Stanford professor Judy Chu argues in her recent book When Boys Become Boys that it is culture rather than nature that incapacitates boys’ social and emotional skills. Chu observed during her two-year study of six 4 and 5-year old boys—the age at which boys generally disconnect emotionally and relationally—that the boys were very astute at reading their and others’ emotions. They also knew how to cultivate meaningful relationships, which they strongly desired.

It wasn’t until midway through Kindergarten that Chu noticed the boys becoming inattentive and inarticulate in their relationships. But rather than blaming some innate inability to relate to others, Chu saw that the boys were beginning to align their behavior with more traditional masculine norms, such as posturing, in order to impress others and maintain peer relationships.

For example, unbeknownst to the parents and teachers, the boys formed a club called the “Mean Team”—the sole purpose of which was to be mean to girls—as a way to assert their masculinity and oppose femininity. The leader of the club set the rules and directed the generally unpleasant actions of the boys. The other boys knew that to break a rule or not follow-through on an order—even if they knew it was wrong—resulted in immediate expulsion from the club and, hence, social isolation.

Yet one boy eventually chose to leave the club, regardless of the social cost, because he didn’t want to be beholden to another boy’s decisions—an action that Chu asserts shows how boys choose rather than mindlessly accept how they are supposed to relate to others against the backdrop of society’s masculine norms.

Chu also observed that as the boys got older, they began to demonstrate emotional stoicism and self-sufficiency as a way to oppose the association between femininity and the need or desire for emotional closeness. However, this behavior seemed to happen only in public as parents reported that the boys were very affectionate at home.

While Chu’s findings can’t be generalized to all boys given the small sample size of six, her two years of observations and interviews did reveal an important aspect of social-emotional development: boys, like all of us, develop their social and emotional capacities both in relationship and individually and that each boy’s experience is predicated on many factors, such as family, peer and teacher interactions, media exposure, and individual makeup. Thus, even though we all have these capacities, there is no one-size-fits-all when it comes to social-emotional development.

The importance of boys’ friendships

As boys move into teenage years, their emotional and relational capabilities appear once again in their same-sex friendships. In her book Deep Secrets on adolescent boys’ friendships, New York University professor Niobe Way describes how early and middle teen boys experience emotionally intimate friendships with each other in which they share secrets and feelings.

During her 20 years of interviews with hundreds of ethnically, racially, and economically diverse American teen boys, Way heard over and over from them that without these friendships, they would go “wacko.” In other words, the boys understood the connection between their close friendships and their own mental health.

Yet, as boys entered late adolescence, Way found that they began to experience less trust and a fear of betrayal in their male peers. They also began to internalize society’s masculine norms by equating close friendships with being gay, a girl, or immature. As a result, the boys were less willing to have a close male friend even though they all told her they wanted one. Way also noted the boys’ levels of loneliness and depression began to increase during this time.

In her analysis, Way points out that social disconnectedness is prevalent throughout American society. She cites research that found the percentage of adults who have no close friends increased from 36 percent in 1985 to 53 percent in 2004 and argues that it is our culture that distorts both boys’ and girls’ natural capacity for empathy and emotionally intimate friendships. “This is not a boy crisis,” writes Way, “but a human crisis of connection”—and one that negatively impacts our families, our schools, our communities, and our political and economic institutions.

Changing our society’s beliefs about boys’ social and emotional capacities won’t happen over night, but both educators and parents can do a lot to help them cultivate the capacities they already possess. Here are a couple of ideas:

1. Help boys both respect their need for connection and develop their emotional and relational abilities. One boy described his same-sex friendship to Way as “this thing that is deep, so deep, it’s within you, you can’t explain it…. it just happens, it’s human nature.” Both Way and Chu found that the boys were well aware of their capacity to relate to others, but that they had learned to separate their outer behavior from their deepest feelings, thoughts, and desires in order to conform to masculine norms.

As adult role models, we need to start by examining our own beliefs about emotions and relationships and whether these beliefs align with our actions. For example, do we suppress strong emotions such as compassion or sadness because we’re afraid we’ll appear weak? Or do we understand that emotions are just part of the human experience and that learning to work with them in a healthy way actually makes us stronger? Do we allow ourselves to be vulnerable by sharing our innermost ideas and emotions with our friends and encourage them to do so with us? Or do we engage with people only at the surface out of fear of being hurt or betrayed?

By reflecting on our own emotional and relational beliefs and challenges, we will be better equipped to guide boys as they navigate the social and emotional nuances of growing up in a society that expects them to behave in ways that go against their natural capacities.

In addition, teachers who cultivate students’ social-emotional skills in the classroom and parents who reinforce these skills at home send a message to boys that emotions are not unnatural or something to suppress. Rather, our emotions serve as information—helping us to navigate and nurture positive relationships.

Finally, we need to communicate to boys that having emotionally intimate same-sex friendships is part of male maturity, thus encouraging them to maintain their strong friendships with other boys as they get older. We should also share with them how much our friendships mean to us and how important friends are to our health and well-being—possibly more than our spouses and extended family.

However, it is the responsibility of the teacher to both approach the boys by expressing interest in their lives outside the classroom and to maintain the relationship. The teachers in the study who were the most successful in creating positive relationships with boys were constantly reassessing their methods for connecting with the boys and making adjustments accordingly. They also understood that these relationships take time—sometimes years—to cultivate and that giving up on the boys is not an option.

Most importantly, teachers have to be genuine in their relationships with boys. If a boy thinks that the teacher is only reaching out to improve the boy’s academic success, then the boy will pull away. “Relationships flower into engagement and productivity,” write the authors, “only when teachers authentically experience their students as valuable, likable, interesting beings: as ends, not means.”

One of my colleagues at the Greater Good Science Center recently told me a story about her second grade son who was upset that his classmates were laughing at a boy who had to step into the hallway to compose himself after getting frustrated. “I think we need to talk about how we all feel right now,” my colleague’s son told everyone.

Bravo!! I wanted to stand up and cheer because here was an 8-year old boy—past the age when boys start to shut down emotionally—who, hoping to maintain good relationships, wanted to talk about emotions. If this is an example of what’s possible, then I think we’re headed in the right direction.