Where does human morality come from?

In The Bonobo and the Atheist, renowned primatologist Frans de Waal argues that moral behavior in humans is not predicated on religion. Drawing from extensive research on animals—primarily bonobos and chimpanzees, our nearest primate relatives—as well as research on fossil records of early hominids, he shows how evidence of moral sentiments, like empathy and altruism, predate the advent of religion by millennia and co-evolved in non-human primates as well as in humans. 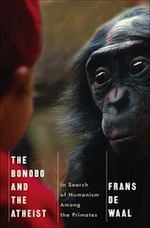 De Waal makes his case for animal morality by citing scientific studies demonstrating animal benevolence. In one experiment, researchers show that a chimp, if given the choice, would rather share food rewards with another chimp than keep it all for himself—as long as he knows that the other chimp actually receives the reward.

In another experiment with rats, researchers find that if a rat is given the choice between two containers—one holding chocolate and one holding a trapped rat who appears to be suffering—the rat will try to help the suffering rat first before seeking the chocolate. Experiments like these show that animals make moral choices and that their behavior cannot be explained through natural selection alone.

“Mammals have what I call an ‘altruistic impulse’ in that they respond to signs of distress in others and feel an urge to improve their situation,” writes de Waal. “To recognize the need of others, and react appropriately, is really not the same as a preprogrammed tendency to sacrifice oneself for the genetic good.”

De Waal also engages readers with stories of individual primates who have demonstrated a capacity for kindness, generosity, and gratitude. For example, Georgia, a chimp at the Yerkes National Primate Research Station, expresses gratitude to deWaal by greeting him with quick panting noises, “which is about the kindest sounds a chimp can make,” after he helps reunite her with her troop following a long separation. In another instance a bonobo named Makali is kindly consoled by fellow bonobos following a rival attack. These examples of animal empathy may be contingent on the presence of mirror neurons in the animals’ brains—the same neurons found in human brains that are implicated in emotional resonance—which help the animals understand how another is feeling.

Since altruism, empathy, and gratitude all underpin moral behavior, finding them in our fellow mammals suggests that they run deep in our brain biology and did not come about because of moral reasoning or religion. In fact, probably the opposite is true—religion developed because of our innate capacities for caring. But, while some scientists might use this information as ammunition to hurl against religion, DeWaal does not. Instead, he writes disparagingly about strident atheists who rail against the existence of God, making enemies of the religious while doing little to promote humanistic values.

“Humanity cannot and will not change on a dime, and it’s also not as if religion is an alien influence,” he writes. “It is very much our own creation, part of who are, fully intertwined with our respective cultures. We had better get along with it and learn from it, even if our goal is ultimately to set out on a new course.” 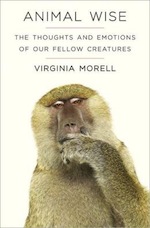 Virginia Morell takes a slightly different, but related tack in her new book, Animal Wise: The Thoughts and Emotions of Our Fellow Creatures. Morell, a science writer, traveled around the world to meet with scientists studying animals in their social environments and found that many of these researchers have evidence that their subjects can think and feel much the way humans can.

In the first chapter we learn of Nigel Franks, a scientist who studies ant colonies. By looking at the behavior of individual ants (whom he painstakingly labeled with tiny dots), he has found they don’t rely on pheromones alone to communicate, but can teach other ants by example and demonstrate amazing patience with their students. We also learn that rats engage in play like puppies do, and that they make a noise that resembles laughter—albeit, laughter that is not audible to human ears without special listening devices.

“Their joyful chirps were ricocheting all around us, but we couldn’t hear a bit of it,” writes Morell. “If there was a moment that encapsulated all that we don’t know or miss about animals, for me, this surely was it.”

Her point, well taken, is that in our attempts to study our animal brethren and avoid anthropomorphizing them we sometimes miss their very real similarities to us. According to the scientists Morell interviews, birds are capable of complex communication, elephants have long memories and strong social networks, and dolphins will act altruistically. These scientists are convinced that many higher order cognitive abilities are not limited to humans, and that we only need look a bit further to discover them in animals.

We humans like to think we are supremely evolved. But even if some of our capabilities are advanced, that doesn’t mean the animals around us aren’t also evolving, writes Morrel. The more studies confirming animal intelligence and feeling, the more evidence there is for supporting a dichotomy rather than hierarchy of evolution—a finding that de Waal also supports, at least in relationship to mammals.

The consequence of books like these is that we may need to re-think our place in the animal kingdom and show a little more humility. Perhaps, if the lessons of these books are taken to heart, we will be inspired to be more considerate of animal needs and protective toward our shared natural world.