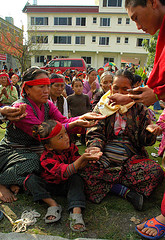 Help for the poor at a Tibetan Buddhist monastery in Nepal. © Wonderlane

Last week, we reported the results of a GGSC-sponsored study about the relationship between compassionate action and religious belief.

The results? People higher in compassion performed real world acts of kindness more frequently than those with less—which is no surprise. But this effect turned out to be much stronger in less religious people than in highly religious people, which some might not expect.

Some commentators on Facebook and elsewhere heard this result as meaning that religion makes people less compassionate. But it actually means compassion simply doesn’t play as strong a role in prompting religious people to act kindly in the world.

I was invited to discuss the study on “The Big Picture with Thom Hartmann,” which titled the segment, “Who’s more compassionate… atheists or fundamentalists?” But, as I hope comes through in the segment, the results are more complicated than what the title suggests.

In fact, the results show that highly religious people exhibited more kind acts in the world, regardless of how compassionate they were.

In the experiment, people were brought into the lab and shown videos, one evocative of compassion and the other neutral, then asked to play a money-sharing game. Again, feelings of measurable, momentary compassion drove non-religious or less religious people to be more generous. But that didn’t matter for highly religious people—whether they saw the neutral video or the compassion-inducing one, they showed the same levels of sharing.

Researchers also looked at people’s behavior during several economic exchange games, and asked the participants to rate themselves on how compassionate they felt in the moment. Consistent with the earlier two results, highly religious people were generous and cooperative in the games regardless of how highly they rated themselves on momentary feelings of compassion, while less religious people were much kinder if they felt greater compassion.

The moral of the story? It’s not that being religious prompts less or more compassion; it’s that highly religious peoples’ altruism is less tied to experiences of compassion. But among atheists, agnostics, and casually religious people, compassion seems to play a much more important role in prompting kind, generous, cooperative, and benevolent behaviors.

To be fair, the study was misunderstood because
the press release is horribly misleading/poorly
written. From the press release: “When they
looked into how much compassion motivated
participants to be charitable in such ways as giving
money or food to a homeless person, non-believers
and those who rated low in religiosity came out
ahead”

another quote from Dr. Willer: “Overall, this
research suggests that although less religious
people tend to be less trusted in the U.S., when
feeling compassionate, they may actually be more
inclined to help their fellow citizens than more
religious people”

This doesn’t seem to be consistent with the actual
results of the study (under compassion, less
religious weren’t more generous, they were equally
generous).

How do you read these without inferring that the
less religious are more generous?

Although I am both Catholic and Tibetan Buddhist I
am very skeptical of unexamined assumptions that
various practices and beliefs cause compassionate or
altruistic action.

My skepticism took a pretty big hit when I saw
chapter 14 of “American Grace,” Putnam and
Campbell’s historic study of religion in America.
Frequent churchgoers were found to be WAY more
generous.  Some details are in my most recent blog
entry at http://stevendeedon.wordpress.com  .

Why is everyone dancing around the obvious?  Religious believers fear punishment from their punitive god.  They believe good works will get them in good with the big guy on judgement day.  Talk about self-serving behavior.

JT:  It’s utterly irrelevant whether there’s some self-concern involved, especially when frequent churchgoers are FOUR TIMES (400%) as generous as those who rarely if ever attend.  Read the numbers (there may be no sociologist in American more respected that David Putnam).

Perhaps the most telling of this article is the reactions to it- To call the motivations “self serving out of fear” is missing the point.  I am personally not surprised how the obvious result would be twisted by the press.  (Hint:  It is not fear that drives religious folks to be more giving to those in need on a consistent basis; rather it is the belief in something greater then themselves).

Perhaps this article instead has uncovered something even more interesting?  Like, oh, maybe, say… resentment of the apparent results that all those self-serving, fearful “religious” folks instead, actually do make the world a *better* place?  Gasp—Nooooo!