“Happiness is never better exhibited than by young animals, such as puppies, kittens, lambs, and company, when playing together, like our own children,” writes Charles Darwin in his 1872 classic, The Descent of Man. Most animals have been observed playing, and play does seem to make them happy. But research has also shown that play is a serious business, and many researchers argue that it has evolutionary significance, essential for developing a host of social, physical, and psychological skills.

For instance, Marek Spinka, who studies animal behavior in Prague, and his colleagues have recently argued that play helps animals prepare for the loss of balance they experience when chased by predators, or it can help them deal with the emotions they feel after losing an aggressive interaction. Play, in short, prepares the brain to handle the unexpected. 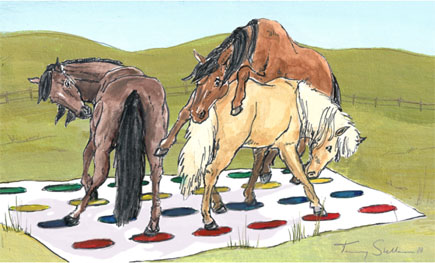 University of Colorado biologist Mark Bekoff has even suggested that play may contribute to the development of morality. In their playful games, animals can learn about the need for fairness and the consequences of cheating, such as social ostracism. As Bekoff writes in a 2001 article, “During social play, while individuals are having fun in a relatively safe environment, they learn ground rules that are acceptable to others—how hard they can bite, how roughly they can interact—and how to resolve conflicts. There is a premium on playing fairly and trusting others to do so as well.”

Neurological research has also hinted that play may contribute to healthy brain development. Scientists have discovered that rodents placed in environments with running wheels and other play structures show greater brain development than rodents who don’t have such opportunities to play. In other words, playing around makes rodents smarter.

This insight has ramifications for humans. Tests on rodents have shown that the mental and physical stimulation they get from playful environments can slow down or delay symptoms of several neurological diseases, including Alzheimer’s. Other research has shown that play in rats activates molecules in the brain that can facilitate learning and memory.

Whatever the evolutionary functions of play, we know that birds and mammals do it—and there is even some evidence that reptiles, fish, and insects do it, too. In our tour of the animal kingdom below, we can see how some animal play seems to have a concrete purpose. But other times, animals seem to play for much the same reason humans do: because it’s fun.

Baby horses have been observed playing within two hours after birth. They especially enjoy exaggerated galloping and playfully nipping at their mothers during their first days of life. After a few weeks, young horses frolick with other foals and enjoy chasing and circling each other, and tossing around objects like sticks, boards, rags, paper, and buckets. At one month of age, colts and fillies develop different play styles, in preparation for the gender roles they will adopt later in life: Colts spend much of their time playfully fighting and mounting others; fillies, on the other hand, mostly engage in locomotor play, which includes galloping and mutual grooming.

More than a century ago, Charles Holder, a zoologist and biographer of Charles Darwin, was the first of many researchers to report that, even when no predators are in sight, fish enjoy playfully jumping over everything from twigs to turtles. While proof that fish play is far from conclusive, some experts believe this leaping behavior constitutes play because it takes place during the calmest days, when fish are not concerned about food, mates, or safety. But it’s easy to imagine how honing their jumping skills can serve them well in more serious situations.

Kangaroos love to play-fight as soon as they leave the pouch. Baby kangaroos, called joeys, are often seen sparring with their mothers. Their stylized boxing isn’t dangerous. Older partners self-handicap when they play with joeys by standing flat-booted and pawing, instead of throwing hard punches. They also use a head-shaking signal to communicate that they are only playing. Males are known to play-fight 30 times more than females, and when they get older, their boxing skills play a large part in establishing who will be the leader in their social group (also known as the “boomer” of the “mob”), a coveted rank that earns them the most access to females for mating.

Play occupies an inordinate amount of a raven’s time. Young ravens play with virtually any new kind of object they encounter: leaves, twigs, pebbles, bottle caps, seashells, glass fragments, and inedible berries. This kind of play seems to help familiarize them with new objects, distinguishing the safe objects from the threatening ones. Adult ravens display similar behavior, but when they approach something, such as a new food source, that they haven’t encountered when younger, they show great trepidation.

“On fine, calm days when they are feeling no hunger or any other cause of anxiety,” wrote seminal ant researcher Auguste Forel in 1929, “certain ants entertain themselves with sham fights, without doing each other any harm; but these games come to an end directly [if] they are scared. This is one of their most amusing habits.” Today experts believe that these mock fights prepare ants for combat and courtship contests, which are key events in their lives.

Biologists John Byers and Curt Walker have studied locomotor play among mice—their leaps, jumps, twists, shakes, and similar physical actions—and found that mice start playing at about 15 days of age, and their locomotor play activities peak at days 19 to 25. This timeline corresponds closely with the development of synapses in their brain’s cerebellum, which plays a critical role in muscle movement and coordination. However, it’s unclear whether play spurs this brain development or vice versa, though this is certainly an area ripe for exploration.

So good to read this! Now, can you do a follow-up on children…We need them to horse around a bit more, no?

@MC: Definitely. Along with this piece on animal play, we also published this essay making the case for encouraging more horsing around among kids: http://greatergood.berkeley.edu/article/item/can_we_play/