Recent American politics has been defined by a series of bitter power struggles, in which the Bush administration is accused of overstepping its authority and its critics do their best to curb its power. In such conflicts we can see traces of countless earlier struggles, from the American Revolution to Watergate. Similar struggles for dominance and power take place in countries all over the world, and we even see them crop up in our local communities and family life.

Because they seem so universal, we have to consider that these problems might be intertwined with our genetic code, that they’re part of our evolutionary history. Indeed, if we are to fully understand why and how these conflicts arise, we must examine what comes naturally to us as a highly political species: Are humans predisposed to live freely, side-by-side as equals? Or are we more likely to form hierarchies where one person or group tries to dominate or subjugate another? 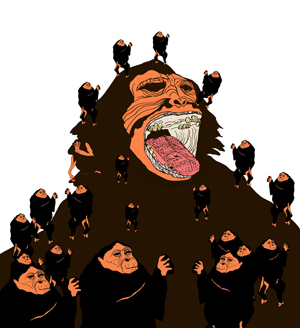 This question has generated longstanding philosophical disputes, but we now have enough data to propose some definite answers. Discoveries in the fields of anthropology and primatology suggest that though we may have a deeply rooted instinct to exert power over others, we also have what may be an equally strong aversion to abuses of power, along with some natural tendencies to punish people who commit those abuses.

Consider this fact: Before 10,000 years ago, only egalitarian societies existed on our planet—tiny societies with no strong leaders at all. Keeping in mind that gene-selection requires at least a thousand generations to change our nature significantly, we must assume that most of our genes have evolved from the genetic makeup of people living in these small Paleolithic bands. This includes our “political genes,” if I may call them that. Yet, of course, we do not only see egalitarian societies in the world today; we also see nations ruled by fierce despots. So, somehow, prehistoric egalitarians set us up to live not only in egalitarian democracies but in these despotic nations as well.

I am careful to say “set us up,” for we are not speaking of hard-wired, innately-fixed patterns of action like an eyeblink or an uncontrollable scream of fear. Rather, we’re talking about soft-wiring—behavioral propensities that make it very easy to learn certain kinds of behavior rather than others.

Over the years, researchers have tried to hypothesize what our soft-wired political and social propensities may be. But it was only in 1987 that Harvard primatologist Richard Wrangham made a major breakthrough in his study of how human behavior relates to that of our closest primate relatives. In view of the fact that humans, gorillas, bonobos, and chimpanzees share a recent ancestor and more than 98 percent of their genes, Wrangham determined that any behaviors all four of these species exhibit today must also have been present in their shared predecessor, which would have lived about seven million years ago. He called this ancient ape the “Common Ancestor.”

Wrangham identified some social behaviors shared by all four species, including the tendency to live in groups and the willingness to attack members of the same species. But with respect to the Common Ancestral uses of power, he faced a problem: Bonobos, chimpanzees, and gorillas were distinctly hierarchical, with aggressive alpha males; by contrast, human hunter-gatherers were egalitarian, suggesting that our species lacked both innate hierarchical tendencies and tendencies to develop leaders. This inconsistency made it impossible for Wrangham to determine how this ancestor used power, and therefore made it difficult to offer any definitive conclusions about human nature.

Puzzled by this human anomaly, I surveyed almost 50 small, nonliterate cultures—both bands and tribes—to see exactly how egalitarian they were, and why. I discovered that their egalitarian political arrangements were quite deliberate. They believed devoutly in maintaining political parity among adults. This belief was so strong that males who turned into selfish bullies, or even tried to boss others around for reasons useful to the group, were treated brutally, as moral deviants. The fact that on all continents, hunter-gatherers faced bullies or self-aggrandizing political upstarts—and faced them in spite of these strong egalitarian beliefs—told me that if these people had not so vigilantly worked against inequality, they would have soon turned hierarchical.

This new interpretation meant that by nature, today’s hunter-gatherers were prone to try to dominate one another, just like the other three species of living apes—and therefore so were the Common Ancestor and humans all down the evolutionary line. In fact, because this urge to dominate is so intrinsic to humans’ political nature, hunter-gatherers who wish to stay egalitarian have to use not only ostracism and shaming but also ejection from the group—and sometimes even capital punishment—to hold down power-hungry political upstarts. We must ask, then, why a species so inclined to domination has been motivated to insist that power be shared so equally. And here, I believe, is the answer: Just as all four of the aforementioned species have strong propensities to domination and submission, so do they also naturally resent being dominated.

This is obvious enough in a human hunting band, where upstarts who attempt to dominate others are dealt with so harshly. But it’s also obvious with chimpanzees that have been studied extensively: Both wild and captive males are extremely ambitious politically, and they invariably form political coalitions to try to unseat the alpha male. More striking is the fact that large coalitions can form in the wild to challenge domineering former alphas and run them out of the community. Emory University primatologist Frans de Waal’s studies with captive chimpanzees show that females, too, can band together to partially control their alphas. Captive gorillas, like wild and captive chimpanzees, may attack a dominant silverback they don’t like. And bonobos have relatively small female coalitions that routinely raise the power of female subordinates to a degree that puts females virtually on a par with the individually-dominant males in competitive situations.

Because such rebellious behavior is found in all four primate species, this means the roots of this behavior appear to stretch back at least seven million years. The Common Ancestor not only disliked being dominated; it ganged up actively in coalitions to cut down the power of its alphas or would-be alphas. And once we recognize that humans throughout prehistory have had to cope with this tension between attraction to power and desire for social parity, it’s much easier to see why power has always posed such a problem for our species—and why there can be such variety in human expressions of power today.

Nations are so large that it takes considerable concentration of power at the political center just to make them run, and they come, basically, in two “brands.” At one extreme is a centralized, autocratic government that has so much military or police power that it can impose degrees of political control beyond a chimpanzee alpha-male’s wildest dreams. Typically, people ruled in this way—whether in the former Soviet Union or contemporary Iran—are highly ambivalent about the authority above them.

As a practical matter we may, of course, see benefits in having a strong, highly powerful figure govern us, especially when our groups become large and unwieldy. And if those in power are both generous and sensitive to people’s natural inclinations to dislike being dominated, even a strong dictatorship may be popularly accepted as “benign.” The problem with this unguarded approach is that the next strong leader to come along may be a selfish individual with despotic tendencies.

At the other extreme is our American democracy, in which people realize they need to be governed by a central authority but are determined to keep their leaders from accumulating power beyond what is necessary to keep the nation functioning. The basic assumption about human nature is that leaders will just naturally want to aggrandize their power. That’s why all democracies write checks and balances into their constitutions, which curb the power of leaders and guarantee rights to citizens. Democratic nations are never as egalitarian as hunting bands, yet the political dynamics are similar. For instance, just as an arrogant hunter can be deposed as band leader, Richard Nixon’s abuse of power led to his being forced to resign from office.

I do not mean to oversimplify the picture. As psychiatrist Erich Fromm has claimed, people may sometimes appreciate a powerful and even ruthlessly despotic leader. And long before Hitler came to power, sociologist Max Weber argued that people may submit their autonomy to an especially charismatic leader. (Think not only of Hitler but of the revered Japanese Emperor Hirohito, a figure like Lenin, and perhaps, to a lesser degree, President Hugo Chavez of Venezuela.) But of course, many despots are without charisma and use bald coercive force to dominate resentful populations. In such situations, change may come either through violent revolution or, often enough, by historical evolution when a tyrant like Stalin dies.

For the most part, though, human history has rebuffed the claims of those political thinkers, most notably Thomas Hobbes, who have assumed that strong, authoritarian leadership is required to rule our inherently unruly species. Humans became both anatomically and culturally modern at least 45,000 years ago, and it’s a safe bet that the main political behavior we see today in foraging bands—their uniform insistence on keeping their political life reasonably egalitarian—goes even further back than that.

In effect these egalitarian bands did something very special about the problem of power. They arrived at a largely implicit “social contract,” by which each political actor conceded his personal pursuit of dominance in order to remain at political parity with his peers. In doing so, hunter-gatherers were able to cooperate effectively because their societies were so small. Similarly, a large national democracy can do its best to vigilantly limit power and uphold civil rights. But just like a hunting band, it must watch carefully for would-be dictators in order to pre-emptively curb their power if need be, and stand up to them decisively if they do get the bit in their teeth.

This theory about our political evolution helps us understand why we are so often ambivalent about power. Our genetic nature makes both its abuse and our counter-reactions equally likely. And if these counter-reactions don’t come strongly enough and in a timely fashion, this may bode badly for a nation’s citizens, subjecting them to harsh restrictions of their pursuits of liberty and happiness. Indeed, if that nation happens to be a world superpower, this can have disastrous consequences for an entire world of nations.