Laugh and the whole world laughs with you. Yawn, and so will your dog. 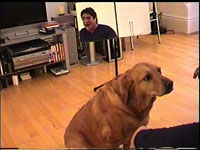 A recent study published in the journal Biology Letters found dogs yawn when humans do, suggesting that canines may have the capacity for empathy.

In their experiment, researchers from the University of London yawned at 29 dogs. Seventy-two percent yawned back—a higher frequency than humans, who typically yawn back 45 to 60 percent of the time. 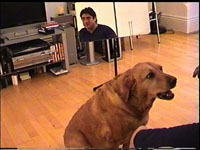 When the researchers simply opened their mouths wide, no dogs yawned.

The researchers speculate that this kind of “contagious yawning” may be a rudimentary form of empathy. Atsushi Senju, one of the study’s authors, notes that humans who are more susceptible to contagious yawning score higher on tests that measure empathy. What’s more, people diagnosed with forms of autism, a disorder characterized in part by difficulty empathizing with others, don’t demonstrate contagious yawning. 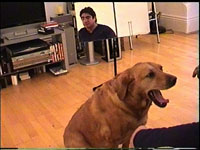 Previous research has documented contagious yawning in humans and chimpanzees, but this is the first study to observe contagious yawning among nonprimate species and between different species. Senju says their results might suggest that “the capacity for empathy is widespread throughout various mammal species.”