Every fall, college freshmen begin the familiar tradition of establishing friendships with classmates in their dormitories.

But little do they realize how much choosing the right friends—notably, ones with empathy—could be beneficial during stressful times, says a new Stanford study published in Proceedings of the National Academy of Sciences.

“The transition to college can be tumultuous,” said Jamil Zaki, an assistant professor of psychology at Stanford and co-author of the study. “Whom you end up making friendships with can play a significant role in how you’ll deal with the stress and hardship of freshman year.” 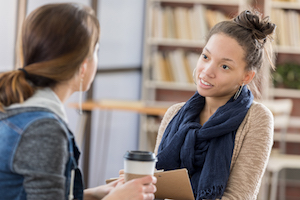 Stress is a natural reaction for college students, but knowing how to manage that stress is an important factor in a student’s success. A 2008 poll conducted by the Associated Press and mtvU found that 40 percent of college students said they felt stress regularly—and almost 1 in 5 seriously considered dropping out of school.

With those high stress levels in mind, the researchers, including Stanford economics professor Matthew Jackson and former Stanford doctoral candidate Desmond Ong, put nearly 200 Stanford freshmen—who had recently moved into first-year dorms—through a battery of personality tests and questionnaires. Students also answered questions related to social networks within their dorms, such as “Who usually makes you feel positive?” or “Who do you turn to when something bad happens?”

In contrast, when students wanted to feel positive and have fun, they were more likely to seek out dorm mates high in happiness. This suggests that students’ personalities are related to the different roles that they play in supporting their communities.

“What we find here is not only that people’s networks of fun-based friendships are denser than their more trust- and stress-based networks,” Jackson said, “but also that more central people in a network have personalities that match the purpose of that network in intuitive ways. ”

Just as you need the right outfit for a particular occasion, college freshmen need certain friends for certain situations.

When you need a dose of fun, engaging with a positive and happy friend can lift your mood. But that friend may not be the best person to go to when you need someone to confide in. An empathic friend, on the other hand, may be just the right person for helping you through difficult and challenging times.

“Empathic individuals were more likely to help their dorm mates and provide support during difficult times,” said Sylvia Morelli, an assistant professor of psychology at the University of Illinois at Chicago and lead author of the study. “These freshmen became magnets for close relationships in their new dorms.”

“Empathic people are the ears and shoulders of these communities,” Zaki said.

This research shows that people know the difference between these two types of individuals. They spend time with individuals high in positive emotion, but target empathic individuals when they are stressed.

“The study offers an opportunity for college students to examine their own relationships,” said Morelli, a former postdoctoral fellow in Stanford’s Social Neuroscience Lab, “especially against the landscape of social media where they can have seemingly countless ‘friends’ across the country and the world. Our work suggests that people will turn to only a small handful of these friends when things get stressful, and that they will trust their friends who show empathy and concern.”