On Monday, we published a research brief, “How Anxiety Reduces Empathy,” that provoked some conversation and disagreement among readers.

“I thought empathy increases stress and anxiety,” wrote one person—especially, she believed, if we empathize with people in a bad situation that we don’t have the power to improve. Another wrote on our Facebook page, “My anxiety tends to be worry over how my actions affect others.” 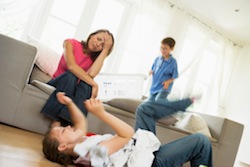 One reader cited another recent study of anxiety and empathy published in an Israeli scientific journal. That one confirmed a hypothesis that “high socially anxious individuals” tend to be more empathic and skilled at reading other people’s feelings. This, felt several readers, “contradicted” the study we covered. How can stress limit empathy if stress-prone people tend to be more empathic?

But a closer look at the studies in question reveals that there is no contradiction—and the reason why helps us understand the relationship between our inner states and our social world.

The first of the series of six experiments we covered on Monday induced negative emotions like anxiety, anger, disgust, or surprise in people by asking them to write about experiences associated with those feelings. Then they were tested in their ability to see the world through another person’s eyes—for example, by asking them to judge whether “the recipient of an email would read it as sincere, when they had privileged information suggesting it was sarcastic.”

This experiment, and subsequent ones, found that the more anxious or surprised they were—states associated with stress—the more self-centered (or “egocentric”) they became. This wasn’t true when they were made to feel the other emotional states, like disgust.

Why? As the writer of the research brief, Kira Newman, reports:

The researchers found a clue in a final pair of studies: Participants were also more egocentric after induced to feel uncertain, and surprise and anxiety are both associated with uncertainty. While anger makes us certain in our righteous indignation, anxiety and surprise make us unsure of what’s going on and what will happen next. And when we feel uncertain, we tend to fall back on what we know to be true—namely, our own perspectives and feelings.

The critical thing to understand is that these experiments were measuring how people responded in specific situations—they were not assessing personality traits. Stress is a natural human response to threatening situations, including uncertain ones, but some people are more prone to feeling it than others. Some people are simply very anxious individuals; others are more laid back. This particular study was not interested in trait anxiety. Instead, they were creating, or asking participants to remember, stressful situations, and then looking at how that specific circumstance affected empathy.

The Israeli study mentioned by our reader is quite different in its questions, methods, and everyday implications. The researchers assessed participants’ personalities using a scientific scale that measures social anxiety, along with self-rating scales that measure empathy. Participants then took a test (not unlike our own emotional intelligence quiz) designed to measure their accuracy inferring people’s inner states based on their faces and voices—a skill scientists refer to as “cognitive empathy.”

They found that stress-prone people were good at cognitive empathy—in other words, accurately identifying inner states based on outer clues. But there’s a critical caveat, for the purposes of our discussion: They weren’t as good at “affective empathy.” That’s a science-y way of saying that they could recognize an emotion, but they weren’t necessarily feeling it themselves.

This makes perfect sense, in the context of the research to date. Stress mobilizes the body’s resources to survive an immediate threat. Among other effects, it helps narrow our attention and zero in on the threat. If you’re prone to be socially anxious, meeting strangers stresses you out.

That’s why anxious people can appear to be shy; they’re simply avoiding stressful stimuli, often going deep rather than wide in their social networks. Walking into a party or asking for help from people can take enormous courage. In those moments, their bodies are flooded by hormones that help them focus on threats—threats that are embodied in the faces of other people. This helps with cognitive empathy.

But I bet the reason why their affective empathy goes down is that they’re momentarily denying themselves access to their own inner states. Their attention sharpens and goes outward, which makes perception more accurate. But at the same time, they’re instinctively protecting themselves from getting caught up in the feelings they detect. This might help make socializing emotionally manageable. It might also make them seem cold or just a little stiff, in addition to shy.

The Israeli study is not the first to suggest that trait anxiety can be positively correlated with elevated empathy. In a previous article, called “Is it Possible to Love All Humanity?”, Greater Good even covered a study suggesting that people who are more likely than others to extend their empathy beyond their immediate social circle tend to be much more anxious. That link is fairly solid, but the science is still unclear about causality. Does elevated empathy make people more anxious, or are anxious people more prone to empathize with others? We don’t know. And in science, “We don’t know” is an exciting thing to admit.

That said, studies seem to contradict each other all the time, creating uncertainty that can be, well, stressful. This doesn’t reveal imperfections in the scientific method. In fact, we’re seeing the scientific method at work. The human mind is really, really, really complex, and as former GGSC director Rodolfo Mendoza-Denton once wrote, “it doesn’t give up its secrets easily.” Seemingly contradictory studies raise more questions and can generate new hypotheses.

Our reader is absolutely correct that, as C. Daryl Cameron and others have discussed in our pages, people will cognitively turn off empathy and compassion when they feel like they can’t help someone, in an effort to head off the anxiety caused by distress in others. But as the research makes clear, you can learn to manage your anxiety in a way that helps you remain open to seeing and addressing the needs of other people. It’s a skill, like driving a car or baking a pie. So, yes, feeling anxiety can reduce empathy. But not always, and not in all people, and stress does not necessarily reduce all kinds of empathy equally.

This is all of a piece of the larger questions we grapple with here at the Greater Good Science Center. At the heart of the organization is an argument: Research suggests humans want to live in a world that is caring and compassionate. Indeed, why wouldn’t we? However, there are circumstances that limit our willingness or ability to care for each other. Much of the research we cover is devoted to the question of what circumstances allow the good to flourish while discouraging the bad.

Certainly, it makes intuitive sense that a stressed-out, anxious, uncertain society might be a less empathic and caring one. But it helps to have scientific evidence to bolster the case for public and workplace policies that might make our lives less stressful—and thus, we hope, more compassionate.