For many parents, the truth is hard to admit: Adolescents begin to rely less and less upon the adults in their lives and more heavily on their peers. Starting to let go is difficult. But teens’ reliance on buddies is good for their development and sense of belonging.

A new study found that this is especially true in the immediate aftermath of a stressful event, like failing a test. Researchers from Australia’s Murdoch and Griffith universities surveyed teens in real time throughout the day and found that, after something bad happens, they cope better emotionally when they’re with peers rather than with adults. 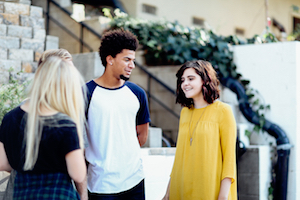 “Being among peers during times of stress may offer adolescents an open, supportive and rewarding space which may help dampen the emotional turbulence that adolescence can bring,” the researchers write.

They collected data from 108 boys and girls ages 13 to 16, who attend a socioeconomically disadvantaged school in Western Australia. Five times a day, for seven days, the teens completed online surveys sent to their smartphones during and after school, though not during class periods.

Each survey asked the question, “Since you were last messaged, has anything bad happened to you?” The teens rated their recent experience between 1 (“Sort of bad”) and 5 (“Very bad”) and offered a brief description of it. They also reported how happy, sad, lonely, jealous, and worried they were feeling, and whom they were with.

Lead study author Bep Uink said that while the participants experienced “typical adolescent stressors” like breaking up with a partner or failing a test, they also reported additional stressors, such as being pressured into sex, facing racism, recovering from a fight, living in one home while siblings live in another, being responsible for getting younger siblings to school, and working night shifts to earn extra income.

They consistently found that teens who were with (or were communicating online with) friends in the time immediately following a stressful event reported lower levels of sadness, jealousy, and worry—and higher levels of happiness—than those alone or with adults. Whether they were with friends in-person or online didn’t seem to matter.

These benefits—from being with friends (vs. family) after a stressor—seemed to be even more pronounced for girls than boys. Girls’ interactions often entail talking with one another, Uink explains, while boys frequently interact during a physical activity. “Girls expect to receive more peer support than boys,” she says, whereas boys are “less likely to be chatting in small groups, overall.”

How do peers comfort each other? “Social support and distraction may be some of the ways that peers help youth navigate the ‘ups and downs’ of daily life,” speculates Uink. In other words, peers can encourage teens, cajole them out of a bad mood, or simply take their mind off worries.

While educators, parents, and other adults may feel responsible for soothing teens’ stress, Uink also encourages them to help young teens cultivate their power to help each other. This might mean learning social skills like kindness, empathy, or compassion.

Uink, who undertook the study as part of her Ph.D. dissertation, emphasizes the importance of studying lower-income youth, who are typically underrepresented in research.

“Economically disadvantaged youths report higher rates of exposure to daily stressors,” she and her colleagues write in the International Journal of Behavioral Development—so these findings are particularly relevant to their lives.