It’s been a hectic day at the office—again. Unbeknownst to you, your wife also had a rough one dealing with disgruntled customers and extra responsibilities. Here’s the test: When she walks in the door, will you still be able to offer the attentive ear and comforting hug that she needs?

It turns out that the answer might depend on how she communicates her stress, and how her words make you feel. A new study out of Switzerland found that stressed men have trouble supporting their stressed partner when she is more emotional, perhaps because they feel overwhelmed by all the negative feelings. 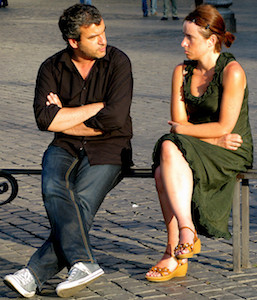 In the study, researchers observed 198 young, heterosexual couples living in Switzerland to see how they would support each other under stress. One or both partners were subjected to the Trier Social Stress Test (TSST), one of the most stressful experiments you’ll find in a lab. They were given five minutes to prepare for a mock job interview, a four-minute speech on their strengths in front of two “communication specialists.” (In reality, these “specialists” were trained accomplices who heckled the participants, rolled their eyes, and looked bored no matter what.)

Then came a math test: subtracting 17 from 2,043 as quickly as possible while more “experts” criticized them for being too slow and forced them to start over after each mistake. In some cases, people who go through this diabolical experiment see their cortisol levels rise by 400 percent.

The poor couples probably thought the experiment was over then, but in fact it had just begun. Whoever had endured this harrowing ordeal returned to a waiting room to meet their partner and sit together for eight minutes while researchers “checked the data.” In fact, their interactions were being videotaped and would later be rated for how the partners were communicating stress and supporting each other (or not).

Both men and women were extremely supportive in all situations—except one. When both partners were stressed out by the TSST and the women expressed lots of emotion, the men were significantly less supportive. An I’m a wreck! or They must think I’m a complete idiot! from the women would be met with fewer hugs, less empathy, and more hostility, ambivalence, or dismissiveness from the men (Come on, it wasn’t so bad! or I know…so what should we have for dinner tonight?).

But in every other case—when men hadn’t taken the TSST and weren’t stressed, or when their partners were using more matter-of-fact language (I had to do math!)—men’s supportiveness was comparable to women’s. Something about the particular combination of feeling stressed and being confronted with their partner’s negative emotion seemed to be too much for the men to handle.

And this wasn’t because women were overly emotional. According to researchers’ analyses of the eight-minute conversations, women expressed stress in emotional ways around 6-8 percent of the time, while men got emotional 5 percent of the time. Men and women were communicating stress similarly, but the women didn’t suffer from a breakdown in support like the men did.

“When we take into account the fact that lots of couples do feel pressured…then we can see that the opportunities for stress to work their way into the very fabric of our intimate bonds are plentiful,” says coauthor Thomas Bradbury, citing struggles like unemployment, child rearing, and both partners working outside the home.

The good news is that men were just as supportive as women most of the time. For both genders, exercises like Active Listening can help spouses learn to validate their partner’s negative feelings by showing that they hear and understand them. But those who still feel overwhelmed can take relationship researcher John Gottman’s advice: Let your partner know you need some time to soothe your own feelings, and come back to the conversation later.

“Partners [can] either reach out a bit more to check in with the partner to assess his or her stress, or (as a stressed person) try to approach the partner in a way that enables the partner to be an effective ally,” says Bradbury. “Then they can keep these outside influences in check and preserve and even maybe deepen their connection to one another.”