Good leaders surround themselves with team members who are smarter than they are, experts say. They don’t let their ego get in the way of choosing the best people for the job.

And the same might be true of happy people, too. According to a new study published in Personality and Social Psychology Bulletin, happy people are less influenced by social comparison—comparisons between themselves and others—when deciding who to spend time with. Like good leaders, they aren’t deterred from being around people who might seem smarter than them, and they reap the benefits of good company. 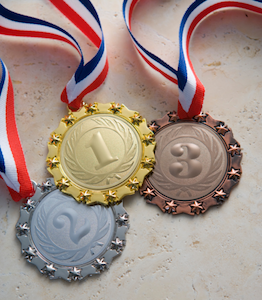 In a series of studies, researchers invited Korean undergraduates to imagine they got a mediocre score on a test. Next, they envisioned receiving a text message from a friend, who either performed better on the test and had a happy disposition, or performed worse and was generally unhappy.

It seems like happy people aren’t troubled by seeming to do worse than friends, but could something else be going on? The researchers conducted another study to tease out the role of self-esteem, which could be the true influencer: Perhaps people high in self-esteem—who tend to be happy—don’t feel intimidated by their superiors, and that confidence is what actually protects us from unfavorable social comparison.

Yet again, even after controlling for self-esteem, the results held: Happy people were more willing to socialize with happy-but-smarter friends, while unhappy people showed no preference. The participants this time were American, extending the findings to a second culture.

Before concluding their analysis, the researchers had another possibility to eliminate, the one contained in the adage “Misery loves company.” Maybe people feeling down take comfort in hanging out with other unhappy people, who (in these studies) just happened to be the “inferior” ones.

To test that hypothesis, the researchers presented participants with a different choice: to meet up with someone who is happy but failed the test, or someone who is unhappy but aced it. When 75 young Koreans pondered that choice, the results were clear: Happy and unhappy participants alike preferred to spend time with the happy/inferior friend; misery didn’t love company.

Underlying these studies is the notion that spending time with the happy friend is the better decision—a notion that might be difficult to hear if we ourselves are the unhappy friend, but one that research nonetheless supports. Happy people, says the research, are more helpful, more generous, and more cooperative. They judge their friends more favorably, and they tend to be more sociable, attentive, friendly, and warm. Their positive mood can be infectious, triggering all its benefits in us.

For this reason, the researchers suggest that choosing to spend time around happy and high-performing companions—two traits that often go hand in hand, considering that happiness can spur success in life—is one of the ways that happy people stay happy. Of course, there’s another way of seeing the results: We can cultivate awareness of our natural bias for happy people, and deliberately make an effort to hang out with unhappy ones, which could help them over the long run. Just be sure to balance that out by spending time with some positive people!

“Happy people are hedonically wise and understand the benefits of staying connected to socially resourceful companions,” the researchers write. “They simply know better whom they should spend time with.”