Sometimes we only realize our deepest values once we’ve contradicted them.

For Tina, an up-and-coming African-American woman and associate professor at a prestigious private university, one of those moments came just after she had earned a coveted administrative post.

I met Tina at a five-day Multi-Cultural Competence workshop. Tina was the one who skillfully voiced the racial and gender bias that was occurring in the room, most challengingly by the famous founder and facilitator of the workshop. 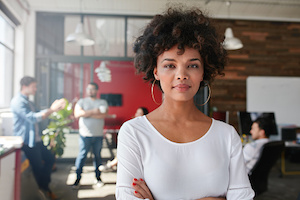 As one of the most courageous women I know, she’s a perfect example of how easy it is for any of us to betray important values in challenging situations at work. And paradoxically (but not uncommonly), it was Tina’s drive and aspiration to be of service that ended up undermining her.

Tina had pursued that university position because of her deep desire to help students, especially those of color, navigate a new, unfamiliar, and often predominantly white environment.

With one student in particular, Tina says, “I was so excited to help her have a better experience than I and so many other students of color have had.”

Tina was asked by the student to attend an important meeting to help facilitate and provide moral support but was ultimately blocked by…her boss, who said, “It’s not your place in the hierarchy to address this. You have to realize how we do things here if you want to proceed to a permanent administrative role.” (Achieving that status would make Tina the first woman of color in that role, and position her to have much greater influence.)

Tina went along to get along. “I know I didn’t advocate for that student the way I should have. I was worried my actions would negatively impact my ability to move up—I wanted to be seen by others as a ‘worthy’ applicant.”

Sound familiar? Sadly, it happens all the time. And if you have a pulse, something like this has happened to you, and could happen again. But it’s possible to reframe the situation so that we’re less likely to “go along to get along,” and more likely to take courageous action. Below are three ways to stay true to your values and find the courage to stand up for them.

That’s the bad news—but there’s good news, too. According to Ann Tenbrunsel, professor of business administration at Notre Dame and research director of the Institute for Ethical Business Worldwide, “Our research shows that if you frame your decision to include values, you’re much more likely to act in accordance with them.”

In other words, ask yourself, “What’s the ethical thing to do here?” In Tenbrunsel’s study, participants were more likely to lie and cheat when they framed their decision as a business choice, rather than an ethical problem. Tenbrunsel’s research suggests that an ethical framing greatly increases the probability we’ll act within our values.

Although Tina wasn’t acting “unethically,” she does say that she lost sight of her core values and her goal of helping students. Tenbrunsel points out that this is also common.  “When we move to ‘operationalize’ our values and goals, we trigger concrete thinking, which has less access to our values than does more abstract thinking,” she says.  For example, when Tina focused on “how” (operational/concrete thinking) to follow the rules and cultural norms to win the position, she lost sight of “why” (values/abstract thinking) she was ultimately going after the role.

Sixty-plus years of social psychology show us that we all have areas of strength and vulnerability when it comes to acting on our values in social settings, like work. Some of us will readily speak up for a colleague who’s being mistreated, but not for ourselves. Others can more easily stand up to unjust or unwise authority, but hide mistakes from people whom we deeply respect. Recognizing these vulnerabilities as they arise can be the key to making better choices.

2. Listen to your body

Often ignoring our values comes at a cost, initially a physical one. “Whenever I go against my own soul, it has physical effects. I literally get sick,” says Tina.

Our physical sensations are often our first alarm, and can be our guide.

Tina says of that moment when she agreed to go along with her boss, “It shook me to the core. I felt like a sellout.”

Not acting on or contradicting our values can trigger shame. Although we may feel the urge to run from them, emotions like guilt and shame can be a useful signal that we are not acting in line with the things we care most about. This signal can help us to consider and adjust our behavior if necessary.

To listen to shame, we need to use it as a compass rather than a straitjacket. We want to avoid the impulse to label ourselves as “cowards” or “sellouts,” which only makes us feel more shameful and unable to act.

“The trick is to see difficult thoughts and emotions as information, something to step back from and be curious about, rather than something to run from. From this point, it is easier to be compassionate to ourselves and use our values to courageously navigate forwards,” says Rob Archer, Ph.D., who uses applied psychology to help organizations improve well-being in the workplace.

One way to do this is to talk to ourselves as we would a dear friend: “I get this is hard; and I see that it matters a lot to you to speak up to help students,” Tina might have told herself.

Eventually, Tina was able to use her negative feelings about the incident to spur her onward. As she says, “I took a step back and saw that I lost something. It was the start of a real effort to be reflective, intentional, and courageous.”

3. Use the power of commitment

Once she had set her internal compass, Tina could turn her full energy to figuring out a way forward: “I made a commitment: Going forward I will be bold to support the values that truly matter to me.”

When we commit, we can get creative. We don’t have to waste time trying to rationalize why we don’t have to speak up. We use all our energy on “how,” not “if.”

At my company, Courageous Leadership, LLC, we always counsel: Practice every courageous conversation you plan on having to get a better sense of what you want to say, what’s wise to cover in this first exchange, and who is a likely ally who can help provide leverage to change a systemic issue.

Commitments also help us stick with it when it’s hard. It’s rarely just one courageous conversation; our work environment may require repeated and long-term courage. And while there can be consequences, there are usually positive effects, too—especially in terms of learning and building our sense of courage and resilience.