In 2007, Wesley Autrey, a 50-year-old construction worker and Navy veteran, jumped down onto a subway platform into the path of an oncoming train to save a man who has fallen onto the tracks. Last week, bookkeeper Antoinette Tuff talked down an armed gunman at the elementary school where she works and convinced him to surrender to authorities. Five days ago, ten-year-old Antoine Burks rushed into a burning house to save his little sister.

Reports of inspiring acts of heroism like these capture our imagination. We wonder how these seemingly ordinary people had the courage to act in the face of danger, questioning whether we would be able to act heroically if confronted with the same situation. 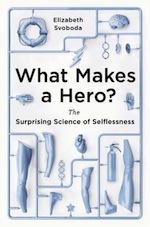 In her new book, What Makes a Hero? The Surprising Science of Selflessness, science writer Elizabeth Svoboda explores what prompts people to act altruistically and how to strengthen the likelihood of heroic action when we are called upon to do so.

While awe-inspiring heroes are to be admired and emulated, Svoboda writes, “many slow-and-steady career altruists also practice a kind of quiet heroism, one that too often goes unrecognized.” She makes the case that, whether we are talk about heroic or altruistic acts, “all of these acts arise from the same basic motivation—enriching someone else’s life at personal expense, whether small or large—so the differences between them are, in part, a matter of degree.”

In other words, everyday altruism is a precursor to heroism. If we build up our “altruism muscle,” she argues, we are more likely to act heroically when the time comes.

Luckily, we all have the capacity to act in altruistic ways—it’s built into our biology. According to researchers, helping behaviors are instinctual in the animal world and probably evolved because the willingness to self-sacrifice helps with natural selection at the group level. In human societies, our tendency to help out one another has helped foster cooperative communities that fare well and can survive in a surprising number of environments.

In addition, neuroscientists have shown that our brains contain structures and pathways designed to reward us with positive feelings whenever we act in altruistic and compassionate ways. This system, says Svoboda, encourages more altruistic behavior by rewarding us for good deeds.

Yet it’s also clear that we don’t always come through to help others—think of the homeless man you pass on the street or the stalled car on the highway you zip right past. There must be things that get in the way of acting more heroically all the time.

Sometimes, writes Svoboda, people tune out the suffering of others because it evokes painful emotions in themselves. The desire to avoid sadness, anger, and frustration can make us want to avoid those who are suffering, which means we are less likely to feel compassion and want to help. Svoboda suggests mindfulness training—learning to focus on our moment-to-moment experiences and emotions without judgment—as one way to cultivate acceptance of negative emotions. If we learn to stay with our negative emotions rather than push them away, it can open the path to engaging more with someone who is suffering and offering to help.

Another hindrance to altruism, she writes, is that people are less likely to step in when a problem seems overwhelming or involves many victims—such as world hunger or poverty.  In one study recounted in the book, researchers read a story to participants about victims of violence in Darfur and measured how compassionate the participants felt when exposed to pictures of the victims. Participants who saw a picture of one child felt more compassion and were more willing to donate to a charity for victims than those who saw pictures of eight children. The take home message is that altruism is more likely when we focus on the needs of one person in front of us that many people far away.

Knowing what gets in the way of altruism may help us to avoid these pitfalls in the future. For example, Svoboda describes Philip Zimbardo’s Heroic Imagination Project—a program devoted to developing more heroic action—where teachers educate high school students about the bystander effect (the tendency to avoid taking heroic action in a group if other group members don’t) and conformity theory (the tendency to conform to expected behavior). The hope is that teaching students about these tendencies can open their eyes to subconscious influences on their behavior and allow them to make better choices when faced with challenging situations requiring heroism, such as bullying at school.

Perhaps the most promising course of action, though, is to just go out and start giving something—however small—to those in your community. Giving could involve listening to a friend in need, providing food to a homeless person, or volunteering at your local school. According to Svoboda, research has shown that when people give in small ways—even when that giving is coerced—reward centers of their brains will light up, strengthening the altruism circuit and making us to more likely act heroically when faced with difficult decisions.

So take note of your biases and don’t let them stop you from a program of giving. After all, we could all use more Antoinette Tuffs in the world.