In a world that too frequently feels cruel and hostile, with so many engaged in a dog-eat-dog struggle, why do certain people perform heroic acts of altruism and compassion while others do nothing—or even contribute to the misery of their fellow man? In particular, how can we answer the questions posed by Paul Ekman in his Greater Good Science Center presentation: Where does this kind of heroic compassion come from? Is it something that can be taught?

These are the kind of questions I have explored over 20 years of research. In that time, I have studied different types of altruists, from philanthropists to rescuers of Jews during the Holocaust to recipients of the Carnegie Medal, awarded to civilians who perform exceptional acts of heroism. I have conducted both surveys and in-depth interviews with these people, asking them a wide variety of questions but mostly focusing on what made them do what they did. I then analyzed these interviews using a method of interpretation similar to the kind of psychological analysis a therapist does when listening to a patient talk.

I found that what drove such altruists is what I call the “altruistic perspective,” a particular way of looking at the world in which altruists see themselves as bound to others through their common humanity. Where the rest of us see a stranger, the altruist sees a fellow human being. This worldview is such a part of the altruist’s basic identity that it makes some actions—turning away from those in need, for example—simply unimaginable. It is analogous to the way we consider our options at a restaurant: It’s tough to get sushi at an Italian bistro; it’s just not on the menu. So it is with the altruistic perspective: It presents some of us with moral choices that differ significantly from the options available to others. Altruists simply have a different cognitive menu. 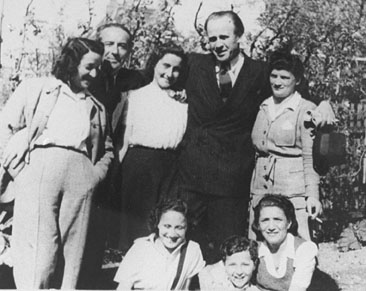 Oskar Schindler (back row, second from right) with people he rescued from the Holocaust, one year after the end of World War II. © United States Holocaust Memorial Museum Photo Archives

This is not to say that other people lack morals. Indeed, research suggests that most of us innately posses what I call an “ethical perspective.” For example, scientific evidence suggests we have an innate preference for fairness. We are offended and upset by acts that violate this sense. Research has found that people feel disgust for certain behaviors, such as incest, just as they’re disgusted by objects like rotten food. What’s more, experiments with dogs suggest this may be part of our animal nature.

In one experiment, for instance, researchers asked dogs to shake hands. When the dogs did so, they were given a pat on the head and a “Good dog.” The dogs wagged their tails and seemed pleased. The first group of dogs was then sent to the other side of the room and a second group was brought in. The experiment was repeated—except that the second group of dogs got a pat on the head, a “Good dog,” and a treat to eat. The first group of dogs observed this. When the experiment was then repeated with the first group, they refused to shake hands, suggesting they were not willing to perform in a situation in which they were given second-class treatment. It was not fair, and it offended them.

But why do some of us build on this moral foundation more than others? If we think of this universal (or nearly universal) ethical perspective as a yardstick, then it seems as if the altruists’ cognitive framework corresponds to the last part of the yardstick—inches 30 to 36, perhaps—while others fall at different points on the stick. What sets the altruists apart?

To answer that question, I returned to my World War II rescuers and compared them with people who were bystanders or even Nazi supporters during the war. I found clear differences in worldview, self-image, and the way the different groups classified themselves in relation to others.

Finally and ironically, Nazis have a victim mentality, seeing themselves as members of a group that had been treated badly and threatened by Jews, Social Democrats, homosexuals, etc. Their sense of agency was strong but only insofar as they felt connected with the winds of history. Nazis were the strongest communitarians, feeling close ties for members of their own self-defined group but having little (if any regard) for those who fell outside their group.

Based on these findings, I conclude that everyone does have an innate ethical perspective, but the details are guided by immediate factors, such as the individual’s background and life situation, much as an innate propensity for language is guided by the specific linguistic context of the country and society into which one is born and raised.

This brings me to the second question Paul Ekman poses: Can heroic compassion be taught? Of course, it would be impossible to conduct controlled research that provides a definitive answer to this question because that would require simulating the kind of situation that World War II rescuers faced. But I have studied whether developing empathy for another person encourages more humane treatment of them.

For several years I taught a class that used an interview technique meant to foster empathy for “the other,” in the hope that it would foster more tolerant attitudes and compassionate treatment of others. Students in the class were given verbal and written tests to gauge their attitudes toward diverse groups; they also took Implicit Association Tests (IAT), designed to measure a person’s underlying, subconscious prejudice. (For example, students view photographs of old and young people on a computer, and are told to press a button labeling the young people as “good” and another labeling the elderly as “bad.” Then they take the test again, reversing the labels. Because most people in Western society view youth more positively than old age, they respond more quickly and accurately when they have to label the photos of young people as the “good” ones.)

In the class, we discussed many types of difference—race, ethnicity, religion—but zeroed in on age, and asked the students to conduct a detailed interview with an elderly person, preferably one in their own family. Since our intervention focused on the elderly, we expected a shift in attitudes toward old people.

After their interviews, we again measured the students’ attitudes toward other groups. We compared the results with those of a control group, which hadn’t interviewed an elderly person.

But those IAT measurements did offer a pleasant surprise: They revealed a strong and significant shift in attitudes toward women with careers. We hadn’t expected to see changes toward this group at all. The fact that both the professor and the teaching assistant were female, in an intense and well-received seminar setting where students had extensive faculty involvement, might have inadvertently served to foster empathy toward members of a group—in this case, career women—that was heretofore unknown to most students, many of whose mothers were immigrants who stayed at home or had jobs with low status. If so, this would suggest that our initial hypothesis is correct: Empathic involvement with a member of a group that is discriminated against can shift attitudes toward such group members. But the involvement needs to be more extensive than simply a short (one-to-three-hour) interview.

While this is but one small experiment, even our tentative, initial results shed light on the possible factors that may influence a positive change in attitudes toward a group initially judged to be “different,” and it represent an important step toward developing classroom-based programs that promote ethics. Whether this kind of limited intervention will foster the kind of heroic altruism found in World War II rescuers is another issue, but the initial results suggest empathizing with another does encourage more humane treatment of that person’s group.

Certainly, the rescuers I have interviewed demonstrated tremendous empathy toward all groups—Jews, Allied airmen, political resistors to the Nazis, even Nazis themselves—so their ethical treatment of others seems related to this sense of connection fostered by empathy. This connection is also supported by research by Samuel and Pearl Oliner of Humboldt State University, who questioned people who rescued Jews during the Holocaust and found that empathy was key to their motivations, as well as by many experimental studies by psychologist Daniel Batson.

Without a doubt, the importance of empathy in our treatment of others seems worthy of further investigation. I encourage other scholars to pursue these findings in future work as we attempt to understand the roots of the “altruistic perspective”—both for our daily lives and for those events that require acts of moral courage.

Many years ago, for my Master’s thesis, I researched altruism by looking at the winners of the Carnegie Medal for Heroism.  I had a small sample, only about 30 people, but had some interesting results.  Contrary to what I had expected based on demographics in the US, Methodists outnumbered all other religions.  Following up on this, I discovered that Methodists are asked to sign a “social contract” encouraging them to help others.  The other interesting finding was also counter-intuitive.  When responding to the question about birth order, more Carnegie recipients identified themselves as youngest children, rather than oldest which is what I had hypothesized.  Looking further, I hypothesized that this group of youngest children were “well loved” thereby instilling in them a sense of efficacy.  I would be curious to know if you have looked at either birth order or religion in your research on altruism.