Jewish-Israelis and Palestinian-Israelis have spent decades in conflict over disputed territories. The mutual distrust and skepticism have built to a point that the two groups struggle to work cooperatively on solving their issues.

But a Stanford-led research team of psychologists found that teaching Jewish-Israeli and Palestinian-Israeli teenagers that groups are generally capable of change—without ever mentioning a specific adversary—can significantly improve their ability to cooperate. 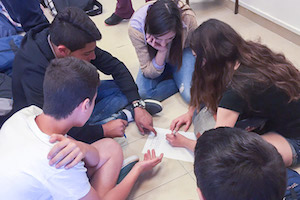 Study participants work together on an activity.

Amit Goldenberg, a graduate student working with psychology professors Carol Dweck and James Gross, was lead author on the paper published in Social Psychological and Personality Science, along with co-authors Kinneret Endevelt, Eran Halperin, and Shira Ran of the Interdisciplinary Center (IDC) in Herzliya, Israel.

“We found that people who believe societies and individuals are capable of change cooperate much better with each other,” Goldenberg said.

Several years ago, Dweck said, a former postdoctoral fellow, Eran Halperin, suggested that her lab’s ideas and research should be examined in the context of the Israeli-Palestinian conflict. So Halperin and his team launched a series of research projects. Halperin is now a professor at IDC in Herzliya.

One of their earlier studies showed that both Israelis and Palestinians expressed more favorable attitudes toward each other and were willing to compromise after they were presented with a news article arguing that groups could change.

“When you think people have fixed traits your job is to just figure them out and go from there,” Dweck said. “If you think people can develop and change, you don’t tend to make blanket judgments.”

Each school’s students were divided into two groups. Over the course of three sessions, one group was taught about people’s ability to change while the other group learned about ways of coping with stress. In the fourth session, the Jewish and Palestinian-Israeli students met and were separated into mixed teams of four to six participants. The groups then completed several tasks, which were used to measure the degree of their cooperation. In one of the tasks, the students used spaghetti, marshmallows, and tape to build the tallest tower they could in 10 minutes.

The study’s results showed that students who were taught the ideas about change built towers that were 59 percent higher and had more positive emotions toward each other in comparison to the groups in the control condition.

“We expected to see some change, but not such big changes,” Goldenberg said. “It’s much easier to see changes in people’s attitudes, but to actually see that these people are cooperating better is remarkable.”

Goldenberg and his colleagues said the content of the workshops used in the study could potentially produce positive outcomes if it were implemented in Israeli and Palestinian schools.

But more studies should be done to solidify the results of their research. Researchers point out that future experiments should include another group of students who aren’t taught anything before meeting, in order to see the full benefit of explaining people’s ability to change. Halperin, Goldenberg, and their team are currently conducting studies in adults, which they say is important in order to show how long the change in attitudes might last.

In the meantime, the team is excited about the implications of the latest study. “The Israeli-Palestinian conflict affects millions of lives every day,” Goldenberg said. “Any contribution you can make to this problem is progress.”