Today’s students are the most racially tolerant generation our nation has ever seen. According to recent studies, they are more likely to have friends, or to date, across racial and ethnic lines than the generations who came before them. On the whole, they believe racism is wrong. 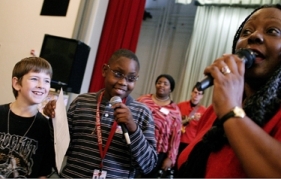 But we still have a long way to go. According to federal statistics, one in four students report being targets of racial or ethnic bias in a typical school year; one in 10 say they’ve been called an offensive name at school; and, in urban schools, nearly 40 percent of students report seeing bigoted graffiti on campus. Disturbingly, schools are the third most common location for hate crimes.

So what can educators and schools do to help elevate levels of racial tolerance among students?

Since 1991, the Teaching Tolerance project of the Southern Poverty Law Center has served as a clearinghouse for promising practices and ideas. Through our semi-annual magazine, curriculum tools, grant program, and website, we support more than 500,000 educators each year.

Last year, Teaching Tolerance completed a two-year assessment of its programming. Our findings indicate that schools committed to reducing racial prejudice should focus their efforts in four areas.

The use of multicultural materials is likely the most popular anti-bias intervention in schools. In a survey we conducted with the National Education Association and UCLA’s Civil Rights Project in 2005, the vast majority of educators reported that they use such materials in their classrooms.

Although multicultural materials offer great promise, particularly because they can be used in both segregated and integrated schools, researchers are somewhat split on their effectiveness.

In 2000, psychologists Frances Aboud and Sheri Levy examined findings from existing studies of multicultural education programs, dividing them into two groups: multicultural interventions (those that teach students about diverse groups) and anti-racist/anti-bias interventions (those that specifically teach students about social problems, such as racism and xenophobia). Their analysis found that anti-racist/anti-bias interventions had a greater effect on reducing prejudice.

In practice, this means educators shouldn’t simply teach about “great African Americans in history;” they must also teach about American racism and segregation, and its effects on African-American communities, past and present.

Character education programs generally intend to help children develop moral decision-making skills; rarely are they designed with anti-bias aims in mind. However, these programs are relevant to prejudice reduction in an important way: Longitudinal studies have shown that people with higher levels of moral development have lower levels of racial prejudice.

For anti-bias effects to take shape, however, character education programs must do more than tell students about a list of values, such as “honesty” and “equality,” or general principles, such as “equality is important.” Instead, we must prompt students to delve deeply into the nuances of these values and principles (e.g., “Does treating people equally mean treating everyone the same?”).

To foster this kind of inquiry, several programs run structured dialogues that encourage students in high school and college to examine their own values, and the values of others. Often designed to promote cross-group understanding, such programs can produce powerful results. For example, an evaluation of the University of Michigan’s dialogue-centered Program on Intergroup Relations showed that the program helped white students develop a greater sense of shared values and interests with people of color, while students of color perceived less racial divisiveness and reported more positive interactions with white students. These effects were sustained over three years.

For decades, researchers have studied social contact theory, which asserts that when people interact across group lines, in properly designed activities, their prejudiced beliefs and behaviors will fall away. A 2000 analysis, conducted by researchers Thomas Pettigrew and Linda Tropp, reviewing 203 individual studies and 90,000 subjects, confirmed the power of cross-group contact: In 94 percent of cases, face-to-face interaction between group members led to a reduction in prejudice.

Two factors currently make it hard for schools to adopt social contact strategies. First, as researchers at UCLA’s Civil Rights Project have documented, school choice programs (e.g., vouchers), persistent residential segregation, and weakening legal mandates for integration are fueling the resegregation of American schools. As the 21st century gets underway, African-American students are more likely to attend segregated schools than they were in 1968. Segregated schooling also is becoming the norm for Latino students—and the same goes for white children, who are the most racially isolated students in the nation. A decision by the U.S. Supreme Court last summer, which ruled that school districts cannot integrate public schools by assigning students to particular schools on the basis of race, leaves districts with few options to pursue purposeful integration, and the re-segregation of our schools is likely to escalate.

Second, the No Child Left Behind Act is placing extreme pressure on schools and teachers to “get test scores up.” This pressure often translates into hours upon hours of classroom test prep and mandated use of scripted curricula, leaving little, if any, space for the practice of cooperative learning or any other form of instruction that’s not seen as preparation for standardized tests.

Still, many schools remain diverse, and these schools should embrace programs, such as the Jigsaw Classroom and Teaching Tolerance’s “Mix It Up at Lunch Day” initiative, that create opportunities for diverse students to cross group lines and get to know each other. Teachers, too, can use what flexibility they have to implement cooperative learning strategies in their classrooms.

If educators and policy makers truly want to reduce prejudice, they must work to provide all students with equal academic opportunities in schools. As Rodolfo Mendoza-Denton makes clear in his essay “Framed!”, common practices like tracking or ability grouping can send strong, if unintended, messages to students about one group’s supposed superiority or inferiority to others. If white students predominate a school’s AP courses and students of color tend to populate its remedial classes, for example, that reality can inform students’ attitudes about race and racism in profound ways. In that case, it’s unlikely that anti-bias lesson plans can outweigh these attitudes and lived experiences.

One way we can begin to address such inequity is to better prepare teachers to work with a diverse student body. A report released this past May by Public Agenda found that, while a majority of new educators (76 percent) said teaching an ethnically diverse student body was covered by their training, only 39 percent said that training actually helped them in their classrooms. Teaching Tolerance’s research supports these findings: We’ve consistently found that, while educators care deeply about their students’ success, they often lack the tools, know-how, and support to create classroom communities that successfully serve students of color. Recognizing this need, we’ve partnered with the National Education Association, the American Association of Colleges of Teacher Preparation, and a national advisory board of renowned scholars to launch the “Teaching Diverse Students Initiative” in the Fall of 2009. The Initiative will offer the first suite of professional development tools specifically designed to help educators understand how race and ethnicity should—and should not—inform their instructional practices.

We hope that programs like this one will build on the progress our schools have made over the past few decades. To reduce prejudice even further, and to provide a quality education to all our students, we must commit ourselves to the hard, uncomfortable work of examining the ways race and ethnicity play out in our classrooms and schools. We can realize our nation’s promise of equality only through our demonstrated commitment to it—through our actions, day in and day out.

Thanks, I found this summary of what works in counter-racism interesting and potentially useful.