When Americans sit down with their families and friends on Thanksgiving, they take the time to be grateful for the food and for each other.

But in giving thanks for the good things, we may miss one of the most important benefits of gratitude: A stack of research—including some sponsored by the Greater Good Science Center—suggests that cultivating an attitude of gratitude can help us get through the trials and tribulations of daily life. 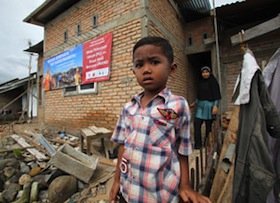 A boy stands outside his home following the devastating 2009 earthquake in Padang, Indonesia. © Josh Estey/AusAID

But is gratitude still useful in the face of truly horrible and traumatic incidents—or is it a luxury that must be discarded when disaster strikes? Two recent studies looked at the role of gratitude in mitigating post-traumatic stress disorder in the wake of violence in the Middle East and natural disaster in Asia.

“Since 2001, the South of Israel has been the target of repeated rocket and missile attacks from the Gaza strip,” write Yael Israel-Cohen and colleagues at Tel Aviv University in The Journal of Positive Psychology. For their study, the team surveyed 522 Israeli teenagers from one town that came under five-day missile attack, during which school was cancelled and the kids spent much of their time in bomb shelters. Two and a half months after the attack, the researchers measured the teens’ life satisfaction, positive and negative feelings, gratitude, and symptoms of post-traumatic stress disorder, analyzing all those factors in relation to each other.

Perhaps not surprisingly, they found that life satisfaction—that is, happiness with their school, family, and prospects—was the strongest protection against PTSD, which is revealed in symptoms like hypervigilance and no hope for the future. But gratitude proved to have a decisive role in helping the adolescents to be more satisfied with their lives, mainly because “thank you” is a form of cognitive appraisal that helped the teens see their situations in a new light.

Their study also offered “some support for gratitude’s role in ‘undoing’ negative psychological states” that might arise from trauma—meaning that an attitude of thankfulness helps heal the effects of a traumatic incident as well as preventing its worst psychological effects in the first place.

This result is echoed in another study published this year in the Journal of Positive Psychology.

July Lies, David Mellor, and Ryan Hong enlisted 505 participants from two areas in Indonesia—Padang City and Pariaman—devastated by a 2009 earthquake that killed 1,115 people and destroyed tens of thousands of homes. The researchers surveyed the survivors five months after the disaster and again at eight months, using scientific scales designed to measure resilience, physical and psychological health, post-traumatic stress symptoms—and feelings of gratitude.

Unsurprisingly, their initial analyses found that the survivors’ health improved in between the two periods, with participants experiencing fewer post-traumatic stress symptoms. But, interestingly, they also found that levels of gratefulness seemed to have no impact on PTSD symptoms at five months. In fact, the positive impact of gratefulness didn’t show up until eight months—suggesting that gratitude needs time to help us heal from disaster. At the two different periods, the participants’ gratitude levels, as measured by the study’s instrument, stayed steady; but the impact of the gratitude seemed to increase.

As the researchers note, their study contained an unusual number of limitations. For example, they couldn’t measure the participants’ personality and gratefulness before the disaster, and so lacked a baseline of comparison. The time scale also limited their conclusions: most of the healing would have happened in the five months before they first surveyed the participants.

Despite these limitations, however, the study did provide some nuanced insights into the relationship between gratitude and resilience—particularly when considered in light of the Israeli study. Both found that gratitude seems to help repair the psychological damage inflicted by disaster.

But there is a key difference between the two studies. Rather than acting as a vaccine that inoculates individuals against psychological damage—as the Israeli study suggests—gratitude may be more like an antiseptic. “In other words,” write the Indonesian researchers, “the role of gratitude may be more of fostering post-traumatic positive growth rather than to shield people from psychological distress in the immediate aftermath of disasters.”

Why? Both studies suggest that the answer may lie in gratitude’s ability to make us take a second look at our lives, turning our attention from the bad things to the good—a cognitive process that needs time to unfold. This implies that giving thanks on the fourth Thursday of November won’t just help us appreciate food and family. It could also help us heal from the the traumas of our lives, both small and large.