The media plays a huge part in shaping our understanding of the world, including how people feel about themselves and others. Coverage of immigration is no different. And as one of the most highly contentious political issues of our time, immigration rhetoric in the media has led to the stigmatization and demonization of some groups. 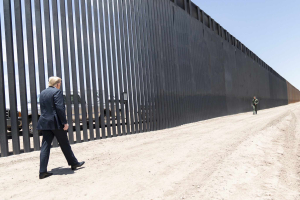 In recent years, Latinos have been targeted by anti-immigration sentiments. Former President Trump led the charge with incendiary immigration rhetoric, using words like “criminals,” “animals,” and “invaders” throughout his 2016 campaign⁠—which seemed to drive anti-Latino words and actions in subsequent years. How did this rhetoric affect Latino well-being?

To begin answering that question, a recent study in the Psi Chi Journal of Psychological Research examined the immediate impact of exposure to anti-immigration sentiments on the psychological well-being of Latino young adults.

Researchers gathered 340 participants who were from at least one of four groups:  immigrants from Latin America, first-generation Latino Americans, second-generation and up Latino Americans, and non-immigrant white Americans. Some of them watched political commercials that featured anti-immigration sentiment, while the control group watched an informational video on multivitamin use. After watching their assigned video, participants completed questionnaires that gauged acute stress, mood, and motivation to volunteer in the community or become politically active.

Indeed, they found increases in negative emotions and stress levels among Latinos who watched anti-immigration videos, especially recent immigrants and first-generation Latinos⁠—and those who experienced the most negative impact were also the most motivated to take action of some kind.

These results align with another 2015 study that found Mexican Americans demonstrated elevated feelings of anger and shame after seeing negative film portrayals of their ethnic group.

“There is an effect,” says Daisy Jauregui, lead researcher of the new study. “Some of these portrayals that are much more opinion-based, and trying to say all Latinx are criminals and things like that. Those are things that sting, evoke anger, and evoke all these negative emotions.”

However, hateful or biased rhetoric didn’t just hurt immigrants and children of immigrants. The study also found that white participants experienced a negative physiological response after watching the immigration clips, even though all the people speaking negatively of immigrants in the clips were white Americans. This finding suggests there are even subtle emotional costs for the people who identify with the perpetrators, says Jauregui.

That might seem surprising, but Jauregui was most surprised to discover that Latinos who watched the anti-immigration videos felt less ethnic identification afterward⁠—in other words, a sense of belonging to a particular group. So, anti-immigrant rhetoric doesn’t just trigger stress in Latinos⁠—it might drive them away from their own culture.

“If this was the immediate effect, imagine what is happening in the long run,” Jauregui says.

On the other hand, say the study authors, positive representation has been shown to foster resilience.

More research needs to be done to examine the long-term impacts of these negative portrayals, says Jauregui⁠—and she points out that it’s just one more source of stress in the life of Latino communities. But, whatever the case, she believes there’s enough evidence to encourage more action on Latino mental health.