If having a conversation about immigration with people in your life feels hard, frustrating, or scary, you’re not alone. 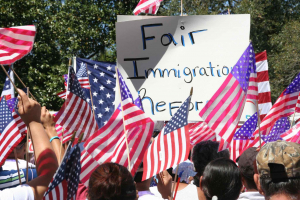 In recent years, the topic has become increasingly contentious and difficult. You may find that the conversation quickly transforms into a pitched debate, with each side digging in and feelings getting hurt.

After going through this experience once or twice, it’s easy to imagine why people avoid the topic altogether. Yet, as a society, we lose when a charged topic like immigration becomes off-limits or taboo and people stop exploring—and bridging—their divergent opinions. The debate drags on without a solution, with grave consequences for immigrants, their families, and the many Americans whose lives are intermingled with theirs through work and community life. As a result, it’s critically important for us to find new ways to connect and engage on the issue.

Is that possible? We can’t promise that each individual conversation will be productive, but here are five suggestions for making that outcome more likely.

We often hear about the vulnerability of people who fled their home countries, which we might call the “struggle” narrative. We might also learn about the value of educated individuals to our high-tech and medical industries, which is a narrative of exceptionalism.

The trouble with both the struggle and exceptionalism narratives is that they can trigger competitiveness in the minds of many. This is because people often carry the false belief that if immigrants get more of something (safety, jobs, rights, education, etc.), then the American-born would get less of that same thing. If you believe that resources are finite and that any piece of the pie that goes to an immigrant means less for you, then you might feel threatened by immigrants.

To correct zero-sum thinking, we need an abundance mindset that allows us to explore how good immigration policies can benefit everyone living in America. What would an immigration system look like that created a win-win rather than a win-lose scenario in people’s minds? Can we tell stories and have discussions that explore shared struggles, dreams, and aspirations of everyone who calls America home, and avoid some of the pitfalls of immigrant struggle/exceptionalism narratives?

2. Tread lightly around the sacred

“Research shows that when perceived threat and social identity become involved, our policy stances can become sacralized, transforming into absolutist, moralized, non-negotiable values,” write Nichole Argo and Kate Jassin in a recent report from the American Immigration Council. “These sacred values do not operate like regular values, which can be reevaluated if one is willing to make trade-offs.”

As a result, significant numbers of Americans hold their immigration positions so tightly that they wouldn’t abandon them for any amount of money. The issue is so dear to them, in fact, that trying to negotiate around it could backfire. For some, ending the practice of family separation is sacred, while for others it’s the idea of securing a border wall. Both groups are unlikely to be persuaded otherwise.

What’s the solution to such an impasse? Knowing how sacred immigration issues have become for different groups of people helps us understand why conversations on the topic are so hard and sometimes explosive. Thus, when discussing immigration with someone, it’s important to listen carefully and try to understand what they deem sacred—and why.

For example, we can learn what is behind positions like the need for a border wall. Is it safety or security? How do we satisfy those needs? Is that a bridge to helping them understand the desire of so many to migrate to the U.S. seeking a safe place to live?  Perhaps we can connect people across these fundamental feelings and concerns. After all, who doesn’t want to feel safe?

Through this process, you might find where you have the most agreement and common ground—and from there, you can build the trust necessary for deeper and more specific policy discussions.

3. Tell binding, values-based, and emotional stories rather than cite facts

The Nobel prize–winning behavioral economist Daniel Kahneman says that people are not persuaded by numbers but by stories. Yet we often start with data to make the case for immigration. We cite economic data, crime data, and demographic data. We bring facts to what is a highly emotional issue for many.

This approach usually fails because the lived experiences, prior knowledge, and in-group norms (peer pressure) informing an individual’s views on immigration won’t be undone by a data set.

Rather, sharing stories of your own lived experience with the issue can produce more powerful shifts. Stories that highlight the common identities that foreign- and U.S.-born people share as parents, sports fans, foodies, and coworkers help bind people as they learn about what they have in common with each other rather than what they don’t.

Once these commonalities have surfaced, people are better able to process the facts. That’s why facts should follow, not lead, in an immigration conversation.

4. Consider who the best messengers are

There is a growing body of evidence that shows that Americans are increasingly less trusting of national leaders and more trusting of people closest to them at the community level. In fact, people are most likely to believe what their peers and family members believe. For this reason, “in-group” messengers are often the best to reach people on any topic, but particularly the hard ones.

For example, when a fellow parent, parishioner, or soccer mom shares an opinion or story, we process it differently than when we hear the opinion of a stranger or out-group member. If an in-group member tells us a personal story about an immigrant family they were close to, that might shape our thinking about interactions with immigrants. Members of our own in-groups hold more credibility and they shape our behavior, which is why in-group members can be powerful influencers of thoughts and behaviors.

In the event that a particular group is leaning anti-immigrant in their thinking and behavior, in-group moderates (people with more moderate thinking within the group) can help shift the conversation by showing that opinion is not uniform within an in-group. It’s helpful to lift up those people who share your audience’s values or identities to address immigration issues—and it’s important that we resist attempting to enlist people who don’t have the right level of credibility with our intended audience.

5. Help shift the norms in your local community

Social norms are what we perceive to be a typical or desirable behavior. While national norms exert influence, of course, there is evidence that localities can carve out their own distinct norms.

By telling stories, engaging in discussions, and acting in ways that exemplify your values and hopes for how your community should treat your foreign-born neighbors (as well as your U.S.-born neighbors), you shape the social norms in your community, which in turn may shift the views of some of its members—or influence their public-facing behavior at the very least.

Beyond the level of one-on-one conversation, it’s important to connect neighbors, both immigrant and American-born, and bring them into community with one another. Find the safe and welcoming spaces where those interactions would be the most organic and most likely to recur. They could be houses of worship, worksites, playgrounds, sports leagues, volunteer projects, food programs, job training, schools, and universities where people can come together for themselves and for the good of their community. We can build bridges and relationships through activities that leave politics behind and help us to find common ground.

While these tips for how to have productive conversations seem pretty simple, we know it’s hard to navigate contentious topics in a polarized environment. The point is to try new approaches that are more likely to get us there than what we’re doing now.

We know it’s possible. In 2018, the Kettering Foundation hosted 86 conversations about immigration in local communities across the country. The forums brought people together who agreed, disagreed, changed their minds, and challenged one another’s thinking on immigration. They were able to have respectful, nuanced conversations on a complex and emotional area of public policy.

If we can reimagine our conversations on immigration, we’ll create a new way forward on the immigration question, but we’ll also strengthen our civic bonds, increase social trust, and take one more step toward building the pluralistic democracy that we want to live in.