Everything you think you know about immigrant families is probably wrong.

That’s one of the conclusions I took away from the annual meeting of the Council on Contemporary Families, which convenes scholars and writers from around North America to discuss new scientific findings about the family. 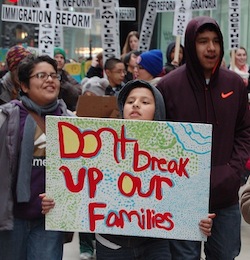 This year’s conference at the University of Miami focused on immigrant families, and I heard from researchers whose discoveries undercut much of the “conventional wisdom” around immigration. For example, so-called “illegals” are remarkably law-abiding, in part because they live in fear of deportation and so won’t do anything that might entangle themselves with law enforcement. But, as I describe below, the undocumented condition—and the constant threat of deportation that comes with it—can have profoundly adverse psychological affects on children.

You may not be an immigrant, but the implications of this research go well beyond immigrant families and echo other new findings about the family. Here are three cutting-edge insights that should concern all Americans—and inform public policy debates.

During the past few years we’ve seen more and more studies showing that adherence to strict ideas about what a man should do and what a woman should do interfere with the ability to thrive in the twenty-first century. This insight emerges in many different, sometimes unexpected, domains—and in Miami, it turned up in research into immigrant families.

For example, Vanderbilt University sociologist Pallavi Banerjee discussed her study of 43 immigrant Indian couples in which one spouse has permission to work in the United States and the other does not. This kind of visa is designed to support “stable” and “traditional” families, but it also creates situations of dependency and social invisibility for the can’t-work spouse—which has a psychologically devastating effect on both sexes, but especially on men who have been conditioned to see themselves as breadwinners.

“I am a loser, loser, loser,” said one husband, “for coming as a dependent on a woman and now I am the bad one. I took to drinking and smoking, what else could I do? When men are unhappy they drink because we can’t cry but then we drink and we cry inside.”

But Banerjee’s research also revealed the benefits of creatively adapting gender roles to current economic conditions. “As a man I needed to make sure my family is okay and my wife was getting this opportunity to help our family and for that I would have to sacrifice a little and I was ready for that,” said another husband.

Some of the men were able to derive satisfaction from their caregiver roles at home. “My children really love me,” said one. “If they need anything or if they have to share anything, the first person they run to is me, not their mother. It makes me feel important.” The same was true for breadwinning women: If they could see themselves as a success in that role (instead of failures as caregivers), then they seemed happier.

In a time when women’s workforce participation and economic power have been steadily rising, these are lessons that all men and women should take to heart! Note that none of this implies that gender differences must disappear; the findings only imply that the twenty-first-century economy demands a certain flexibility and tolerance in our gender attitudes.

“Intervention” is the somewhat cryptic term scholars use to refer to programs designed to produce some change in behavior. In Miami, I heard researchers present rigorous scientific evaluations of programs designed to reduce domestic and dating violence, manage addiction, increase father involvement, and spread safe sex practices, all within immigrant populations.

One winning formula emerged: These programs work when they attempt to involve all family members as well as peers, in a culturally sensitive and community-based way.

For example, University of Miami nursing professor Rosa Gonzalez-Guarda’s Proyecto JOVEN succeeded in limiting Latino teen dating violence by developing its approach with schools and the community, and involving both parents and peers in the process.

Julia Perilla of Georgia State University described a domestic violence intervention for Latinos that involved both spouses—an approach that horrified native-born domestic violence advocates. But, said Perilla in her presentation, “we listened to the women and they kept saying that the program needed to involve their husbands, too.” She elaborated on this perspective in an email to me, which serves as a useful case study for inclusive, community-driven intervention:

Basically, the fact that Latinas (and, we suspect, women from many different parts of the world) remain in relationships in which there has been violence is due to a number of reasons. Of specific importance to the women with whom we work, first-generation Latina immigrants from Mexico (approx. 79%) and other parts of Central and South America and the Caribbean, the centrality of family, the importance of their roles as caretakers of the family, their immigration status, their prior experience in their home countries, their level of income, among many other of the intersectionalities of which I spoke, make it difficult for them to decide to leave their partner.

In addition, my experience of over 17 years working with men who have used violence against their family is that, as I also mentioned, overwhelmingly they are not JUST “batterers,” or “violent men.” As we work with the men over the weeks and months we begin to see positive characteristics that give us clues as to why their partners are willing to continue living with them. I want to emphasize that this is NOT true for ALL men with whom we work. There are men who are not interested in changing their behavior, do not see anything wrong with the violence they perpetrated, blame their partner or their children for his behavior, and are actually much more capable of using what they learn in the program to “fine-tune” their violent behaviors.

A similar result emerged from a presentation by UC Berkeley’s Philip and Carolyn Cowan about their program for supporting father involvement among low-income Latino immigrants—which they found needed to involve both spouses in order to be effective, as opposed to just working with the fathers. The Cowans’ most concrete and provocative finding is that a more stable, happier relationship between immigrant parents led to higher incomes—an average of $8,000 more per year.

This was one of the strongest, most urgent messages of the research presented in Miami.

In her keynote, UCLA psychologist Carola Suárez-Orozco described how many “immigrant” families actually contain mixed legal statuses. They are undocumented children and adolescents, but also legal and citizen children of undocumented parents—and many exist in a gray area with temporary status or some kind of documentation in process. About 5.5 million children live in mixed status homes, and an estimated one million are themselves undocumented. In 2010 (the most recent year statistics are available), an estimated 193,621 children had some experience with deportation.

Children in such situations grow up with secrecy and social invisibility. Their parents cannot travel, work in most jobs, apply for many government services, or legally drive a car, among other limitations—and this is a legacy that extends to their children.

University of Texas psychologist Luis H. Zayas presented a series of case studies of children growing up “in the shadows” of undocumented status. One of his patients, “Virginia,” was six years old—and her father was facing removal to Mexico. Zayas found that life in the shadows had stunted her verbal development; she had come to fear that speaking up at school would inadvertently reveal something that would lead to her parents’ deportation, and she chose to remain silent instead. She did not speak in school for over 15 months, and the result, wrote Zayas in his evaluation, was “[pre-school] verbal production.” Virginia “occasionally stays in corner of the classroom and curls into a fetal position.”

Suárez-Orozco provided more of a empirical perspective on psychological issues faced by children in mixed status home, including:

Both Zayas and Suárez-Orozco also described negative health, cognitive, educational, social-emotional, and economic outcomes. And yet even here, the researchers were able to identify immigrants who thrived in adversity. Zayas told the story of “Miguel,” a 14 year old raised by a single father who was facing deportation. As Zayas wrote in his evaluation, “This is a remarkably well-adjusted young man…bright, engaging, respectful.”

The recipe for resilience did not seem very different from any other kind of family: love and stability in the home and a narrative that helped families see themselves as resilient.

But it’s not hard to see how current immigration policies can undermine that resilience. Under the Obama Administration, the pace of deportations has actually accelerated, and families continue to face visa restrictions like the ones described by Pallavi Banerjee. One can only hope that the research presented in Miami will find its way into the minds of people who set immigration policies, and help push them in a direction that will keep families intact instead of tearing them apart.