Esau Torres is a father of three who had spent 17 years touring all over the U.S. with his band Los Malandrines. But in 2015, he decided to leave music behind—and to obtain a degree in business. 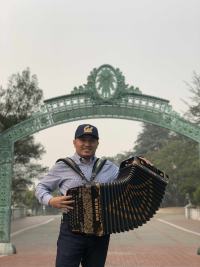 Torres began his journey at a local community college and within a few years had been accepted to his top choice: the University of California, Berkeley. Though it seemed like the obvious choice, Torres soon grew to regret the decision.

“They don’t prepare you for transferring to Berkeley as a student from an underrepresented community and that drastic change that you’re going to go through,” Torres says.

As he walked through the campus, Torres felt out of place. His mindset, molded by years of touring and running businesses, seemed to not connect with other students, even fellow parents. “I was at a point that I hated the university and hated being here,” Torres says.

Luckily, in early March 2020, days before the world shut down, Torres heard Ramon Ayala’s “Tragos Amargos’’ while walking through Sproul Hall. Torres followed the sounds of the Mexican hit song and found himself standing in front of a group of college students passing out flyers. They called themselves the Gammas, a nickname for the Latino-based fraternity organization Gamma Zeta Alpha.

At first, Torres was hesitant; the Gammas seemed like mostly younger men. But as the days passed and the members continued to invite him to socialize, Torres could not help but feel connected. They understood his struggle, had similar backgrounds, and could appreciate bands like Grupo Firme and Los Tigres Del Norte.

“What they did for me was create a support base, something to look forward to every day outside the classroom,” Torres says.

Torres isn’t alone. For many Latinos, the transition to college can be stressful. Aside from moving away from home, meeting new people, and choosing an educational pathway, there are cultural shocks that can range from no longer routinely speaking Spanish to not gathering with friends to watch El Clasico. Or even just missing some of mom’s tamales.

According to the 2021 State of Higher Education for Latinx Californians, Latinos are the largest ethnic and racial group in California, at 39% of the population—over half of whom are under 30 years old. Though 43% of all California public higher education students are Latino, only half of them ultimately earn a degree. In fact, only 14% of Latino adults in California hold a bachelor’s degree—the lowest of any of the state’s major ethnic groups.  And while enrollment and graduation rates are increasing for Latino students, achievement gaps persist.

What might help close these gaps? In 2016, a team of researchers published a study that tracked a group of undergraduates involved in the Casa Magdalena Mora Theme Program at UC Berkeley, which provides Latino students with weekly leadership seminars, as well as retreats and other events. The researchers measured their stress levels over time, looking especially at inflammation associated with stress.

Indeed, the team found that participating in Casa Magdalena Mora protected students against stress, says Rodolfo Mendoza-Denton, a professor of psychology at UC Berkeley and a coauthor of the study. That wasn’t a surprise. But what they didn’t expect was to see that students who resided in the theme-house had lower stress levels a year later. He says the research is able to “make the case that affinity groups actually help minority students cope with what can otherwise be a very challenging transition,” and not get in the way of student success.

“It’s almost like a little vaccine at the beginning of your stay at Berkeley,” says Mendoza-Denton.

These stories and studies reveal that Latinos might be able to help each other get through higher education by gathering in “affinity groups”—people linked by a common interest, purpose, or culture. In part, suggests Mendoza-Denton, that’s because these groups can serve as essential bases for students to connect with the larger campus community.

The results of the Magdalena study didn’t surprise Belinda Campos, an associate professor in the Department of Chicano and Latino Studies at the University of California, Irvine. She cited the importance of finding a relatable community that shares cultural backgrounds and helps navigate university systems.

“When we find other people that we can connect to, who can give us that moment of feeling that we have things in common with somebody else and they celebrate the things that we do,” Campos says, “then I think that gives you that space for belonging while you figure out how you’re going to belong at the university.” 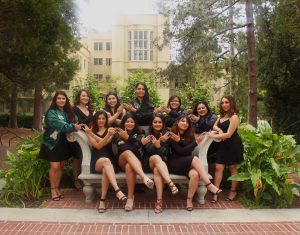 Leslye Salinas recently earned her doctorate in organizational change and leadership. She lives in Richmond, California, and works as a community schools manager at Oakland Academy of Knowledge Elementary. She’s also the national council president of all the Sigma Pi Alpha sorority chapters. Sigma is a Chicana/Latina-based sorority whose motto is “Mujeres con Cultura, Fuerza y Hermandad.” The sorority is different from typical Greek organizations. They aren’t part of any national Greek councils and there’s no “rush.” Sisters like to say, “We don’t choose you—you choose us.”

Salinas is proud of her accomplishment, but at one point in her college career, things weren’t so certain. She was born in Lima, Peru, and grew up in Berkeley. She attended St. Mary’s College High School and graduated with a 4.0 grade point average. She’s a first-generation citizen and a first-generation college student. When she applied to schools, she had her pick but eventually chose Berkeley—partly because she wanted to make her mom proud.

She had taken summer courses at Berkeley and was familiar with the campus, but in 2009, when she lived in the dorms as a freshman, she says nobody on her floor looked like her. “I felt really lost,” she says.

Her classmates had parents who had gone to Berkeley or Stanford and could help them navigate the university. Salinas didn’t have anyone to help her figure out how to achieve her dreams of becoming an immigration lawyer. “And so it was really exhausting as a freshman, just trying to navigate,” says Salinas. She felt ready to give up.

She found Sigma, but they weren’t accepting any new sisters that year. She hung out with them anyway, finding comfort in being with other Latinas who were often trying to decode the same institutional pathways. Salinas didn’t have to join to start benefiting from the cultural affinity group, she says. The sisters “literally started making bonds and friendships and relationships with us without even like [joining].”

In the spring of 2010, Salinas was able to join Sigma Pi Alpha—or “the Ellas,” as they call themselves. There, she found a rich cultural network that supported her and helped her navigate school. She got recommendations from her sisters on which professors to take, and the sisters shared books, an expensive and sometimes inescapable college expense. Ultimately, she graduated with a baccalaureate degree from UC Berkeley.

Greek societies like the Gammas and the Ellas can be especially well-suited for Latino students because they provide a surrogate family structure.

According to Campos, “Family relationships are at the core of social life among Latinos.” Campos says that “familism is indicated by valuing interconnectedness among family members, preferring family members as the first source of social support.” Campos argues these points, along with Heejung S. Kim, in a 2017 paper published in the American Psychologist Journal.

Unlike a typical methods-and-results paper, Campos and Kim integrated previous studies and presented a review of existing literature on the role of relationships in East Asian and Latino culture. Their goal was to find how these relationships, particularly close and family relationships, affect health. “To highlight, as we say, the patterns that help us to understand how culture is relevant for relationships,” Campos says.

In an individualistic cultural context, which is often seen in North American or European culture, a person’s desires are the most important consideration. However, East Asians and Latinos tend to be more broadly collectivistic, centering on environments where the most important consideration should be how desires fit in with the people around you.

There are differences between the two. In East Asian contexts, groups aim for harmony, with less positive emotion and more tolerance toward negative emotion. Among Latinos, the collectivism is more convivial. While the Latino approach to groups does focus on considering others before yourself, Campos found an emphasis on creating and expressing emotional positivity, and avoiding negativity.

“We (Latinos) do so in the context of engagement, support seeking, support giving, and trying to have positive emotionality with people,” Campos says. “That’s the way to find people together.”

Salinas says one thing that Sigma sisters are starting to talk openly about is their mental health. “There’s been a big societal [shift in] what’s acceptable to talk about [with] mental health and wellness and well-being than there was 11 years ago,” says Salinas.

While affinity groups can become an essential source of strength for individuals, Mendoza-Denton says it’s important for students to not close themselves off to other groups. “If you’re in a Latinx group, for example, don’t only have Latinx friends,” he says. “I can’t emphasize that enough.” (Many people in North America choose the gender-neutral term “Latinx” to describe themselves.)

Mendoza-Denton’s earlier research examined “the benefits of having majority-group friends in majority-group institutions.” He says people critiqued the work by saying, “‘Oh, now you’re saying that minority students need the great white hope to be able to succeed in university’—and that’s not it at all.”

Mendoza-Denton says you need both: a place for Latino students to celebrate and learn about their culture and “practice affiliating with out-group members.”

Nearly two years after joining the Gammas, Torres is “the happiest I have ever been in life.” He credits the organization for providing an environment where like-minded individuals can socialize and stay connected to their culture. But perhaps more importantly, Torres says the group has offered a trusted space and taught him the strength of building intimate, profound relationships.

“For me, the reason I’m the happiest I’ve ever been is because the relationships I have now are very deep, personal, and meaningful,” Torres says. “They [the Gammas] are part of my happiness and they know it because I communicate it.”