Philosophers and scientists have long argued about whether or not altruism exits. Those on one side say that people act selflessly to benefit others out of a natural, inherent quality of goodness; those on the other side say that behind every act of altruism is an ulterior motive, such as wanting to appear “good” in the eyes of the community, which is ultimately selfish. “Scratch an altruist and watch a hypocrite bleed,” wrote biologist Michael Ghiselin. 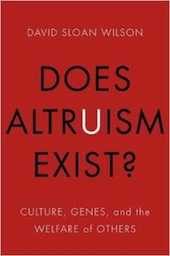 But in his new book Does Altruism Exist?, David Sloan Wilson says these arguments miss the point. Wilson, SUNY Distinguished Professor of Biology and Anthropology at Binghamton University, argues that what really drives altruism in society is not the intention of the person, good or bad, but the altruistic act itself and its effect on the community—in other words, its evolutionary function.

According to Wilson, Darwin was right all along when he suggested that human traits come down to natural selection. An individual trait can be passed along because it helps an individual to survive—for example, having dark skin in a hot climate—or because it helps a group to outcompete another group, even if having the trait costs the individual. Altruism falls in this latter category, says Wilson, and the evidence of its evolutionary benefits is all around us.

Wilson points to other species whose altruistic acts have furthered their survival over time, such as bees and ants. Worker bees or worker ants don’t get to reproduce; but, because they work to help their group overall, often at great cost to themselves, the hive survives. In the same way, humans that act for the sake of their group will also tend to come out on top, even if individuals within the group may fare less well in the process. Altruistic intent, he contends, is not important.

“When altruism is defined in terms of action and in terms of relative fitness within and between groups, it exists wherever there is group-level functional organization,” he writes.

Wilson says that evolutionary theorists need to get away from looking merely to genetic explanations for natural selection. The adoption of certain traits in a social group can be transmitted in other ways—for example, through culture or imitation. He argues that the layers of complexity in evolutionary processes can leave people misunderstanding how the traits came to be, and that too often scientists try to explain how altruism’s works—i.e., the neural processes involved—rather than why it’s here in the first place.

Of course, selfishness is also alive and well in our human culture. According to Wilson, selfishness survives because it can be adaptive for an individual within a group even if it isn’t adaptive between groups. If one acts selfishly, that individual may gain some advantage in terms of survival—if she eats more than his share of the community food, for example, she may live to pass along her genes. But selfishness does not do well at the between group level, because it harms the group’s chances of survival. This is why highly organized groups tend to have punishment mechanisms—like prisons or exile—to prevent freeloading or other selfish behavior.

Though Wilson’s book is purported to be for a general audience, many readers may find the technical explanations of evolution ponderous. Still, the book gets more readable and interesting when Wilson writes about the practical applications of this knowledge, such as trying to determine how best human societies should go about organizing themselves in order to promote more altruism.

For example, Wilson writes about how our current thinking in economics is basically wrong. The focus on greed (selfishness) as a way to strengthen the economy (for the group benefit) is based on flawed thinking about how group selection works. We should be organizing our economic policies to increase the greater good of our group, he writes, though we must also set up systems to prevent cheating (selfish behavior) in order to derive the most overall good.

“All societies that function well require mechanisms that coordinate actions and prevent exploitation from within,” he writes. “Whether these mechanisms count as altruistic or selfish, defined in terms of thoughts and feelings, is irrelevant, as long as they do the job in terms of action.”

Wilson has taken his evolutionary view and tried to apply it to whole communities, including his university’s “hometown” of Binghamton. Some of the work coming out of his Evolution Studies program makes for fascinating reading, including how he and his colleagues have found ways to measure altruism in large populations, allowing them to study the impacts of social environments and deliberate interventions on pro-social behavior (like altruism) at a city-wide level.

But it seems that Wilson’s main goal in the book is to convince scientists to accept his unifying theory. To that end, his book makes an important contribution to altruism research, though some may quibble with his conclusions. In the end, his reasons for making the argument are clear: he wants us to understand that there are practical reasons for trying to bring out the best in our species, and that our survival as a species depends on it.

“If we want the world to become a better place, we must choose policies with the welfare of the whole world in mind,” writes Wilson. “As for as our selection criteria are concerned, we must become planetary altruists.”