A slew of organizations—from the Republican National Committee to MTV—spend millions of dollars trying to motivate Americans to vote on Election Day. But all that money won’t accomplish much if its targets lack a crucial trait: altruism.

Indeed, a new line of research has challenged some age-old assumptions about why people vote, suggesting that it’s concern for the welfare of others—not narrow self-interest—that sends people to the polls. 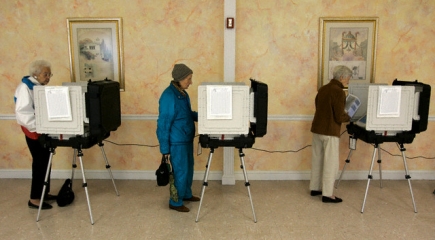 In one study published earlier this year, Richard Jankowski, a professor of political science at the State University of New York, Fredonia, found that altruism is the single most important factor in predicting whether someone will vote. Jankowski recorded people’s responses to questions measuring their level of concern for others, and then compared those responses with their voting data from the 1994 general election. He found that if people expressed concern for helping others, they were far more likely to have voted. In fact, a sense of altruism was even more influential than people’s age, income, or education level, generally considered the most important factors for voting.

“Politics is about the collective good, and unless you understand that, you can’t explain why people get involved in politics,” says Jankowski.

That view clashes with the traditionally dominant school of thought in political science and economics, which sees humans strictly as hyper-rational animals, acting only in their own best interests. By that logic, people would get involved in politics only insofar as it would serve their own personal gain—what economists call “fully optimizing” behavior.

Yet as Jankowski points out, by that theory, people shouldn’t be voting at all. The chances your single vote will make a difference are infinitesimally small, and thus so are the chances your vote will bring a real benefit to yourself personally. So any chance for individual gain wouldn’t outweigh the time, effort, or other costs involved in casting your own vote. But people continue to vote, even if they do so in some years (and countries) more than others.

“It seemed to me that if all these very smart people, who had thought about this problem for such a long time, hadn’t been able to figure out why self-interested, fully optimizing people would vote, then there must be something else [motivating voters],” says James Fowler, a professor of political science at the University of California, San Diego, who has also conducted research on altruism and voting. “Either we’re not fully optimizing, or we care about things other than ourselves.”

In Fowler’s own research, he had study participants play a “dictator game,” in which one player is given a certain amount of money, then asked to divide that money between herself and another player. The more they were willing to share, the higher their altruism rating; the less they shared, the lower their rating. (Fowler dubbed these more selfish players “egoists.”) In an article published last year in The Journal of Politics, Fowler reports that people who displayed more altruism in the game were significantly more likely to have voted in the most recent election.

Fowler explains his findings this way: Partisans are people who believe the outcome of an election matters—that a particular candidate or party will do a better job than others. So if you care deeply about the well-being of others but don’t think one candidate will do more to improve people’s lot, you’ll likely look for a different way to channel your altruistic impulses. “It’s altruism combined with the belief that politics matters” that predicts who will vote, he says.

Fowler and Jankowski’s findings resonate with previous research showing that people tend to consider how their decision will affect their group, more than just themselves, when deciding how to vote. Fowler says that, considered together, these findings suggest that the prevalence of “pocketbook” voting—voting motivated by one’s own financial interests—is largely overrated.
So do candidates and their campaign staff recognize the political power of altruism? It may not be part of an explicit strategy, but it is something campaigns are aware of, says Dan Schnur, who was the national director of communications for John McCain’s presidential bid in 2000.

“We understand that very few voters believe there’s an absolute quid pro quo in exchange for their support,” says Schnur, who now teaches courses on politics at the University of California, Berkeley. “They’re voting on behalf of a community interest rather than on merely a self interest. Most voters know that a politician isn’t likely to show up on their doorstep with a bag full of money or a better school for their child and no others.”
Jankowski agrees that campaigns don’t approach voters as purely self-interested animals. “Look at any candidate,” he says, “they’re pitching their argument not so much for what they can do for you personally, but for the country as a whole.”

But that doesn’t mean political campaigns or parties are any closer to boosting voter turnout. Jankowski notes that Harvard political scientist Robert Putnam has documented a decline in altruism in America since the 1960s, which Jankowski links to a corresponding decline in voter turnout over the same period. He suggests that any get-out-the-vote effort might be futile without first addressing the psychological reasons why people vote. A more fundamental goal should be to cultivate altruism in the electorate.

“Until you get that broader sense of altruism developed, you’re going to see a perpetual decline in voter turnout,” says Jankowski. “They can have a small effect, these campaigns. But on the whole, I don’t see them having much effect until we get at the root cause of what drives people to get politically involved.”