Do you fork over your hard-earned money to homeless people on the sidewalk, despite the objections of friends and family members? What about when you hear a sob story on TV from a charity halfway across the world?

If you answered yes to these questions, the reason may lie in your genes. According to a recent study, a slight variation in a particular gene is associated with altruistic behavior. 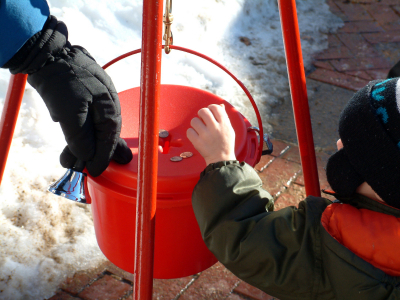 In the study, published in the journal Social Cognitive and Affective Neuroscience, German researchers took a saliva sample from 101 men and women, using the sample to extract DNA from the participants’ cells. The researchers were focusing on the three variations of a gene called the COMT gene, which influences how certain neurotransmitters are activated in the brain. Previous research has linked those particular neurotransmitters, including dopamine, to positive emotions and social behaviors like bonding.

After providing the saliva sample, the participants had to try to memorize a set of numbers and repeat them as accurately as possible; they received five Euros for completing this memory test. After the test, they could try to increase their reward by gambling with it.

The researchers discovered that people with either of two of the variations of the COMT gene (called the Val/Val and Val/Met variations) donated twice as much money to the charity as people with the other variation (called Met/Met), regardless of their gender. In fact, more than 20 percent of the people with the altruistic variations donated all of their money.

While researchers have had evidence for years that altruistic behavior is at least partly influenced by genetics, that evidence has come mainly from studies of twins reporting how altruistic they are, which have found that people with identical genetic material show similar patterns of altruism. This is the first study to link altruism to a specific gene.

Psychologist Sebastian Markett, a study co-author also at the University of Bonn, says the results show how a single genetic mutation can have a large effect on our behavior. But he believes science still has much to learn about the genetics of altruism.

“There must be more genes which influence altruistic behavior whose association has not been discovered yet,” he says. “Our future objective will be to identify all of those genes and how they interact with each other to eventually put a pretty complicated puzzle together—with the goal to understand who we are and why we are how we are.”

This is wonderful - thank you.

thank you for sharing that post ..
it’s really great

I don’t understand how anyone could believe altruism isn’t genetic and why they are just now doing research on this? George R. Price and his famous Price Equation proved that altruism was genetic a long time ago…so what are these scientists even doing? Nothing?