Over the winter holidays, more than 1,600 Greater Good readers took our altruism quiz, which measures levels of generosity and giving.

After taking the quiz, participants learned how altruism might affect their happiness, and got tips on how to boost their charitable side.

So, Greater Good community, how altruistic are you?

Well, you averaged 84 out of 100 on the quiz, which was well into the high range of the altruism scale. At the end of the quiz, we asked a few questions about each person to see what qualities were linked to altruism. Here’s what we found. 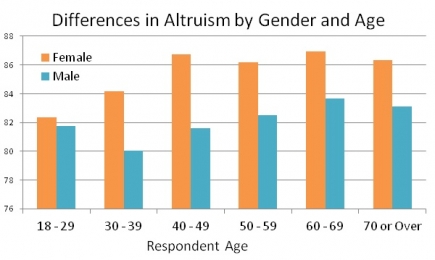 Gender, age, and income differences
Gender and age both had a significant connection to altruism, with older respondents and women both reporting higher levels of altruism.

Money also seemed to be important: Higher income correlated with reports of more altruism—unless you were a man.

As women’s incomes increased, they became more altruistic, but wealthier men weren’t generally more altruistic than less wealthy ones. (Note that the graph represents relative trends between men and women—this means that the graph limits our ability to compare different groups of men and of women directly against each other.)

Recent work by UC Berkeley researchers, including GGSC fellows and affiliated faculty, found that people of lower socioeconomic status are generally more inclined to help people in need; related research out of Berkeley has also found affluent people are more likely to be scofflaws.

But the results of our quiz suggest that men and women might differ in their responses to having wealth. Of course, our quiz is an imperfect instrument for measuring altruism. From the relatively limited group that took our quiz, the evidence does suggest that wealth seems linked to altruism, and that it might be interesting to further study how gender relates to wealth and altruism.

Political and spiritual values
We also found that greater spirituality strongly correlated with greater altruism among all three political categories we included: conservatives, moderates, and liberals.

It may surprise some of you to learn that more conservative political views were linked to higher altruism. However, further analysis revealed that the link between politics and altruism varied a lot depending on people’s level of spirituality.

If you still want to take this quiz and compare your score to our average or to other findings above, you can do so here.

Don’t forget to let us know what you think of these findings in a comment below!