What motivates us to help other people?

A tricky question, no doubt. Yet a recent study suggests that the answer may sometimes lie in a single word.

In the study, French researchers had a 19-year-old girl (who was working with the researchers) approach men between the ages of 30 and 50 as they walked near the downtown of a small city. She asked them if they could direct her to a nearby street. In some cases, the girl asked the man for directions to “Valentine Street”; in other cases, it was “Martin Street.” (Since there wasn’t a street in the city with either name, most men said they didn’t know the answer.)

After the man went on his way, 100 feet down the street he was approached by another young woman, who asked him to confront a nearby group of “disreputable-looking” 20-year-old boys who had taken her cell phone, and get it back from them. (This second girl and the boys were also working with the researchers.) 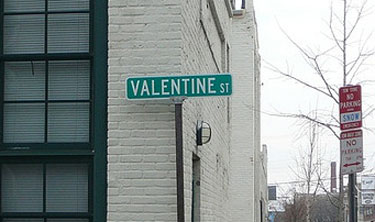 The researchers wanted to see whether simply hearing a word that brought to mind images of love—“Valentine”—would make the men more likely help a damsel in distress.

Sure enough, the results, published in the Swiss Journal of Psychology, show that when men were made to consider “Valentine Street,” they were nearly twice as likely to help the woman as when they’d heard “Martin Street.” Out of 60 men asked about Valentine Street, 22 were later willing to intervene on the second girl’s behalf; of the 60 asked about Martin Street, only 12 were willing to help.

The results suggest the power that subtle social cues can have on our behavior, specifically on our propensity for altruism. The researchers speculate that, in this case, subconsciously evoking the idea of love also subconsciously evoked ideas about gender roles. So when the men were confronted with a situation that called on them to be chivalrous and heroic, they were more likely to step up.

Similarly, previous research has found that “priming” people with a single word or concept can affect their behavior—for instance, when people hear words linked to the elderly, such as “retired” or “Florida,” they walk more slowly. Other research has found that asking people to recall a memory of feeling in love also made them more likely to help others.

This study, however, was the first to show that simply mentioning a concept related to love can have similar effects, even outside of a romantic situation or without explicitly conjuring up a memory of love.

“The present research,” write the researchers, “provides evidence that chivalrous helping … still exists, and that it can be activated by a single word.”

Yes I agree with that. I think if everyone would read a book by the Dalai Lama the world would be a more lovely place.. especially for kids.

But there are also differences between the french studies and american reality.

It’s very usefull information that you share over here.

What a curious study…whoever drafts those study proposals has quite an imagination 😊 but on a more serious note, are 60 men in each group really enough to be able to draw confident conclusions from the study? The sample seems rather small, plus there are probably a lot of other factors (cultural, personal associations with the world Valentine, or even personal preferences of those men) that could have- and most likely did- influence their decision on whether to intervene or not, thus distorting the results of the study.