The police were concerned. They had investigated diversity in their large U.K. force and discovered that when female officers and staff reflected on their time being pregnant, only 39 percent felt supported by their managers. 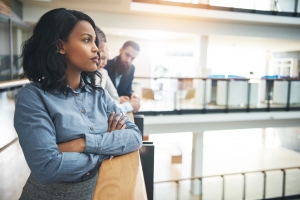 In collaboration with the police, my colleagues and I at the Behavioral Insights Team were tasked with creating a more supportive environment for those female employees. In part, this would mean improving how managers communicated with and supported their female employees: Of the 44 percent of women who were moved to a different job after they announced they were pregnant, only half were consulted about it, and only 33 percent reported that they had a conversation with their line managers about maintaining contact throughout pregnancy.

We hypothesized that stereotyping, prejudice, and bias might be at play. Perhaps managers assumed that their female subordinates needed to be protected from the outside world, or that women’s career ambitions would evaporate because of the pregnancy.

We thought perspective taking might help. Perspective taking consists of imagining what other people are feeling and thinking. In lab experiments, it has improved communication, reduced the tendency for stereotyping and prejudice, and increased empathy. Perhaps, we thought, it could do the same for the police force.

We designed a 15-minute, online perspective-taking task for line managers, asking them to imagine what it would be like to be a pregnant woman. In the intervention, managers first completed a short writing exercise designed to boost their self-efficacy by recalling a situation in which they were able to overcome challenges to help another person. The managers were then presented a short description and picture of a pregnant police officer, Anna, and asked to write a few sentences about her life as they imagined it, including her experiences at work and with other people. Finally, the managers were encouraged to write down a few specific things they could do in the following week to better support or communicate with their female staff.

The results surprised us. In a randomized controlled trial with over 3,500 managers from the police force, we found no positive impact. In fact, the line managers who completed the perspective-taking task performed slightly worse in hypothetical scenarios asking how they would support female staff.

But maybe we shouldn’t have been so surprised: Gender stereotypes are notoriously sticky, in part because we’re often unaware that we hold them, and they can influence impressions and judgments outside of conscious awareness. This means that even when someone genuinely believes they’re treating men and women equally, biases based on stereotypes can creep in. Gender stereotypes are also sticky because, despite progress on many aspects of gender equality, such as universal suffrage and education, stereotypes are still perpetuated in realms like media and entertainment.

Changing people’s conscious and unconscious beliefs about women is hard, and programs to do so have limited impact. Research on diversity and unconscious-bias trainings also bear this out: Trainings are mostly ineffective at changing behavior and can even backfire, especially when trainings are mandatory and participants resent being sent to the course. Diversity trainings may also fail if they create the illusion that the organization has now fixed its diversity problems.

Similar mechanisms may have been at play in our study, explaining why our intervention wasn’t effective. Or perhaps the line managers simply did not know how to be more supportive, even if they wanted to. Future interventions should offer specific tools for behavior change, combined with organizational support to maintain the new behaviors.

Despite these challenges, there’s hope. But the solution won’t come from getting rid of the stereotypes inside our heads. Instead, argues behavioral economist Iris Bohnet, it will come from changing the stereotypes and biases inside our systems, systems such as hiring and selection in organizations, or how we assess students in schools.

Take hiring processes, for instance. This is a system that consistently disadvantages women, as shown by the low levels of women in senior positions. My colleagues at the Behavioral Insights Team launched Applied, a hiring platform designed to remove bias from hiring decisions. It does so through various evidence-based features like removing a candidate’s name or other background markers that could affect a candidate’s likelihood of being invited to an interview.

“Gender stereotypes are notoriously sticky, in part because we’re often unaware that we hold them”

The first step that any organization can take is to look at the data on your people. Dig into gender differences in work allocation, development opportunities, salary and bonuses, and promotions and retention in each grade. Where are there gaps? Why? In the U.K., many employers have recently begun looking at their data due to the new legal requirement to publicly report their gender pay gap, a measure that reflects the difference in hourly wages between men and women across all grades.

Once an organization has identified potential systemic biases, it can begin to apply behavioral science. But that’s only the beginning: It’s critical for any organization to keep monitoring that original data, to evaluate interventions, and to set measurable goals for change.

What’s more, when solutions fail, we need to openly broadcast those failures. We can only get a sense of what genuinely works to improve gender parity if we show when initiatives have gone wrong or turned out to be a poor investment. I look forward to continuing to solve this problem and promise to keep sharing failures—and successes—along the way.