There are many ways to measure the power difference between men and women. 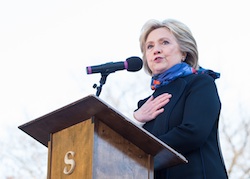 In social science, power is the ability to influence another person’s behavior. Exercising power can be brutal, as when men target women for sexual harassment and violence—which has had the cumulative effect of influencing what women wear, how they walk, who they talk to, or where they feel safe. Power differences can also arise from psychological biases that affect women and men in similar ways—for example, how they both see men as more suited to breadwinning or leadership roles.

For many, Hillary Clinton’s campaign for president highlights these power differences—and promises to help reduce them. Clinton has endured countless crude sexual comments on social media, akin to street harassment, but the biggest obstacle to her election may be traditional womanly ideals that often discourage women from seeking and exercising power. For evidence, look no further than Congress: 20 percent of the members of both the House and the Senate are women—one of the lowest levels of political representation in the world.

Does that constitute an argument in favor of Hillary Clinton’s campaign? For some, it does. But whatever your political leanings, the campaign has something to teach all of us about the science of men, women, and power. Here are three points to keep in mind. 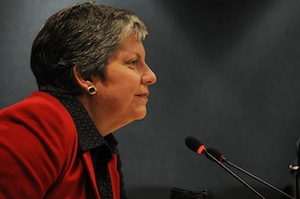 Janet Napolitano is known as a tough leader. As chief of Homeland Security, Napolitano oversaw a record number of deportations of undocumented immigrants. When she became president of the University of California, she quickly gained a reputation as a hard-as-nails negotiator—one who often goes head-to-head with other female leaders in the system.

Kathryn Lybarger is one of those leaders. She’s president of both the California Labor Federation and AFSCME Local 3299, which represents more than 20,000 workers at UC. The two women are often at odds with each other on issues like pay and benefits, but Lybarger also claims that Napolitano has a vastly more collaborative style than her predecessor, Mark Yudof—albeit one that doesn’t always lead to agreement at the negotiating table.

Unlike Yudof, Napolitano meets regularly with labor leaders and, by all accounts, does at least make a show of listening to their concerns. “Working with Napolitano is different,” Lybarger says. “Is there a gender difference that is responsible for that? I don’t know.” She adds: “I do know that if you want to get something done, involve women. They’re more likely to pick up on body language. They hear emotions in voices.”

Lybarger’s experience doesn’t surprise Laura Kray, a professor at UC Berkeley’s Haas School of Business and an expert in women’s executive leadership. She says that empirical studies show that women do tend to be more empathic and collaborative leaders. “Women are more relationally oriented,” says Kray, “and thus more likely to use power in a socially responsible manner.”

Men with power will also tend to treat men and women differently. Powerful men, says Kray, are even more likely to lie to women than to other men. They are also more likely to try to manipulate women than men, which can create a Machiavellian psychological environment that can be especially difficult for women to navigate.

2. But having power can reduce empathy and cooperation

This doesn’t mean that women are incorruptible. In fact, women are still subject to the same psychological forces that lead men to abuse their power.

According to UC Berkeley psychologist and Greater Good Science Center Director Dacher Keltner, the experience of having power has the same negative effects on both men and women, reducing their empathy, gratitude, and other “pro-social” skills. This means that, though women start at a higher baseline than men, their ability to take another’s perspective often falls when they get into positions of power. As Keltner writes in his Greater Good essay, “The Power Paradox”:

When researchers give people power in scientific experiments, those people are more likely to physically touch others in potentially inappropriate ways, to flirt in more direct fashion, to make risky choices and gambles, to make first offers in negotiations, to speak their mind, and to eat cookies like the Cookie Monster, with crumbs all over their chins and chests….

My own research has found that people with power tend to behave like patients who have damaged their brain’s orbitofrontal lobes (the region of the frontal lobes right behind the eye sockets), a condition that seems to cause overly impulsive and insensitive behavior.

Keltner’s research indicates that women are not immune from this paradox, which says that the very qualities that help us seek power—like charm, empathy, or humility—are the ones that having power can damage. If we see fewer abuses by woman leaders, that might simply be because there are fewer women in power.

Indeed, Napolitano herself provides examples of the power paradox: When students protested the prospect of tuition hikes in March, she referred to the protests as “crap.” That, says Keltner, “is a classic abuse of power—to use rude language to describe low-power people.”

3. Women can bring more women to power—but not all do

There are good reasons to be skeptical of the notion that a win for Clinton will usher in a feminist utopia—or even just greater political power for women.

When President Obama was elected in 2008, there were 41 African Americans serving in the House and one in the Senate. Almost eight years later, those numbers have increased by five and one, respectively—progress, perhaps, but certainly not a revolution. In addition, many of Obama’s supporters have been disappointed by similarities between his foreign policy and that of George W. Bush.

Thus it shouldn’t surprise us that Janet Napolitano’s leadership has not triggered a more fundamental transformation in the University of California. That doesn’t mean nothing is different. Keltner claims that her mere presence in the top spot has caused the psychology department to ask itself how to hire and promote more women.

“We’re in this interesting historical moment,” says Keltner, whose book The Power Paradox comes out in May of this year. “What will happen 30 years from now, when there are even more women in leadership?”

Many studies suggest that female leaders do encourage other women to pursue those roles—but only when certain conditions are met.

For example, a 2015 study published in the European Journal of Social Psychology found that women leaders who have weak gender identification show more favoritism for men than for women. In some cases, they’ll even be more hostile toward other women. This effect doesn’t hold in an environment where women are fairly represented, perhaps because women in unequal workplaces worry about being seen as favoring women, so they overcompensate. In short, equality creates the conditions for even more equality, but in the meantime, it helps for women in leadership to be consciously aware of their ability to change things for all women.

It’s important to note that social science deals in averages: What describes women as a group might not describe individuals like Napolitano or Clinton at all. While stereotypes can be positive, those aren’t any more useful in evaluating individuals than are negative ones. An argument for women in leadership is not necessarily an argument for one specific woman.

The bottom line? The science of power suggests that Clinton’s election could increase women’s political influence—but they will face the same pitfalls as their male counterparts.