Are women and men receiving equally good care from their physicians? Not according to feminist writer Maya Dusenbery, author of the new book Doing Harm: The Truth About How Bad Medicine and Lazy Science Leave Women Dismissed, Misdiagnosed, and Sick. Instead, she argues, the medical field is rife with gender disparities, leading to poorer outcomes for women. 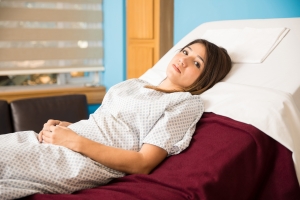 Throughout history, women’s experiences have been overlooked or discounted in doctor’s offices—and in medical and scientific research, she writes. So where has that left us today? Diseases that disproportionately affect women—like autoimmune diseases, fibromyalgia, and many chronic pain conditions—have been under-researched, leaving doctors without a clear understanding of how to recognize and treat them. And doctors dismiss the accounts of women patients too often, leading to a “trust gap” that affects women’s health care in disproportionately negative ways.

However, new insights are beginning to emerge showing how women’s well-being has been hampered by gender disparities. Dusenbery’s book, based on two years of research into a host of conditions, exposes the systemic causes of these disparities and provides critically relevant information for the public—and for those in medicine, psychology, and the research sciences.

Jenara Nerenberg: What is the “trust gap” in medicine for women?

Maya Dusenbery: I started calling this issue the trust gap as I started reading research and learning of anecdotes from women who were having a hard time getting diagnosed. Their symptoms were being dismissed or minimized, there was an implication that their physical symptoms were all in their heads, and they were simply being offered anti-depressants or told they were “making their symptoms up” to get attention.

As a feminist writer, I wasn’t surprised to find that women’s voices weren’t being listened to. But I wasn’t sure which exact stereotype was operating here—like why doctors seemed to think women wouldn’t know that they were actually sick and needed medical attention.

As I dug into the research, I found this enduring trust gap had its roots in our notions of “hysteria” this so-called disease of the 19th and 20th centuries. After Freud, it became a wastebasket category where anything that couldn’t be medically explained was attributed to the unconscious mind, which is convenient and dangerous. So if collectively the field of medicine has this idea—that if a symptom doesn’t seem to be explained by a physical disease, you can blame it on the patient’s psychological problems—then they’re just not going to do the scientific research that’s required to explain those symptoms in biological terms.

JN: How did we get here? Is this current gap only a function of the history and evolution of the medical field? 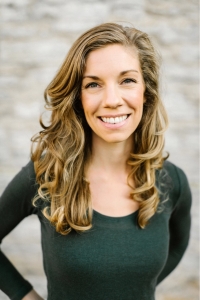 MD: It’s in part due to gender stereotypes that exist across many realms, where we expect men to be stoic and not admit vulnerability or weakness. A man is thus already more reluctant to seek help in the first place; so, when he actually does, his reports of his symptoms are taken more seriously. Women are culturally given more permission to express emotion and pain and ask for help. But somehow that leads to this sense that they should not be taken as seriously, which is illogical, of course.

History has made women caught in this self-fulfilling prophecy. For example, autoimmune issues are estimated to affect 50 million people in the United States, and 75 percent of them are women. So, they’re very common, and yet the medical system is pretty bad at diagnosing them. There often aren’t autoimmune specialists, and many primary care doctors don’t get proper training on how to diagnose them.

Many patients end up going to multiple doctors over many years complaining of fatigue and pain before they’re properly diagnosed. That not only means a long diagnostic delay; but each doctor she sees on that journey often doesn’t hear that four years later she ends up getting diagnosed with an autoimmune disease. And so doctors get the impression that their offices are filled with women who are complaining of symptoms that aren’t explained.

JN: Does the trust gap shrink when doctors and nurses are themselves women, or are there larger forces at work keeping this gap open?

MD: I didn’t come across any systematic research on that. But of the women I interviewed, plenty of them had stories of being dismissed by female physicians. I think the roots of the problem are in unconscious bias and systemic bias. It’s not about not wanting to care for women or not liking women—it’s not about conscious prejudice, I don’t think. Even the very best doctors just aren’t getting the medical knowledge that they need in their training.

JN: Is the lack of research on vulvodynia [pain in the vulva], in particular, more strongly affecting the trust gap? Given that vulvodynia relates to sexual health and our intimate lives, it seems like an area that would make women feel particularly unseen.

MD: Yes, definitely. In the book, I mentioned how vulvodynia was understood and discussed in the literature historically and how it had the same trajectory [as other chronic pain conditions] of first being seen as psychogenic and then later came to be understood as a chronic pain problem. But it actually took longer for that change in understanding to happen when it came to vulvodynia, by comparison.

I think it ties back to the history of “hysteria” and this Freudian idea that psychological distress is converted to physical symptoms. It’s been difficult for medicine to see [vulvodynia] through any lens other than sexual abuse and emotional distress. Another factor is this historical idea that women and their sexuality are so mysterious and inexplicable. One woman I talked to was not getting adequate help from her doctors—one female physician even told her, “There’s so much we don’t know about the vagina.” And I’m sure that’s true, but then why aren’t we doing the research and why isn’t that area getting research funding?

JN: What surprised you the most in doing the research for this book?

MD: I knew that in the early ’90s there had been advocacy around putting on the public radar the issue that women were really under-represented in clinical research. That spurred a change in federal law to ensure that National Institutes of Health–funded research includes women and that results should be analyzed by gender. 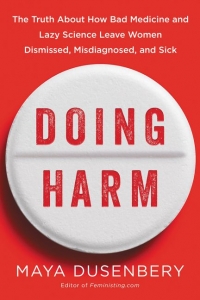 But I was surprised to see what a long lag time there is before any new scientific knowledge gets incorporated into education and medical practice. So many problems that stem from the knowledge gap [the deficit of knowledge that we have about women and the conditions that disproportionately affect them] are due to the fact that, for a long time, we were studying mostly men and we weren’t paying attention to sex and gender differences. And even though some new knowledge is out there, it’s still not the norm to analyze results by gender.

At the start of my research, I also didn’t fully realize how much silence has surrounded some of the experiences of women in terms of the trust gap. They often internalize the experience of being dismissed by doctors. Even as so-called “empowered,” highly educated, and privileged patients, there’s still a lot of deference given to medical professionals and physicians. It’s hard to push back when an expert is saying, “Nothing is wrong.”

JN: What is your biggest takeaway? What can we do now to begin to address this gap?

MD: With the #metoo activism, I’ve been feeling more optimistic about the power of women’s stories to help spur some real change. I think there’s power in women seeing that their experiences are similar.

The problem with the trust gap is that doctors are not getting the feedback they need to see that this is a widespread problem. There are some doctors and scientists working on various parts of the problem, but my hope is that more work is done on seeing how these problems are connected.

I want to make clear that it shouldn’t be on individual women to have to become super advocates for themselves and super educated and learn everything in order to get proper medical care. We should be able to rely on the medical system. I hope patient advocacy can help birth changes, but that people within medicine will really take on this problem. They’re the ones who we need to fix it.