Despite its seemingly confrontational title, Roy Baumeister’s Is There Anything Good about Men? is an attempt to get past the age-old war of the sexes. 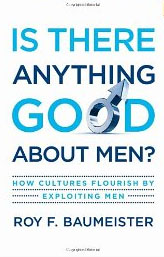 Baumeister, a renowned social psychologist and professor at Florida State University, starts by rejecting the idea that men and women are natural enemies who continually exploit and oppress each other, and that one gender is inherently “better” than the other. To him, the relations between the genders are more cooperative and complementary than antagonistic: Throughout history, men and women have often excelled at different tasks, contributing to each other’s welfare in their own ways.

Baumeister methodically supports this argument by drawing on scientific research. Studies suggest that women thrive in the small, intimate sphere of close relationships, where people connect one-to-one; men, on the other hand, seem to do better in the larger social sphere, where their relationships are more numerous but also more shallow. Men are more “agentic” than women, meaning that they tend to exhibit more autonomy and generally regard themselves as responsible for getting things done; women are more communal than men—they tend more to care about others, want to be close to them, and take care of their needs. Typically, women care more about being lovable and men care more about being capable. Indeed, some studies suggest that the female brain is better equipped for empathy and the male brain for understanding and building systems.

As with any social scientific generalization, there are many exceptions to these rules—they hold for most but not all men and women—but they are by and large true according to the research Baumeister cites. He concludes that these general differences in the inclinations of men and women have determined how human culture has taken shape.

The large-group activities, elaborate social systems, and large networks of relationships are simply favored more by men than women; as a result, men gained higher status in areas, like politics and business, in which those types of relationships are more valuable. Women, by contrast, were less inclined than men to thrive in large systems, but their intimate, sensitive, nurturing relationship styles were vital in areas like child rearing. (Did you know that people who have at least a 10-minute conversation with a woman at any point during the day report being happier that day?)

According to Baumeister, this has been the driving force behind gender inequality. Yet Baumeister reminds us that while men may occupy the highest ranks of society, they occupy the lowest ones as well—just look at the disproportionate number of prisoners or the homeless who are men. His argument, as suggested by the subtitle of his book, is that cultures “use” men for high-risk (yet also high-payoff) jobs that promote cultural progress.

To achieve this progress, men are more expendable than women. A whopping majority of those who die in the line of work or on the battlefield are men, and, as Baumeister notes, most men know that in an emergency they would be expected to put themselves in harm’s way so that a woman could be saved. His takeaway point is that despite apparent inequality between the sexes, men don’t necessarily enjoy more privileges than women, just different ones.

Reflecting excellent scholarly work and a willingness to address a controversial topic head-on, Is There Anything Good About Men? is a well-written, thought-provoking, and utterly insightful book—one that will give you a fresh perspective on the relationship between men, women, and culture, and deepen your appreciation of the complementary (not opposite!) sex.