Why do so many of us get pleasant, uncanny sensations when we throw a coin in a fountain and see it resting in the water below? What’s the cultural psychology here? What do such coins have to do, for example, with rock concerts and the movie It’s a Wonderful Life?

It’s best to start by reviewing the shift in perspective that occurs when the coin moves out of our hands and into the fountain (or pond…but fountains make better pictures). When we grip that penny or other coin in our hands, we’re totally in control. The coin is literally “in the palm of our hands.” 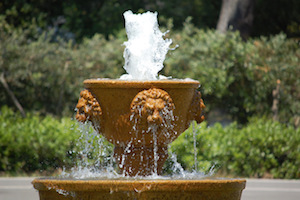 It’s also intimately connected with us through what anthropologists call “contagious magic,” the principle that physical contact creates a bond between people and objects, a principle that’s affirmed every time someone pays thousands of dollars for a piece of clothing worn by Jackie Robinson or John Lennon, or avoids the chair recently used by someone they don’t like.

The same principle applies at the edge of the fountain. We’ve kept our coins close to our bodies in our pockets and purses, and now we’re holding them in our hands. Through physical contact, these coins have become an extension of ourselves—a light-hearted, personal avatar.

Then we throw the coin in the water and the whole picture changes. We lose control. We let go of our avatar, and suddenly it looks tiny in the water, much smaller than it did in our fingers a second ago. Often we can’t even be sure which coin is ours, lying there among all the others. Our individual coin is now just one of many. What do you call this reversal in perspective?

The essence of awe is marveling at a force greater than oneself, like looking up at the sky or ocean. Through the sudden miniaturization of the coin thrown in the fountain, we experience a hint of awe at the vastness of nature (water), which adds to our uncanny, magical sensations.

Most people probably wouldn’t initially think of this coin throw as an experience of “awe” because it lacks the grand scale typically associated with that word, in contrast to panoramic views from high mountaintops. In fact, social psychologists studying awe have tended to use large-scale stimuli in their experiments: A 2015 study, for example, showed that subjects who watched videos of nature or gazed up at trees over 200 feet high, the tallest hardwoods in North America, were more likely to report feelings of awe and “the presence of something greater than myself” than control groups.

Still, a few years ago, when I asked Dacher Keltner, a leader of this research movement and founding director of the GGSC, if the same awe principle could be scaled down and applied to wishing wells, he agreed it could. And his statement was consistent with the position that he and co-author Jonathan Haidt took in their foundational paper on awe, where they noted that awe can also be elicited by beautiful art or music. The key point, they argued, is that true awe doesn’t just involve physical or even mental vastness, it also involves mystery—an element of incomprehension. For a real experience of awe, like looking at a sublime work of art, we have to confront something that we can’t quite wrap our minds around.

If fountain coins contain such a mystery, what is it?

In another word: society.

Mass society is simply too big for any of us to fully comprehend. You hear people talk about this thing called “American culture,” but you will never personally know the 300+ million people who make up this sprawling abstraction. (The United States is my primary example because that’s the place I’ve studied the most, but these explanations could also be applied to other mass societies.) It’s not even possible to imagine all those people sitting in the same place. Yet when the coins from numerous strangers rest together in the fountain, we get to visualize the U.S. and our connection with each other.

It’s not a coincidence that the visualization combines water and money. Money only works if we trust each other, as anybody who has ever experienced a bank run can attest. And water is the life force that runs through our bodies and our entire planet. In an extended form of contagious magic, water physically envelopes and connects all those coin-avatars lying in the fountain. Seeing all that money in water, then, is like seeing American society, or whichever social group is most relevant to the coin throwers.

In movie terms, the fountain coin pulls off the same feat accomplished by It’s a Wonderful Life: It infuses cold money with a sense of love and communal belonging, like that famous scene that makes practically everyone tear up, the final scene where the people of Bedford Falls shower George Bailey with their personal savings and save the bank.

The difference is that these bills connected George Bailey with family and friends, whereas the fountain coins connect us with strangers. Fountains are more like “pay it forward” purchases for the next person in line, or like a sports event, rock concert, or political rally. In the best cases, being surrounded by all those strangers gives you a slight buzz, a giddy feeling, what the sociologist Émile Durkheim long ago called “collective effervescence.” Fountain coins similarly provide collective effervescence, though, again, in a mild, controlled fashion.

Here, too, psychological experiments have given new life to anthropological insights. Keltner and his colleagues have shown, for example, that those research subjects who watched the nature videos or gazed at the tall trees were more likely to agree with statements like “I feel part of some greater entity.” And that greater entity wasn’t just nature, it was also society. Subjects experiencing awe were more likely to act generously while later playing a game, and to help someone pick up the pens they dropped on the ground. In multiple experiments, these social psychologists have shown that awe correlates statistically with “pro-social behavior.”

I would include throwing coins in fountains as “pro-social behavior,” and the many students I’ve worked with tend to agree. For example, over 90 percent of my undergraduate students, hailing from states all over the Western and Midwestern U.S. and in multiple classes I’ve taught over the past three years, have reported that they would rather throw a coin in a fountain with many other coins already lying there, rather than one with just a few coins. And they said that in their lives they have only thrown coins in fountains or ponds where they could see the coin resting in the water, not oceans, rivers, or lakes. This premium on seeing numerous coins positioned side by side supports the argument about the coins being an image of collective belonging.

After seeing this essay, Dacher Keltner pointed out that the consistency in the physical motion of throwing the coins in fountains also brings about an integration of the individual with the collective, like the first move in a folk dance. Keltner’s fantastic point is completely supported by my students. For example, the vast majority, 16 out of 19 students in one class, reported throwing coins in the fountain with the exact same motion: a gentle underhanded toss. The only exceptions to this rule all fell into another clear cultural pattern: throwing the coin over the shoulder, as they’ve seen done in Disney cartoons and movies. And when I have observed students and others throwing coins into fountains in Salem and Portland, Oregon, these same patterns prevailed. I’ve never seen someone throw a coin in with a hook shot.

Google searches suggest that these people are not alone. The same two verbs, “throwing” and “tossing,” account for almost all the results under searches for the phrase “[verb] + ‘coins in a fountain’”: 5,360 for “throwing” and 2,590 for “tossing.” Alternative verbs, such as “dropping” or “chucking,” got fewer than 10 results, and verbs like “pitching,” “depositing,” and “lobbing” didn’t get any. This remarkable consistency, in throwing motions and words used to describe them, indicates that the merging of our individuality into a social collective begins even before we see the coins resting together in the fountain.

Of course, most people don’t walk around saying, “Look at all those coins in the fountain…What a great visual metaphor for society!” The resonance, if there is any, usually occurs at a hidden, unconscious level. Throwing a coin in a fountain just feels good and right, like enjoying a movie without having to consciously articulate why it moves you. What starts out as an individual act to attain private wishes ends up being a celebration of nature and community, and the positive feelings created through this act help explain its ongoing appeal all these years after most of us (including Southern Californians) stopped believing in water deities. 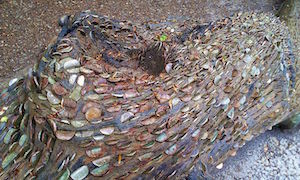 Naturally, there are variations in everything from culture areas to individual personalities. It would be interesting, for example, to investigate whether people in the United Kingdom have traditionally been more prone to throw coins in rivers and wells, where the coins disappear out of sight, because those bodies of water have more religious associations than the typically secular sites used in the United States, such as fountains or ponds in shopping malls and state parks. Conversely, can the rising popularity in the United Kingdom of “coin-trees” be tied to increasing alienation and growing desires to visualize social connections?

Certainly these coins are highly visible, like the coins in American fountains, and archaeologist Ceri Houlbrook’s superb arguments about the participants’ “captivation” by coin patterns that they can’t fully explain dovetail nicely with the above points about awe and collective effervescence.

It would also be worth investigating the way all these coin customs express ambivalence about major forces in modern life: capitalism (after all, the custom consists of throwing away money), government (that discarded money is government property), and science (we’re thumbing our noses at laws of cause and effect by toying with “superstitious” beliefs).

Obviously, there’s a lot of good further research to be done, but one thing is clear: Experiencing awe and community for a penny is a pretty good deal.

This article was originally published on anthropologyworks. Read the original article.