Refugees are forced to flee dangerous conditions and look for a better life. But after they arrive in a new country, how can we ensure that they receive proper care and support? This is an especially pressing question for refugee children, who may have suffered severe trauma and who sometimes arrive in a new land without their parents, not speaking the local language. 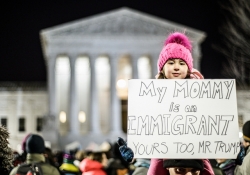 A new study suggests that, to support refugee children, it’s important—and possible—to improve how they’re perceived by the children in their host country. More specifically, the two psychologists leading the study wanted to see if fostering empathy among kids can improve their attitudes and behavior toward refugees.

The study involved 100 8-11 year-old children in Northern Ireland, a territory that is seeing a significant increase in refugees within a culture that has historically lacked ethnic diversity. The researchers told all the children in the study that a new refugee student would soon be joining their school.

However, the researchers broke the children into three groups. Two of the groups heard a story about the personal experiences of an individual refugee, but children in one of the groups were told to focus on the facts of the story while the other group was instructed to think about the feelings of the refugee. Then, the children in the two groups answered questions about themselves, intended to measure their general empathy as well as attitudes toward non-Irish children and refugees as a group. They also answered questions specifically about the fictitious new child that they’d just learned about. How did they feel about the new arrival, having heard their story? Would they welcome the child and help them out at school? The third group served as a control—they were simply informed about the new arrival without hearing a story, right before answering the same survey questions.

There were no differences between the two groups that heard the story: Those children experienced more empathy afterwards, whether they were told to focus on facts or feelings, and they also had higher intentions to help the refugee student once he or she started at school.

But this wasn’t the case for the children in the control group, who didn’t hear the story—they didn’t feel more empathy and they weren’t more likely to help. Across all three groups, students with more positive attitudes toward refugees were more likely to help the new student once they started school.

These findings didn’t support the authors’ hypothesis—that being primed to think about the refugee’s feelings would lead to positive attitudes, which would lead to greater intentions to help. Instead, the empathetic feelings created by the story jumped straight to a desire to help the individual, but did not seem to affect attitudes toward other groups in general.

There were still limits to the willingness to help. While students who heard the story were more likely to want to help a refugee student during school hours, they were no more likely to want to help that student after school. The researchers suggest that interventions to support refugees could benefit from “explicitly trying to lower the ‘costs’ of helping incoming refugees.”

Even so, the study highlighted how important it is that children—and probably adults, as well—hear refugee stories. Consistent with many other studies, this one also once again revealed the links between empathy, attitudes, and a willingness to help. It seems that creating feelings of empathy, specifically through telling stories about the experiences of refugees, can create more of a desire to help them in the future.