Children begin telling stories as young as age two or three. And they continue to develop storytelling skills in their interaction with parents and others who provide guidance and feedback.

The ability to tell a coherent and well-developed narrative may be important for children’s literacy development. However, most of the studies on children’s storytelling and reading skills have been conducted with samples of middle-class white children.

To address this gap in the research, my colleague Iheoma Iruka and I studied data of children from different socioeconomic and racial/ethnic groups from across the United States.

What we found surprised us. 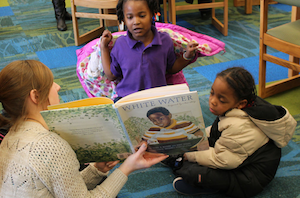 For our research, we used national data from the Early Childhood Longitudinal Study, a study of about 14,000 children born in the United States in 2001, that examined their development, school readiness, and early school experiences. We focused on 6,150 children who were identified as African-American, Asian-American, Latino, and European American.

To understand the role that storytelling skills play in the link between language and early literacy, we used data from when children were two years old until they were five years old.

When the children were two years old, parents were asked to describe their children’s language abilities. Later, when children were four years old, their storytelling skills were measured by asking them to retell stories they had just heard a researcher tell them. At five years old, children were given an assessment of their early literacy.

For most racial/ethnic and socioeconomic groups of children, we found that children who had better language skills as toddlers did better on the literacy assessment when they were five years old.

But when we looked at how storytelling plays a role between early language and early literacy, we found that when it came to African-American children, it made a big difference. For these children, the higher their storytelling scores, the better they did on the early literacy assessment. Interestingly, it didn’t make a difference for the other groups.

What this study tells us

The strong storytelling skills of African-American children may stem from the cultural and historic influences that have fostered a preference for orality among African Americans.

So, why are African-American children not performing better in reading? More research is needed, but possible explanations suggest that the low-quality schools many of these kids go to end up having a negative impact on their reading skills. In addition, many of these kids may have language skills that differ from those expected at school.

Why does storytelling matter?

For most other kids, studies suggest that storytelling skills may show their influence when children are older.

As children tell stories, they gain practice in using the same type of language that is used in written text, which can help them as they learn to read.

So, what can teachers and parents do?

Many schools have a “show-and-tell” time that can allow children a chance to practice storytelling skills as they share information about a valued object. As teachers and peers ask questions, they can facilitate children’s storytelling skills.

Parents and teachers can also model storytelling for children by sharing their own experiences, in the form of a story that has a clear beginning, middle, and end, and addresses the questions of who, what, where, when, and why. Using props like wordless books, puppets, dolls, and photographs may also help children in developing stories.

While learning to tell stories can be useful for all children, this skill may be most needed for those at risk of achieving reading competency.