When I was a young kid, I remember taking an IQ test with a school counselor. The first question posed to me was, “What is an orange?” I knew the answer! “It’s a color,” I said.

Wrong. I remember how flustered I was hearing I got it wrong. Luckily, the tester coaxed the “right” answer out of me, and I recovered enough to finish the test. But that brief panic still haunts me, making me wonder how close I was to “flunking” the IQ test and being defined for the rest of my life. 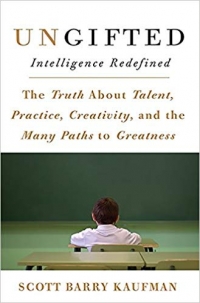 So, it’s with some interest that I read Scott Barry Kaufman’s new book, Ungifted: Intelligence Redefined. Kaufman, a cognitive psychologist at New York University, writes about the fallibility of IQ, SAT, and other intelligence tests, while outlining the research that shows what other factors are important in academic success and life.

Kaufman has an axe to grind: He was placed in a special education class at a young age himself, and had to fight his way out of the labels and expectations placed on his intelligence. Luckily for him, he persevered, overcoming obstacles and ending up doing his PhD at Yale, where he studied cognition and intelligence with some of the premier researchers in the field.

With a firm grasp on the genetic, psychological, and neuroscience research on intelligence, Kaufman paints a complex picture of what goes into cognitive ability besides SAT and IQ scores. Individual traits, like grit, passion, and perseverance, as well as environmental factors, like mentoring opportunities and welcoming learning environments, make a huge contribution to a child’s ability to learn—so much so, that Kaufman argues we shouldn’t rely on intelligence tests at all.

“Stereotyping students with disabilities on the basis of a disability label or standardized test score is not only unsupported by the best evidence from the field of psychology and education measurement, but it’s also just plain discrimination,” he writes.

He argues that even students from educationally disadvantaged backgrounds can become “gifted” if given the right encouragement. One intervention in North Carolina schools called Project Bright IDEA, which targets disadvantaged students, found that when teachers were trained on how to encourage “gifted” behaviors—like persisting, listening with empathy, flexible thinking, and questioning—in their students, those students’ performance went way up. In fact, 24 percent of the students who received this special instruction moved into gifted and talented programs, and even those that weren’t scored 50-100 percent higher on academic assignments than their peers in regular classrooms.

Outcomes like this show that parents and teachers need to consider kids’ unique gifts and nurture those with appropriate challenges and encouragement. Kaufman argues for the elimination of competitive evaluations, suggesting instead a system of cooperative learning, where kids are valued for what they can do, rather than getting the best grade.

Though genetics play a role (which, he argues, they do for all traits), environmental influences are much more prominent than we may think. He presents research on how teacher expectations and cultural stereotypes—like “girls can’t do math”—shape the way teachers teach and evaluate their students, while also affecting student performance.

In fact, the book is chock full or research, punctuated by Kaufman’s own story of overcoming the odds. His book gives credence to the view that cookie-cutter approaches to education will miss the special gifts each child brings into the world. Whether kids have high IQs, special needs, schizophrenia, or ADHD, each child is capable of learning and may hold the key to solving difficult problems or creating the next masterpiece of art…if we only give them a chance.

“People with all different kinds of minds are capable of accomplishing extraordinary things in their own way,” writes Kaufman. “Surely we can value the talents of student identified by a single testing session while still giving less stellar and even poor performers multiple bites at the apple.”