Three 12-year-olds are heading to a soccer field for gym class. 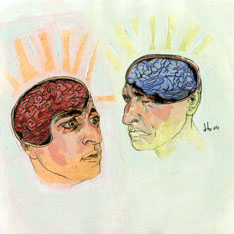 “So you’re going to try to play soccer,” one of the two says sarcastically to the third, his voice dripping with contempt. The chubby boy closes his eyes for a moment and takes a deep breath. Then he turns to the other two and replies, in a calm, matter-of-fact voice, “Yeah, I’m going to try—but I’m not very good at it.”

After a pause, he adds, “But I’m great at art—show me anything, and I can draw it real good…”

Then, pointing to his antagonist, he says, “Now you—you’re great at soccer— really fantastic! I’d like to be that good someday, but I’m just not. Maybe I can get a little better at it if I keep trying.” At that, the first boy, his disdain now utterly disarmed, says in a friendly tone, “Well, you’re not really that bad. Maybe I can show you a few things about how to play.”

That short interaction offers a masterly display of “social intelligence.” By keeping cool, the aspiring artist resisted the pull to anger from the other’s sarcastic taunt and instead brought the other boy into his own more friendly emotional range.

“Social intelligence shows itself abundantly in the nursery, on the playground, in barracks and factories and salesrooms, but it eludes the formal standardized conditions of the testing laboratory.” So observed Edward Thorndike, the Columbia University psychologist who first proposed the concept, in a 1920 article in Harper’s Monthly Magazine. Thorndike noted that such interpersonal effectiveness was of vital importance for success in many fields, particularly leadership. “The best mechanic in a factory,” he wrote, “may fail as a foreman for lack of social intelligence.”

Now, almost a century later, “social intelligence” has become ripe for rethinking as neuroscience begins to map the brain areas that regulate interpersonal dynamics. Psychologists argue about which human abilities are social and which are emotional. Small wonder: The two domains intermingle, just as the brain’s social real estate overlaps with its emotional centers. In my book Emotional Intelligence, I folded social intelligence into my model of emotional intelligence without making much of that fact, as have other theorists in the field. But as I’ve come to see, simply lumping social intelligence within the emotional sort stunts fresh thinking about the human aptitude for relationship, ignoring what transpires as we interact. This myopia leaves the “social” part out of intelligence. The ingredients of social intelligence as I see it can be organized into two broad categories: social awareness, what we sense about others—and social facility, what we then do with that awareness.

But simply sensing how another feels, or knowing what they think or intend, does not guarantee fruitful interactions. Social facility builds on social awareness to allow smooth, effective interactions. The spectrum of social facility includes self-presentation, influence, concern, and synchrony (interacting smoothly at the nonverbal level).

By “low-road,” I mean the neural circuitry that operates beneath our awareness, automatically and effortlessly, with immense speed. When we are captivated by an attractive face, we have the low road to thank.

The “high road,” in contrast, runs through neural systems that work more methodically and step by step, with deliberate effort. We are aware of the high road, and it gives us at least some control over our inner life, which the low road denies us. As we ponder ways to approach that attractive person, we take the high road.

Conventional ideas of social intelligence have too often focused on high-road talents like social knowledge, or the capacity for extracting the rules, protocols, and norms that guide appropriate behavior in a given social setting. Although this cognitive approach has served well in linguistics and in artificial intelligence, it meets its limits when applied to human relationships. It neglects essential noncognitive abilities like primal empathy and synchrony, and it ignores capacities like concern. A purely cognitive perspective slights the essential brain-to-brain social glue that builds the foundation for any interaction. The full spectrum of social intelligence abilities embraces both high- and low-road aptitudes that have been key to human survival.

Back in the 1920s, when Thorndike originally proposed measuring social intelligence, next to nothing was known about the neural basis of IQ, let alone about interpersonal skill. Now social neuroscience challenges intelligence theorists to find a definition for our interpersonal abilities that encompasses the talents of the low road— including capacities for getting in synch, for attuned listening, and for empathic concern. Without them the concept remains cold and dry, valuing a calculating intellect but ignoring the virtues of a warm heart.