Model Cameron Russell’s TED talk has been viewed more than two million times over the past few months. With candor and directness, Russell draws on her own experiences as a highly successful model to expose modern manifestations of racism and sexism, where physical appearance dictates who gets seen and heard in the mass media, and how they’re perceived. 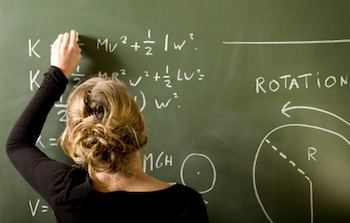 Russell’s talk immediately brought to mind this video, in which a pageant contestant (Caitlin Upton) messes up a question about maps. I sometimes show this video to my class on prejudice and discrimination, and the response is invariably the same: Everyone shares a hearty, unconcealed laugh. Why? In brief, people laugh at the very incarnation of “dumb blonde” before them. The fact that this clip got several million views in three days attests to how widely shared our collective recognition was.

This is a real teachable moment in my class, because it enables a discussion about how many of us have strong values against being prejudiced and using stereotypes, yet continue to laugh and look down on others based on little information aside from the way they look. Cameron Russell, like Caitlin Upton, are arguably both “winners of a genetic lottery” that gave them beauty and good looks. Part of Ms. Russell’s point in her TED talk was to help us humanize her by sharing her struggles and insecurities, and, critically, by openly recognizing that she’s been “cashing out” on a cultural legacy that prizes angular features and white skin.

What I want to focus on here is the simple notion that even though Ms. Russell explicitly contrasts her privileged position against that of people who have not won a lottery by virtue of having darker skin, it’s not all a story of contrasts. Rather, the experience and consequences of being subjected to a stereotype of low intellectual ability—be it because one is blonde or one is black—are remarkably similar across these different stereotypes.

Right around minute 5:30, Ms. Russell intimates that “if you say you want to be president of the United States, but your resume says, ‘underwear model, 10 years’, people give you a funny look.” The reality is that the barriers to being taken seriously in the business or political world go way beyond funny looks. The specific stereotype that is applicable to both Cameron Russell and Caitlin Upton is that if you’re beautiful, your head is simply empty, and that stereotype can be devastating for anyone trying to disconfirm the stereotype and get that high-powered position. We use videos like the one of Caitlin Upton as evidence of the truth in these stereotypes—look, the evidence is staring us in the eye!—yet we fail to notice how our own behavior and streotypes actually confirm the very behaviors we expect in others.

But how can being beautiful prevent anyone from becoming a ninja cardio-thoracic surgeon poet? And how do our stereotypes affect the behavior of others?

The classic studies on this topic were published in 1995 by Claude Steele and Joshua Aronson, who showed that when people are thinking about how they might be confirming a stereotype of inability, it serves as a distraction and brings about the very underperformance that the person is worried about confirming—a phenomenon known as “stereotype threat.”

In one study, for example, African-American and white students at Stanford University were presented with identical tests, except that half of them were told that the test was diagnostic of their abilities and half of them were told that that the researchers were simply interested in understanding the questions themselves (rather than the test takers). Hundreds of studies have confirmed the fact that when one is stereotyped as having low ability, tests that purport to diagnose this ability put a person under the added stress (on top of taking a test!) of being evaluated in light of this neative stereotype.

The result—ironically—is a greater likelihood that one underperforms, giving rise to the very outcome that one longs to prevent in the first place. Notably, without this stress of a “diagnostic test” hanging over them, the African-American students answered the same questions as well as their white peers (A well-written, accessible entry into this phenomenon of stereotype threat can be found in Steele’s book, Whistling Vivaldi: How Stereotypes Affect Us and What We Can Do.)

It’s amazing how even students in my stigma and prejudice class have a hard time seeing how stereotype threat might have accounted for Caitlin Upton’s infamous pageant moment. First, imagine yourself answering—spontaneously—a question in front of a live audience and video cameras. That’s by itself nerve-wracking. But on top of that, the threat of knowing that a large portion of that audience will automatically think “dumb blonde” if you mess up is all the more likely to make you, well, mess up. And rather than responding empathically, people were merciless toward Caitlin Upton.

Cameron Russell was successful, I think, in getting her audience to respond with empathy, to respond to her as a person rather than a fashion model. But while it’s important to recognize, as Ms. Russell does, that she has benefitted from her looks, it is also important to note that the legacy of negative stereotypes—be they “beautiful and brainless” or “black and criminal”—cuts across identities, and reduces any person from being a whole human being to simply being a member of a category. Ms. Russell gave us the opportunity to pause and reflect on her entire self; let’s give ourselves pause and consider how other people are not just the stereotypes we sometimes make them out to be.