In the field of psychology, there is a new, tsunami-like wave of interest in the use of psychedelic drugs as a compliment to traditional therapy, with new studies published weekly and research centers opening worldwide. This energy is picking up where research left off prior to policy changes in the 1970s, before which psychedelics had been intensively studied for the treatment of depression and substance use, and for exploring creativity and human potential. 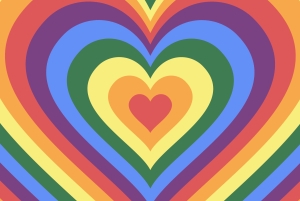 In the early 2000s, shifts in policy allowed a slow reemergence of studies in psychedelic research across the world. Most of this research has focused on how substances impact the brain and the treatment of mental disorders such as post-traumatic stress disorder (PTSD) and end-of-life distress.

Among the renewed interest is a 2022 paper in Perspectives on Psychological Science, where researcher Sonja Lyubomirsky calls for new social psychological research on psychedelics to help us more deeply understand the essence of social connectedness, and create programs using psychedelics that can directly improve people’s lives.

Lyubomirsky, professor of psychology at the University of California, Riverside, is most passionate about studying 3,4-Methyl​enedioxy​methamphetamine (MDMA), otherwise known as ecstasy, which is a chemically created compound developed in a laboratory. MDMA is not a classic psychedelic and doesn’t include hallucinations or perceptual distortions (in other words, no thinking the walls are dripping or a flower is talking to you). MDMA is often referred to not as a psychedelic but as an empathogen, which increases feelings of empathy and benevolence toward others, as well as feelings of being socially accepted and connected.

In clinical research, MDMA is used as a tool that capitalizes on the feelings of increased empathy to allow an enhanced therapy session between the clinician and participant to work through psychological challenges that arise while the client is in a more open, receptive, trusting state. In contrast, the psychedelic psilocybin, or magic mushrooms, is used in research in a much more self-focused context, where the participant puts on an eyeshade and focuses their attention inward to encourage deep self-reflection, only engaging in dialogue after the session is over.

MDMA and psilocybin are both Schedule I substances, which are not legal in the U.S. and have historically been considered substances with no medicinal use and high potential for abuse. Contemporary research is challenging this classification, finding that MDMA has a low (but nonzero) potential for abuse and promising potential for therapeutic benefit with PTSD.

We sat down with Lyubomirsky to talk about what researchers might learn from studying psychedelics and what some of the barriers are to this kind of work.

Eve Ekman: Many of our readers will know your foundational work on happiness. Can you describe the relationship between happiness, social connection, and MDMA?

Sonja Lyubomirsky: Most people may be surprised to know that although social connection is a critical ingredient in our happiness and well-being, we don’t quite know how to durably foster it. MDMA may help us understand more about how to facilitate interventions that sustain social connection.

EE: That is surprising. On our Greater Good in Action site, for example, we have dozens of practices to support social connection, gratitude, and more, some of which came from your work. 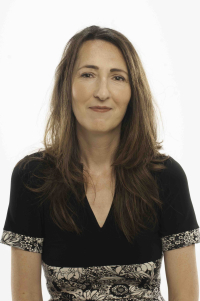 SL: These exercises do work, but in the experimental research, the effect sizes are small. After decades of study, we still aren’t totally clear on the developmental and neurobiological roots of social connection, and we don’t have many tools that can effectively boost a feeling of social connection in people’s daily lives over time.

In contrast, both clinical research on MDMA and anecdotal evidence suggest that there are huge, enduring improvements in feelings of connection after just one MDMA session, and we want to know why. MDMA is a perfect compound to study the immediate mechanisms (during the treatment session) and the long-term mechanisms underlying the process of creating and sustaining social connection.

In other words, because there is so much we still don’t know about the key ingredients of what makes interventions to support connection work and last, we stand to learn a lot from research using substances like MDMA.

For example, we may be able to understand what helps people build social connection in the moment; maybe we discover that experiencing eye contact or more self-compassion are what MDMA facilitates well, and then we can focus on those features in developing non-MDMA interventions. Further, we know self-disclosure is so important for feelings of connection; possibly that is something we can learn more about from MDMA research.

SL: The great work done across the many years of clinical trials using MDMA has involved quite a few hours of individualized psychotherapy. In contrast, the laboratory experimental work has involved creating controlled individual experiences. For example, the experimental studies may aim to assess social connection but do so with participants sitting alone in front of a computer, where they are asked, “How friendly do you feel?” or “Do you like this face or not?” This approach does not create opportunities to study real-time social engagement. By contrast, the clinical studies aim to apply their findings to therapist-client situations as opposed to naturalistic daily behavior, such as conversations with family or friends.

What I am proposing is to study social connection experienced by two people who have consumed MDMA and are engaged in a social interaction. This approach aims to build a bridge between the basic experimental science of what might be happening in the brain or body and the applied clinical science of how to create interventions that support the process of social connection.

In my Perspectives paper, I propose a conceptual model for how MDMA may work in supporting social connection, drawing on contemporary MDMA research. 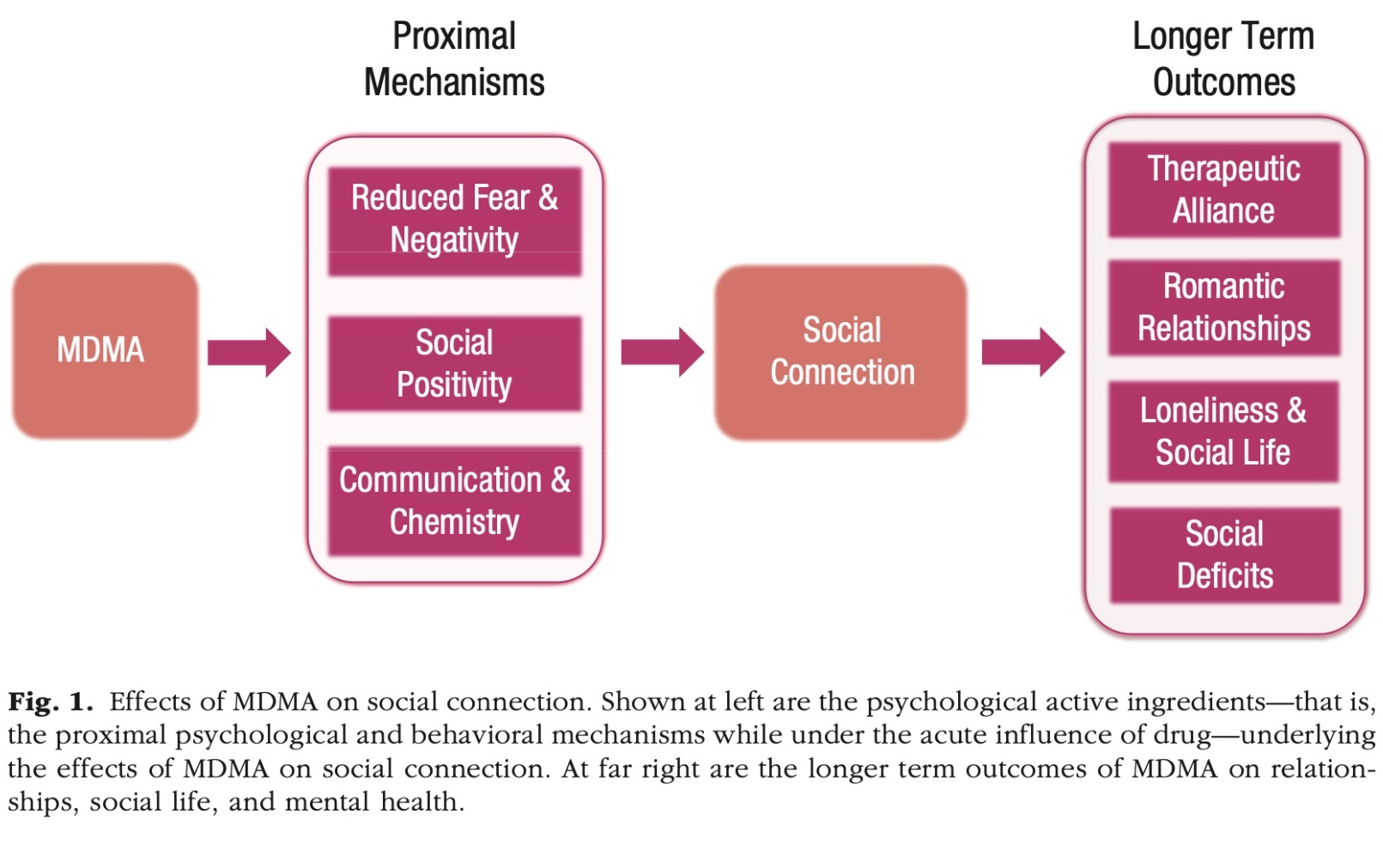 First, there are the proximal outcomes that can be observed during an MDMA session, which include lowered fear, increased sociability, and more chemistry. This experience creates a meaningful foundation of social connection and one that may contribute to the longer-term benefits. The potential long-term impacts from one or more MDMA sessions include improved relationships, reduced loneliness, and stronger therapeutic alliances.

EE: Let’s talk more about loneliness. It feels like the other modern pandemic which many of us are facing and which we know is a global issue of mental health and well-being. How might MDMA help in understanding and working with this pandemic of loneliness?

SL: I once spoke to a clinician who called the DSM (the Diagnostic and Statistical Manual of Mental Disorders, which is used by therapists to identify and treat mental health conditions) as representing “loneliness in its many forms.” Indeed, there are social deficits present in almost all or all major mental health diagnoses, which of course impede meaningful social connection. And still we are really struggling to understand how to effectively and durably reduce loneliness. MDMA might help us understand what is needed to address such social deficits.

EE: Can you help us understand what a study to examine this might look like with MDMA?

SL: I can’t share the results yet, but my lab and collaborators with expertise in psychedelic research, led by Harriet de Wit at the University of Chicago, developed a study to look at how strangers can connect after consuming MDMA. In the study, we gave MDMA to two people who don’t know each other and asked them to have a conversation. As a prompt, we used an adapted version of the [36 Questions for Increasing Closeness] in which the participants are increasingly learning more about each other. In this study, we compared MDMA with placebo and with methamphetamine and assessed such outcomes as closeness, gratitude, self-compassion, trust, and warmth. These variables have rarely if ever been looked at in prior MDMA experimental studies.

I am also eager to start thinking about and designing studies to investigate how MDMA can help couples face and overcome conflicts by boosting empathy and connection and reducing fear and defensiveness.

EE: We are eager for those results! And the couples work sounds very promising. How will MDMA, and other psychedelics, overcome the public stigma and legal barriers to studying and prescribing these treatments?

SL: There is a lot of work currently going on at the research and policy level to demonstrate the safety and psychological benefits of MDMA, as well as substances like psilocybin. Doing research with these substances is very, very challenging; you need various government approvals, which take years, and a lot of private resources to fund.

Also, there is judgment and racism that comes into play when considering the types of drugs that are studied—for example, methamphetamine and PCP are viewed much more negatively and less deserving of empirical study than is MDMA.

Interestingly, President Biden was part of prior efforts to curb the use of MDMA as a party drug. He helped spearhead into effect the RAVE (Reducing Americans’ Vulnerability to Ecstasy) Act, requiring the incarceration of nightclub owners if MDMA is found to be used there. However, it is important to understand that just because MDMA is used recreationally (e.g., at dance parties or at festivals like Burning Man) doesn’t mean it isn’t beneficial therapeutically.

It appears to me that there is disagreement in the field about MDMA’s potential risks and the extent to which such risks should be communicated to the public. In the recent conceptual paper I published, one reviewer said I should talk more about the harms of MDMA, but another reviewer said I should take all the discussion of harm out completely because there is so little evidence for harm.

However, there are potential harms of using MDMA in therapy or research that we should consider. As one example, the participant or client may be unable to replicate the feelings of connection outside the therapeutic or laboratory experience; thus, the participant may feel worse for having felt this incredible sense of connection but not being able to sustain or recreate it. Another potential concern is that one could imagine the openness and empathy felt on MDMA may make someone feel more open to hate groups or to ideas that are harmful. There is also concern that there may be serotonin depletion after a session, and many are trying to figure out how to address this.