Soldiers who return home in casts and caskets are not the only ones struck down by the trauma of war. Many young military men and women carry emotional wounds far beyond the battlefield in the form of post-traumatic stress disorder (PTSD). This psychologically crippling condition cannot be treated with bandages or surgery, and often lasts for years on end.

But new research has now demonstrated that mindfulness—a non-judgmental awareness of our thoughts and feelings—might be a useful tool for veterans battling PTSD. Rather than being stuck in disturbing memories and negative thoughts, they can use mindfulness to actively shift their attention out of ruminations and produce lasting changes in the brain. 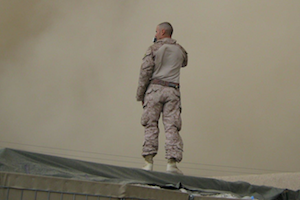 “PTSD is really a different way of seeing the world, and is also seen at the level of physiology,” says Tony King, an assistant professor of psychiatry at the University of Michigan. “But by going through a couple of months of making an effort to change thoughts and behaviors, that physiological syndrome can also change back again.”

Historically, the most effective treatment for PTSD has been trauma-focused therapy, which pushes individuals to directly confront their disturbing memories and recognize that they are no longer dangerous. This approach, however, can be extremely challenging, and some patients are unable to endure it.

“We wanted to have a Plan B—a therapy that could be available for people who thought they weren’t ready or weren’t willing to do trauma-focused therapy,” says King.

His solution, called mindfulness-based exposure therapy, combines mindfulness techniques such as body scan, attention to breathing, and self-compassion with themes from PTSD group behavior therapy. And though the therapy intentionally avoids any direct confrontation with traumatic memories, it encourages patients to overcome their anxiety in situations that are objectively safe but that they avoid due to their condition (such as sitting with their back to the door or driving under an overpass).

To test the effectiveness of this technique, the research team recruited veterans of the wars in Iraq and Afghanistan who had been diagnosed with PTSD and measured their brain activity while at rest. Compared to individuals without PTSD, their brains showed less activity in a collection of areas called the “default mode network,” which is associated with daydreaming, and more activity in regions that regulate fear and other emotions. This was not surprising, says King, as PTSD patients are less likely to let their minds wander in order to stay more attentive to potential threats in the environment.

Subjects were then split into two groups—one receiving the mindfulness-based exposure therapy and the other receiving a standard control group therapy.

After 16 weeks, patients who had undergone the mindfulness therapy showed reduced PTSD symptoms, though these positive changes were not significantly better than the control group’s. But when their brain activity was measured, only those who had engaged in regular mindfulness training showed increased connections between the default mode network and the dorsolateral prefrontal cortex, an area responsible for attention and the ability to consciously shift attention from one thing to another. The strength of these connections in veterans who had received mindfulness training was directly associated with the degree of improvement in their PTSD symptoms.

“This type of attention training may help patients notice when they are stuck in a negative pattern of thought or rumination and make it a little easier to shift their attention to other things,” says King. “And if you think about what mindfulness meditation is, that makes perfect sense. The ‘muscle’ that you are training is the ability to catch yourself when you are not thinking about your breath and move it to something else.”

Interestingly, these changes in brain structure are also seen in one other group of people: meditators who have been practicing for more than 20 years.

“This could be a general effect of mindfulness training,” says King. “Whether it is for 4 months or for 20 years, there seems to be a change in the phenomenology of how people experience being at rest.”

Despite these encouraging results, King believes that mindfulness practice alone is not sufficient to treat PTSD.

“While we do think that mindfulness training can help, remember that this was done with two trained therapists in a veterans’ PTSD clinic,” he says. “I would not recommend someone with PTSD to join the local meditation club because it can be triggering.” Indeed, resting quietly unsupervised during meditation can prompt disturbing memories through a phenomenon called “relaxation-induced anxiety.”

In future studies, King and his team hope to replicate these findings with a larger group of participants, identify which components of their therapy are most effective in producing improvements, and use mindfulness training to help more people successfully engage in trauma-focused therapy.

“The memories are so painful that many live their life trying to avoid triggers,” says King. “The problem is that the triggers are everywhere.” But the development of better mindfulness skills “might allow patients to be fully present and lean into these scary or avoided situations.”