How can the partisan divide be bridged when conservatives and liberals consume the same political content, yet interpret it through their own biased lens? 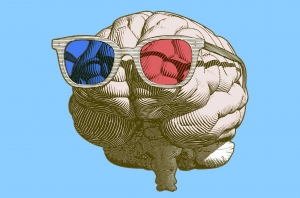 Researchers from UC Berkeley, Stanford University, and Johns Hopkins University scanned the brains of more than three dozen politically left- and right-leaning adults as they viewed short videos involving hot-button immigration policies, such as the building of the U.S.-Mexico border wall, and the granting of protections for undocumented immigrants under the federal Deferred Action for Childhood Arrivals (DACA) program.

Their findings, published in the Proceedings of the National Academy of Sciences, show that liberals and conservatives respond differently to the same videos, especially when the content being viewed contains vocabulary that frequently pops up in political campaign messaging.

“Our study suggests that there is a neural basis to partisan biases, and some language especially drives polarization,” said study lead author Yuan Chang Leong, a postdoctoral scholar in cognitive neuroscience at UC Berkeley. “In particular, the greatest differences in neural activity across ideology occurred when people heard messages that highlight threat, morality, and emotions.”

Overall, the results offer a never-before-seen glimpse into the partisan brain in the weeks leading up to what is arguably the most consequential U.S. presidential election in modern history. They underscore that multiple factors, including personal experiences and the news media, contribute to what the researchers call “neural polarization.”

“Even when presented with the same exact content, people can respond very differently, which can contribute to continued division,” said study senior author Jamil Zaki, a professor of psychology at Stanford University. “Critically, these differences do not imply that people are hardwired to disagree. Our experiences, and the media we consume, likely contribute to neural polarization.”

Specifically, the study traces the source of neural polarization to a higher-order brain region known as the dorsomedial prefrontal cortex, which is believed to track and make sense of narratives, among other functions. 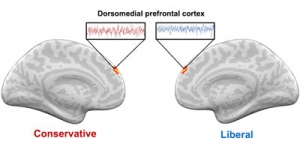 Another key finding is that the closer the brain activity of a study participant resembles that of the “average liberal” or the “average conservative,” as modeled in the study, the more likely it is that the participant, after watching the videos, will adopt that particular group’s position.

Leong and fellow researchers launched the study with a couple of theories about how people with different ideological biases would differ in the way they process political information. They hypothesized that if sensory information, like sounds and visual imagery, drove polarization, they would observe differences in brain activity in the visual and auditory cortices.

However, if the narrative storytelling aspects of the political information people absorbed in the videos drove them apart ideologically, the researchers expected to see those disparities also revealed in higher-order brain regions, such as the prefrontal cortex. And that theory panned out.

Your brain on politics

To establish that attitudes toward hardline immigration policies predicted both conservative and liberal biases, the researchers first tested questions out on 300 people who identified, to varying degrees, as liberal, moderate, or conservative.

They then recruited 38 young and middle-aged men and women with similar socioeconomic backgrounds and education levels who had rated their opposition or support for controversial immigration policies, such as those that led to the U.S.-Mexico border wall, DACA protections for undocumented immigrants, the ban on refugees from majority-Muslim countries coming to the U.S., and the cutting of federal funding to sanctuary cities.

After each video, the participants rated on a scale of one to five how much they agreed with the general message of the video, the credibility of the information presented, and the extent to which the video made them likely to change their position and to support the policy in question.

To calculate group brain responses to the videos, the researchers used a measure known as inter-subject correlation, which can be used to measure how similarly two brains respond to the same message.

Their results showed a high shared response across the group in the auditory and visual cortices, regardless of the participants’ political attitudes. However, neural responses diverged along partisan lines in the dorsomedial prefrontal cortex, where semantic information, or word meanings, are processed.

Next, the researchers drilled down further to learn what specific words were driving neural polarization. To do this, they edited the videos into 87 shorter segments and placed the words in the segments into one of 50 categories. Those categories included words related to morality, emotions, threat, and religion.

The researchers found that the use of words related to risk and threat, and to morality and emotions, led to greater polarization in the study participants’ neural responses.

An example of a risk-related statement was, “I think it’s very dangerous, because what we want is cooperation amongst the cities and the federal government to ensure that we have safety in our communities, and to ensure that our citizens are protected.”

Meanwhile, an example of a moral-emotional statement was, “What are the fundamental ethical principles that are the basis of our society? Do no harm, and be compassionate, and this federal policy violates both of these principles.”

Overall, the research study’s results suggest that political messages that use threat-related and moral-emotional language drive partisans to interpret the same message in opposite ways, contributing to increasing polarization, Leong said.

Going forward, Leong hopes to use neuroimaging to build more precise models of how political content is interpreted and to inform interventions aimed at narrowing the divide between conservatives and liberals.