After years of declining participation in politics, young people are registering to vote—and even voting!—in greater numbers in the United States. What gives? 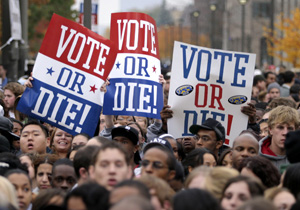 Several thousand people attend a "Vote or Die" rally in Detroit shortly before the 2004 presidential election. The "Vote or Die" campaign, founded by Sean "Puffy" Combs, is credited with helping to create record levels of voter turnout among African-American youth in that election. © Bill Pugliano/Getty Images

Indeed, more and more studies are revealing that it is altruism and partisanship, not benefits we receive as individuals, which predicts whether people will vote. And yet many academics and journalists still argue that reason, not emotion, is what should triumph in the voting booth. Is this really the best way to vote?

George Mason University economist Bryan Caplan certainly thinks so. In his misguided new book The Myth of the Rational Voter, Caplan dismisses passion and patriotism in favor of a purely “rational” approach to voting, with “rational” being a code word for following the path to higher profits

But another recent book reveals the folly of Caplan’s approach. In The Political Brain, Emory University clinical psychologist Drew Westen argues that splitting reason from emotion is simple minded. In fact, human beings have evolved so that both reason and emotion are necessary to making good decisions. Instead of trying to turn our emotions off, he argues, we should listen to what they have to say.

Myth of the rational economist

In 2004, 70 percent of eligible 18- to 29- year olds registered to vote—the highest level in 30 years. What’s more, young African Americans now have the highest registration rates of all: 74 percent, versus 72 percent of white and 57 percent of Latino young people.

To some, this is actually bad news. In The Myth of the Rational Voter, Caplan presents the case against having more voters and more democracy. “Voters are irrational, and emotion and ideology—not just the facts—powerfully sway human judgment,” he writes. He is upset, for instance, that so many Americans embrace protectionist economic policies, against the advice of rational economists like himself. In his view, public policies that do not support corporate profits are just foolish.

For Caplan, messy human emotions make democracy overrated. Instead, he proposes that we should leave decision making to “the market,” which he describes as the embodiment of pure rationalism. Caplan is not interested in the machinery of politics or in analyzing voters as individuals, and he ignores the web of social relationships that shapes our opinions and decisions.

For him, there is expressive voting—that is, voting as a statement of who we are—which he disparages, and then there is fact-based voting. Caplan never asks how the two might interact, or whether the interaction might help voters understand what’s at stake in an election. In the end, The Myth of the Rational Voter simply seems irrelevant to understanding the complexity and outcomes of voting behavior. Its view is just too narrow. 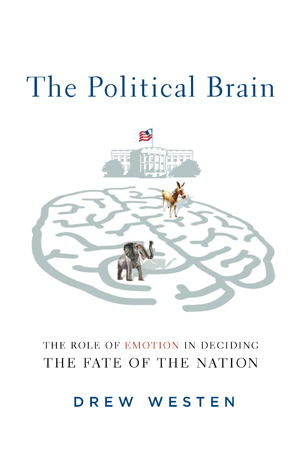 In The Political Brain, psychologist Drew Westen uses the tools of his science to understand political behavior, and thus avoids the trap of so completely splitting reason from emotion.

“The political brain is an emotional brain,” he writes, basing his analysis on the latest psychological experiments into how the mind works. “We do not pay attention to arguments unless they engender our interest, enthusiasm, fear, anger, or contempt.” The ideal of a dispassionate citizen who reads newspapers, stays informed, and weighs the issues is, in Westen’s estimation, only half an ideal.

“Reasonable actions almost always require the integration of thought and emotion,” he writes. This integration is the result of humanity’s long evolution from creatures whose only response was emotional. He explains:

The Democrats, argues Westen, have “an irrational emotional commitment to rationality … that renders them, ironically, impervious to both scientific evidence on how the political mind and brain work and to an accurate diagnosis of why their campaigns repeatedly fail.”

As a result, he says, major candidates for the Democratic Party talk policy but forget to tell stories that appeal to voters’ feelings about an issue. In one devastating example, Westen compares George W. Bush’s aw-shucks delivery to Al Gore’s rationalism.

Here’s how they each responded to a question on Medicare in their first debate during the 2000 presidential race:
Gore: Under the Governor’s plan, if you kept the same fee-for-service that you have now under Medicare, your premiums would go up by between 18 and 47 percent—and that’s the study of the Congressional plan that [Bush has] modeled his proposal on by the Medicare actuaries. …
Bush: I can’t let this go by, the old-style Washington politics, of “We’re going to scare you in the voting booth.” Under my plan, the man gets immediate help with prescription drugs. …

Gore forgets to show that he cares about the people who would get the medicine; meanwhile, Bush says that he wants to give us immediate help. We all know who prevailed in that election, and the next one. Westen has even harsher words for John Kerry’s presidential campaign: In his handling of the Swift Boat affair, what Kerry effectively told the American people was what he would do if America were attacked:

“He would wait an inordinate amount of time until he had gathered enough evidence to establish guilt beyond a reasonable doubt in a court of law, use polls and focus groups to see what kind of response Americans preferred, and then write our enemies a letter imploring them to stop their terrorist acts immediately. Sometimes, the meta-message is the message.”

This is a wonderful way of showing how an intuitive, emotional response can provide insights that a conscious, rational one does not. Westen uses neural pathway studies to show how the brain works in complex, unconscious ways, seeking rational explanations for gut reactions.
“Feeling and thinking evolved together, and nature ‘designed’ them to work together,” he concludes. So the stories political parties tell about themselves—overtly in rational verbal exchanges (the Democrats are the party of inclusion) and covertly in gestures and dress (the Democrats are elitists who can’t talk like regular people)—need to come together for effective political speech.

The Political Brain does have its weaknesses. Westen is not sensitive to the role subcultures (such as the hip-hop community) play in shaping people’s interpretations of mass media or of the stories politicians tell. He has absolutely no interest in how someone’s emotional orientation is created, simply acknowledging that party affiliations and ideologies tend to be passed down through the generations. But how can people feel politically engaged when they feel hopeless? How are people’s “concerns” created in the first place? Why is party identification declining and the pool of independent voters—voters he is enormously concerned about reaching—growing? Westen never grapples with these deeper questions.

For some political scientists and, of course, most economists, it is vexing that people vote at all, because of course everyone knows a single vote can’t change the course of history or even serve narrow self-interest. That those most marginalized from power, like young African Americans, are registering to vote in greater numbers—even as surveys show them quite cynical about those in power—offers us all the chance to rethink stale notions of how and why people mobilize themselves.

For example, in organizing African American youth, the hip-hop community is consciously appealing to emotional identification with a distressed culture as much as the rational need for African Americans to gain more power in American society. Those “irrational” feelings of concern and fear for the future apparently make African American youth more receptive to “rational” political thinking. When rap impresario Sean “Puffy” Combs coined the slogan “vote or die” during his 2003-04 voter mobilization campaign, it created a sense of urgency as well as community that led to record levels of voting among African-American young people. In an era when the language of politicians doesn’t speak to people, the language of music and culture can.

This good news helps illuminate a new pathway for us all, one that embraces both emotion and reason. Today, we are in a new stage in the struggle to free both sides of our minds.

Abby Scher, Ph.D., is a sociologist and the editor of The Public Eye, a quarterly journal that examines right-wing political movements, published by the Massachusetts-based think tank Political Research Associates.

Several thousand people attend a “vote or die” rally in Detroit shortly before the 2004 presidential election. The “vote or die” campaign, founded by Sean “Puffy” Combs, is credited with helping to create record levels of voter turnout among African-American youth in that election.

P. Diddy set an example as an influential rapstar to invite the African-American youth to the voting booth. Too bad this doesn’t happen more often so the voting demographic is spread more even among the population.