A couple of weeks ago, at a speech before a friendly audience, President Donald Trump likened immigrants to poisonous snakes. To biologist and behavioral scientist Robert Sapolsky, it was a revolting but revealing remark. 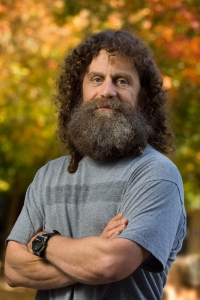 “That’s a textbook dehumanization of ‘them,’ he said. “If you get to the point where citing ‘thems’ causes your followers to activate neurons in the insular cortex—the part of the brain that responds to viscerally disgusting things—you’ve finished most of your to-do list for your genocide.”

That sort of sharply stated, science-based analysis has made Sapolsky a popular and influential writer and thinker. A MacArthur fellow, he is a professor of biology and neurology at Stanford University, and the author of several books, including the 2017 bestseller Behave: The Biology of Humans at Our Best and Worst.

Sapolsky has spent much of his career in Kenya, studying baboons (among other primates), and he uses that knowledge to put human behavior into a broader perspective. In a recent telephone interview, he discussed the biological basis of our current political fault lines.

Tom Jacobs: Let’s talk about tribalism. First of all, is that an accurate term for the sorting into opposing camps that’s going on today?

Robert Sapolsky: Absolutely, in a very primate kind of way. The easiest symbols that we grab on to in deciding if someone is an “us” or a “them” are visceral ones. Being disgusted by someone’s personal behavior—the way “they” do stuff—is a much easier entrée to hating them than disagreeing with their views on the trade deficit.

Primates are hard-wired for us/them dichotomies. Our brains detect them in less than 100 milliseconds. Our views about things are driven by implicit (unconscious) processes. It’s depressing as hell. A hormone like oxytocin makes you nicer to “us” and crappier to “them.” What hormones are good at is magnifying things that are already there. That tells you that “us and them” is a fundamental fault line in our brains.

That’s depressing, but the key thing about us is that we all belong to multiple tribes. Even if we are predisposed into dividing the world into “us” and “them,” it’s incredibly easy to manipulate us as to who is an “us” and who is a “them” at any given moment.

TJ: True, but there’s a lot of research suggesting our various identities are lining up more and more, with liberals and conservatives shopping at different stores, watching different movies and television shows, etc. Isn’t that a dangerous trend?

RS: I agree. The percentage of people who have friends with different political viewpoints is decreasing. The odds of you marrying someone with a different political orientation are also down. I think that reflects the ways in which social media have made this such a polarizing atmosphere.

We do our worst when we’re surrounded by a lot of people who agree with us. For example, devout religious belief is not a predictor of extremism. Devout religious observance isn’t either. But devout religious observance in a group setting is. Studies show that support for terrorism in majority Muslim countries is unrelated to how often you pray, or how devout you are about food prohibitions. But it is related to how often you pray in a mosque. The same is also true of right-wing Jewish extremists in Israel. When sacred values are re-affirmed in groups—that’s when things get scary.

TJ: We’re also seeing the rise of nationalism all around the world, and with that has come an increased tolerance for autocratic leaders. This is often explained as a reaction to globalization: If McDonald’s is everywhere, people feel a threat to their national identity, and they feel a need to affirm it in a strong, even belligerent way. Do you agree?

RS: Globalization has meant people living in places they didn’t used to live in—which means people are living around people they didn’t used to have to live around. In principle, that can be great and heartbreaking—contact with others leads us to realize we’re all siblings under the skin. But we know it does anything but that.

For the book, I looked at the literature on what circumstances set people up for making intergroup tensions worse. It turns out having some of “them” move in down the block is not a great recipe for everyone learning that they’re more similar than different. Rather, it’s a great circumstance for rubbing elbows and getting visceral senses of threat going.

What globalization has done is allowed all sorts of places that are feeling economically and culturally precarious to have local scapegoats—people that look a whole lot different. It would take a lot more work to figure out it’s their fault if they happened to look and eat and pray the same way you do. If all of those things are different, you’re three-quarters of the way home toward getting a scapegoat.

TJ: So if you’re looking for someone to blame, you’ve got somebody right down the street! That wouldn’t have been true in the past.

RS: Scapegoating is an incredibly mammalian thing to do. Why is that? Because it makes you feel better! It’s a horrifyingly effective stress-reduction mechanism.

If you have a rat that has just gotten a shock, one of the best ways to decrease its stress hormones is to make it easy for it to turn around and bite another rat. Roughly 50 percent of baboon aggression is “displacement aggression”—somebody taking out their bad day on somebody smaller. It’s a defining feature of social organisms in pain.

TJ: We write a lot about economic and social inequality, but until I read Behave, it never occurred to me to compare humans with other animals in this respect. You argue that humans have far more inequality than any other species. Any idea why that is? 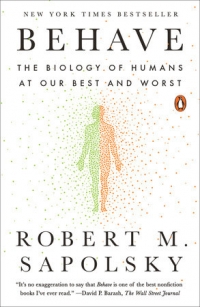 RS: Because of our psychological sophistication. A low-ranking non-human primate may get beat up when somebody is in a bad mood, or get the crummiest place to sit when it’s raining. Or they’ll find something good to eat, and someone (of a higher rank) will take it away from them. But that’s basically it. They don’t have societal constructs that lead them to think it’s their own damn fault.

Humans can be driving down the freeway, and the driver in front of you can signal your lack of socioeconomic success (via their more expensive automobile). Humans can sit at home, watch an episode of Lifestyles of the Rich and Famous, and feel diminished. And all of that plays out in terms of whether your kid gets a decent education, or whether they’ll make it home from school safely.

When you look at the links between low socioeconomic status and poor health in Westernized humans, it has nothing to do with access to health care, and only a tiny amount to do with lifestyle risk factors. It’s the psychological impact of being poor. A person’s subjective socioeconomic status is the best predictor of their health.

In other words, it’s not being poor (that puts your health at risk)—it’s feeling poor. The most reliable way to make somebody feel poor is to rub their nose in it, which can entail everything from not making eye contact to not having the police believe them.

TJ: You write that you don’t really believe in free will, but we nevertheless have an obligation to try to understand our behavior and make things better. Isn’t that something of a contradiction?

RS: I’m realizing how incredibly hard it is to articulate how an absence of free will is compatible with change.

“'Us and them' is a fundamental fault line in our brains”

There are all sorts of neuro-pathways that analyze the world in terms of cause and effect. The knowledge that one person—or a bunch of high school students—really can make a difference can be inspiring. That means certain pathways have been facilitated, and, as a result of that, certain behaviors become more likely. Pathways to efficacy can also be weakened if you find out you have no control in a certain domain. Learning to be helpless is also biological.

TJ: So the fact free will is largely illusory does not mean the way we react to the world is static and unchanging.

RS: Absolutely not. There’s a vast difference between a biologically determined universe and fatalism.

This story originally appeared as “Why We Engage in Tribalism, Nationalism, and Scapegoating” on Pacific Standard, an editorial partner site. Subscribe to the magazine in print and follow Pacific Standard on Twitter to support journalism in the public interest.