It’s a paradox of political psychology that has been perplexing people for decades. Compared to liberals, conservatives—at least in the public sphere—seem to be angrier, more agitated about what our society has become, and more convinced that even greater horrors lie just ahead.

And yet, a series of studies have concluded that right-wingers are happier, overall, than their counterparts on the left. In a 2006 Pew survey of Americans, 47 percent of Republicans reported they were “very happy,” compared to just 28 percent of Democrats.

A new study suggests that statistic, and the others that support it, may be quite misleading. Looking beyond self-reports to more objective indicators of mood, a research team led by psychologist Sean Wojcik of the University of California-Irvine comes to a very different conclusion.

“Self-reports of happiness and life satisfaction ... are susceptible to self-enhancing distortions,” they write in the journal Science. “Our studies found that political liberals exhibited more frequent and intense happiness-related behavior than political conservatives.”

Wojcik and his colleagues describe four studies that all come to that same conclusion. One of them analyzed Twitter messages sent by 1,950 people who “follow” the Democratic party, and 1,996 who “follow” the G.O.P. (A smaller group of users who receive tweets from both parties was excluded from the survey.)

Another study used data from the business-oriented social network LinkedIn. The researchers analyzed profile photos of 457 members—240 employees of liberal organizations (including Planned Parenthood and MSNBC) and 217 employees of conservative companies (including the Fox News Channel and the Family Research Council).

The image of each smiling face was analyzed “to distinguish between genuine and superficial expressions of happiness,” the researchers write. 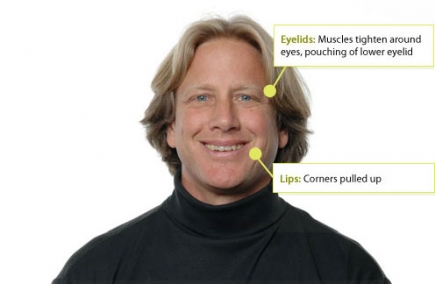 Can you spot true happiness in a person's smile? Take our emotional intelligence quiz!

“Smiles were marginally more intense among employees at ideologically liberal organizations,” they report. “Individuals at conservative organizations expressed significantly less intense facial action in the muscles around the eyes that indicate genuine feelings of happiness.”

OK, some of those fake smiles could have been given by liberals who felt stuck at a hostile, conservative organization (or vice-versa). But an analysis of official photo portraits of members of the 113th United States Congress produced similar results, as “conservatism predicted significantly less intense facial action in the muscles around the eyes.”

What’s more, an analysis of language used by members of both parties in the 2013 Congressional Record found greater conservatism among members “was associated with a small but significant decrease” in the use of emotionally positive words.

Expanding this analysis to 18 years’ worth of Congressional Record data, the researchers found Democrats “used a higher ratio of positive to negative affect words” than their Republican counterparts.

So why would people who insist they’re happy be more likely to use negative words, and display pasted-on smiles? A final study provides a possible answer. More than 1,400 visitors to the website YourMorals.org reported their political ideology and level of happiness.

The researchers found a correlation between participants who scored high on self-deception and those who strongly agreed with such statements as “I don’t care to know what other people really think of me”; “I never regret my decisions”; and “I am a completely rational person.”

In line with previous studies, the researchers found “increasing political conservatism predicted greater reported life satisfaction.” However, they “also found that self-deceptive enhancement was higher among conservatives than liberals.”

Liberals, in other words, were more self-aware, meaning that when they declared they were happy, it was more likely to be genuinely true.

The researchers caution that “it would be a mistake to infer from our data that liberals are ‘objectively’ happier than conservatives.” They note that there is some evidence suggesting that convincing yourself of your own happiness can prove advantageous in both work settings and personal relationships. Plastered-on smiles have their place.

But a disconnect between one’s actual and insisted-upon emotional state surely leads to internal stress, and self-deception tends to eventually crumble, often in painful ways. Remember, Socrates—perhaps the first philosopher to assert that we can, with effort, find genuine happiness—also insisted on the importance of self-knowledge.

Sure, he was famously cheerful, right up to the end of his life. But then, he was a liberal, wasn’t he?

This article originally appeared in Pacific Standard Magazine, which grapples with the nation’s biggest issues by illuminating what shapes human behavior.