There are lots of psychological benefits to gratitude: Feeling grateful to others can lift your mood. It enhances your feeling of connection to other people. Gratitude can also motivate you to do work for others.

When you feel thankful toward another person, you are feeling appreciation that the person has done something for you that required some effort on their part and that was ultimately designed to be helpful to you. When there was no effort or cost to someone’s actions, then you may feel fortunate that there was a positive outcome, but not necessarily grateful to them for engaging in that action. 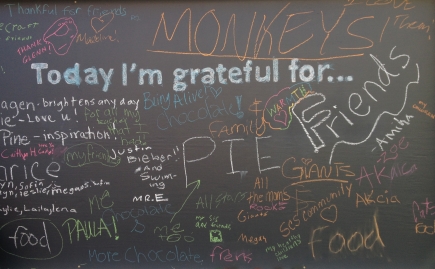 For example, suppose an electric cable comes loose on your car while you’re driving, and you pull over. A driver stops, looks under the hood, and reconnects the wire, allowing you to get home. You are grateful that the driver sacrificed the time to help you. But if the driver had just sped by and caused a vibration in the road that reconnected the cable, then you would feel lucky but not grateful to the driver.

This analysis of gratitude suggests that we need to make some assessment of whether the action of another person came at a cost to them in order to feel grateful. A recent paper in Personality and Social Psychology Bulletin by Michael MacKenzie, Kathleen Vohs, and Roy Baumeister suggests that people’s beliefs in free will may influence the perception of cost, which may in turn affect the feeling of gratitude.

The idea is that if you believe that people have free will, then you believe that the actions they take are intentional. Those intentions reflect that they have explicitly done things to help you, and that increases your sense of gratitude toward them.

Putting all of this together: In order to feel gratitude, you have to believe that the person who has done something for you actually wants to help you. One factor that affects the sense that someone wants to help is whether they have free will. After all, without free will, they are destined to act the way they do.

This research has implications for companies who are performing customer service. If companies want people to feel grateful for the service they get, it is useful for customer service agents to let customers know they have some autonomy in the actions they take. This way, customers will believe that agents have chosen to help them, rather than believing that something about company policy mandated them to be helpful.

Originally published in the blog Ulterior Motives, which explores the interface between motivation and thinking.