Compassion is a powerful moral emotion—it moves us to care for the suffering of others, and enables us to live cooperatively with one another.

Yet we live in a society of constant connection, in which the successes and sorrows of others are brought to us instantly through phones, computers, TV, radio, and newspapers. With that increased connection comes the risk of becoming overwhelmed or overburdened by our emotions. Fearing exhaustion, we turn off our compassion.

But my research suggests we can actually expand our compassion bandwidth without hurting ourselves. As the science of compassion develops, we can find empirically supported ways to cultivate and sustain compassion when it is needed the most.

But when you measure people’s emotional experiences in real time—rather than their predictions—a very different pattern emerges. Rather than feeling more compassion when more people are suffering, people ironically feel less—a phenomenon my colleague Keith Payne and I call “the collapse of compassion.”

People feel more compassion for one than for many. You may find this result surprising. It’s not that adding more victims to a single victim only increases compassion a little bit, in a diminishing emotional return. When faced with many victims, people feel less compassion than they would have if they had just seen one victim. Precisely when compassion is needed most, it is felt the least.

Why does the collapse of compassion occur? Some have argued that we are simply unable to feel much compassion for many victims. But in collaboration with Keith Payne, I developed a different theoretical account and designed a series of experiments to test it.

We find that when there are more suffering victims, people think they will feel more compassion. Given this expectation, people may become concerned about the financial and emotional costs of intense compassion. Compassion for many victims can be seen as an expensive proposition—one that will not make much of a difference. People may also become worried about being overwhelmed or burned out by compassion for many sufferers.

For these reasons, people may actively and strategically turn off their compassion. According to our theory, compassion collapse is not due to a limitation on how much compassion we can feel. Instead, it’s the end result of people actively controlling their emotions.

But why do people shut off sympathy for a large number of victims? In one experiment, I had participants read about either one child refugee or eight child refugees from the war-torn Darfur region of Africa. Half of participants were told that later on in the experiment, they would be asked to donate money toward these victim(s). 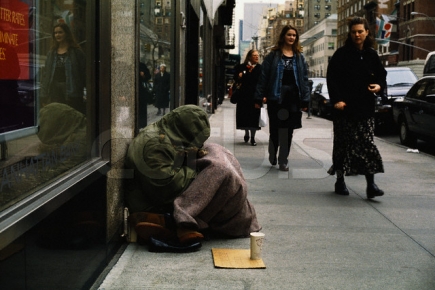 And that’s exactly what I found. When people expected to help, they showed more compassion for one victim than for eight victims. But this reversed when people did not expect to have to help. By showing that the amount of compassion is dependent upon expected costs, the experiment revealed that we don’t face some natural limit to our compassion.

In the next two experiments, I turned from motivation to mechanism: How do people turn off compassion? Even if people are motivated to turn off their compassion, they should only be able to do so if they can skillfully regulate their emotions.

In one experiment, I had people read about one, four, or eight child refugees from Darfur. Everyone thought they would help later, so everyone had the motivation to turn off compassion.

How do we increase compassion?
The upshot of this research is that people can choose whether or not to feel compassion for mass suffering. This choice will depend upon whether people are motivated to avoid compassion and whether they have the skills to regulate their emotions. If we can get people past their fears of being overwhelmed, and teach them strategies for staying with rather than avoiding compassion, then we can increase their compassion bandwidth.

There are many possible short-term strategies for increasing compassion bandwidth. These strategies may be especially effective at changing motivations to avoid compassion:

These findings suggest that we refine our thinking about how to build compassion toward mass suffering. Training people in present-focused attention may increase their ability to savor and sustain compassion for many victims. But training people in how to accept their internal experiences may be a necessary first step, to defuse the fears that hinder compassion from emerging in the first place.

Together, these mindfulness skills may enable people to enhance their compassion bandwidth at a time when we need our compassion to be firing at full speed.

I wonder if what you mean when you say: “whether
they have the skills to regulate their emotions”  is
more akin to emotion suppression, which is a distinct
form of emotion regulation.  I think there are some
important differences between those processes.  An
emotion regulation strategy would be something akin
to cognitive reappraisal or trained, automatic
relaxation responses.

There are many different forms of emotion regulation
that people could use to stifle compassion, including
suppression, cognitive reappraisal, distraction, affect
labeling, and others. People could engage in any of
these strategies to varying levels of skill. Our measure
of emotion regulation skill did not distinguish between
the different specific strategies that people might use,
but that would be a very interesting future research
direction to pursue.

That being said, in the study where we manipulated
emotion regulation, we had people engage in
cognitive reappraisal. This involved instructing people
to think about Darfur victims in such a way that they
didn’t feel anything at all. It’s an open question what
would have happened if we had encouraged other
kinds of emotion regulation. Based upon past studies
of emotion suppression, encouraging emotion
suppression might have actually backfired.