One afternoon in Dublin, I found myself running through the airport, convinced I was about to miss a flight for the first time in my life. 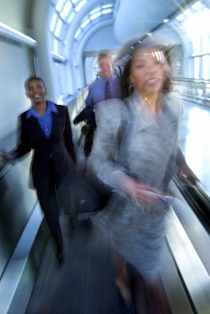 My anxiety surged at the sight of a long security line, but luckily an airport official ushered me to the front. I didn’t care how the waiting passengers felt about my preferential treatment, and I don’t remember much about the people I encountered during that nerve-wracking afternoon. I was thinking only about my goal: to get home.

In short, my empathy for others plummeted as my anxiety mounted—and a recent paper helps explain this phenomenon by linking anxiety to egocentrism. In doing so, it provides yet another reason why cultivating empathy is so crucial.

In a series of six studies with more than 1,300 total participants, researchers from universities including Harvard and Columbia induced anxiety, anger, disgust, surprise, or pride in participants by asking them to write about a past experience when they felt one of those emotions. (Some participants did nothing or wrote about how they typically spend their evenings, generating a neutral feeling.)

Then, participants were tested on perspective taking. In one study, they specified whether a book placed on their right side (but someone else’s left) was on the right or left side of a table. In another, they indicated the position of a green light from their perspective and someone else’s.

In a third, they had to figure out whether the recipient of an email would read it as sincere, when they had privileged information suggesting it was sarcastic. In yet another experiment, they read scenarios like the one below and filled in the blank as quickly as possible:

Anna made lasagna in the blue dish. After Anna left, Ian came home and ate the lasagna. Then he filled the blue dish with spaghetti and replaced it in the fridge. Anna thinks the blue dish contains (lasagna/spaghetti).

In these studies, participants who were feeling anxious or surprised were more likely to give the egocentric answer—or take longer to answer from someone else’s perspective—than those who were feeling angry, disgusted, proud, or neutral. In other words, the stressed people had trouble seeing things from another’s point of view: I know the blue dish contains spaghetti, so Anna must know, too. And the more anxious they were, the more egocentric they became. (On questions that didn’t involve perspective taking, they didn’t perform any worse than the other participants.)

The finding that anxiety and surprise increased egocentrism was, well, surprising—particularly when the self-focused emotion of pride did not.

Why was this happening? The researchers found a clue in a final pair of studies: Participants were also more egocentric after induced to feel uncertain, and surprise and anxiety are both associated with uncertainty. While anger makes us certain in our righteous indignation, anxiety and surprise make us unsure of what’s going on and what will happen next. And when we feel uncertain, we tend to fall back on what we know to be true—namely, our own perspectives and feelings.

Although Anna’s lasagna might not seem particularly relevant in the grand scheme of things, these findings point to a disturbing possibility. If our stress-filled lives generate more moments of anxiety, that means our perspective taking is routinely compromised—and with it, part of our ability to empathize and connect with others.

Now more than ever, we need to train our empathy muscles. Consider trying these science-based practices, particularly if you’re prone to anxiety:

That day in Dublin, I caught my flight. I also learned a lesson in empathy. No one wants to live life as if they’re constantly late for a plane, too stressed to look around and connect with others. We’re much better off cultivating empathy, building connection, and accepting that what will be, will be—missed flights and all.

This article generated controversy among our readers on social media. Read about it and gain more context for this study in “What is the Relationship Between Stress and Empathy?”