When was the last time you thought about the fact that you are a member of the human species?

For most of us, this aspect of our identity is not front and center. More relevant are things like gender, ethnicity, nationality, religion, political party, sports team affiliations, and all of our other group memberships, large and small. Not only do we stake our identity and often also our sense of self-worth in these groups, but we tend to be more helpful towards those who belong to them, often at the expense of those who do not. 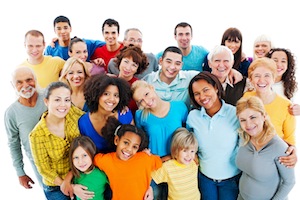 A significant minority of people, however, seem less concerned with group distinctions. As Stephen Asma recently argued in the New York Times Opinionater blog, these small group loyalties are both natural and inevitable, given our limited emotional and physical resources.

But while it may be true that we cannot be everywhere at once or love everyone equally, many forms of human connection are more like muscles to be strengthened than pools to be drained.

For a significant minority of people, this sense of limitless kinship is particularly strong. For example, while many turned a blind eye, some individuals risked their lives to rescue Jews during the Holocaust. In interviews conducted by Kristen Renwick Monroe for her book, The Heart of Altruism, many of these individuals described a sense of common humanity, or “belonging to one human family.” Those who did not offer help were less likely to possess this feeling of expanded kinship.

In a recent article published in the Journal of Personality and Social Psychology, psychologists Sam McFarland, Matthew Webb, and Derek Brown developed a new scale for measuring individual differences in this attribute, the Identification With All Humanity scale (IWAH).

The scale involves a series of questions assessing the degree to which someone identifies with “all humans everywhere” (“identifying” includes things like feeling love toward, feeling similar to, and believing in), independent of how much they identify with people in their own community and country. They then examined how scores on this measure relate to various personality traits and behaviors. Here are four highlights from the findings.

1. It’s more than just being a good person.

Sometimes the two are even inversely correlated, as evidenced by research suggesting that, paradoxically, those living in collectivist cultures, though willing to sacrifice for their group members, may be even less likely to help outgroup members, compared to members of individualistic cultures. In other words, you might feel nothing but good will towards people who are similar to you, but how do you feel about people whose values or lifestyles are different from your own?

The IWAH is unique in that it identifies where people draw the line, and therefore it can make meaningful predictions about their behavior in a wider range of situations. The researchers found, for example, that people who score high in IWAH are also more concerned about global issues such as combating world hunger and addressing human rights violations, even when controlling for dispositional empathy and moral concern.

2. Caring about humanity might make you a nervous wreck.

Not surprisingly, people high in IWAH tend to be higher in the personality traits of openness to experience and agreeableness. But it turns out that they are also higher in neuroticism, a trait characterized by anxiety and negativity.

The researchers find this perplexing: “We cannot hazard a guess,” they write, “as why those who agree with items such as ‘I would feel afraid if I had to travel in bad weather conditions’ and ‘I sometimes can’t help worrying about little things’ identify more strongly than others with all humanity.”

I’m not sure about the bad weather connection, but to me it’s not actually that surprising that those who worry about little things also worry about big things, like the state of humanity. If you truly care about the welfare of people across the world, many of whom are ravaged by war, natural disasters, and disease, how can that not cause you anguish? (And, looking at it the other way around, if you’re a generally anxious person, it’s maybe not so surprising that human suffering and injustice would enter into your repertoire of worries.)

3. “Every other person is basically you.”

As one of the Holocaust rescuers quoted in the article puts it, every life is worth just as much as one’s own. While most people value the lives of ingroup over outgroup members, those high in IWAH were found to value ingroup and outgroup lives more equally (in this case, American vs. Afghani lives).

Value placed on lives was measured by having participants choose between policies that pit lives in one country against economic loss or gain in the other (e.g., a loss of Afghani lives versus an increase in grocery prices in the U.S; a loss of American lives versus a loss of shelter for Afghani civilians) and comparing those policy preferences.

But what if these individuals were forced to make a direct choice between American and Afghani lives, or between the lives of family members and strangers? One might imagine that even the most devout humanitarian would prioritize the lives of those closest to them. We may strive to transcend group boundaries, but when it comes down to it, we are social beings who thrive on loyalty and belonging. It’s hard to imagine a world without any distinctions at all.

4. Is humanitarianism a luxury?

The main purpose of this research was to develop a scale to capture IWAH, but the researchers also speculate, in their conclusion, about why some people become high in IWAH and others do not.

One possible explanation is that a loving, secure childhood environment allows people to feel less threatened by those who are different from themselves (and indeed, attachment security primes have been shown to reduce intergroup bias).

This reasoning led the researchers to question whether IWAH might be somewhat of a luxury, something that a person can only focus on when their own basic physical and psychological needs are met. In other words, maybe it’s only the privileged who have the time and resources to concern themselves with global human welfare.

But it seems that identification with humanity is possible even in the most dire of circumstances, as it was for the Holocaust rescuers whose own safety was clearly at risk, or for victims of natural disasters who have lost everything and yet still help strangers get back on their feet.

The Greater Good Science Center has developed a quiz, based on the IWAH scale, to measure how much you love humanity. When you’re done, you’ll get your score, along with ideas for increasing your feelings of connection to humankind.

Our ability to identify with other humans failed an important test this past week. During the confirmation hearing of John Brennan (the president’s nominee for CIA director) much attention was drawn to the constitutional problems presented by the administration’s killing of American citizens abroad. But precious little attention was focused on the killing of Pakistanis, Afghans, Yemenis, and Somalis - many of whom are innocent civilians having absolutely no connection to the terrorist threat we are told to fear.

A society that cared about all humanity, and recognized its common human identity, would worry just as much about its impact on others as its impact on members of its own “tribe.” The so-called War on Terror has been a devastating blow against the spirit of shared humanity, deliberately and cynically cultivating an us v. them mentality in the general public. Those of us who see beyond tribal loyalties - like the Code Pink protestors who were forcibly ejected from the Brennan hearing - face a Sisyphean task in overcoming the unnecessary hatreds and suspicions that have multiplied since 9/11.