This month, we feature videos of a Greater Good presentation by Robert M. Sapolsky, one the country’s foremost experts on stress. In this excerpt from his talk, the best-selling author and Stanford University professor explains the difference between bad stress and good stress, and how we can manage the effects of chronic stress on our lives.

In 1900, what do you think were the leading causes of death in this country? 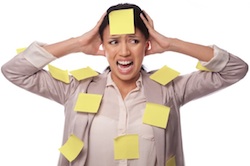 If you were 20 to 40 years old and a woman, the single riskiest thing you could do was try to give birth. TB, Pneumonia, influenza killed a lot of other people. But few people under the age of 100 die of the flu anymore. Relatively few women die in childbirth. Instead, we die of these utterly bizarre diseases that have never existed before on the planet in any sort of numbers—diseases like heart disease, cancer, adult-onset diabetes, and Alzheimer’s.

And this one: “Why is it that when we’re feeling unloved, we eat more starch?” Figure that out, and you’ve cured half the cases of diabetes in this country

Indeed, when you look at the diseases that do us in, they are predominantly diseases that can be caused, or made worse, by stress. As a result, most of us in this room will have the profound Westernized luxury of dropping dead someday of a stress-related disease. That’s why it’s so urgent that we understand stress—and how to better manage it.

Do you remember “homeostasis,” a term I guarantee you heard in ninth grade biology? Homeostasis is having an ideal body temperature, an ideal level of glucose in the bloodstream, an ideal everything. That’s being in homeostatic balance.

So to reestablish that balance, you secrete adrenaline and other hormones. You mobilize energy and you deliver it where it’s needed, you shut off the inessentials like the sex drive and digestion, you enhance immune defenses, and you think more clearly. You’re facing a short-term physical crisis, and the stress response is what you do with your body. For 99 percent of the species on this planet, stress is three minutes of screaming terror in the savannah, after which either it’s over with or you’re over with. That’s all you need to know about the subject if you’re a zebra or a lion.

If you’re a human, though, you’ve got to expand the definition of a stressor in a very critical way. If you’re running from a lion, your blood pressure is 180 over 120. But you’re not suffering from high blood pressure—you’re saving your life. Have this same thing happen when you’re stuck in traffic, and you’re not saving your life. Instead you are suffering from stress-induced hypertension.

We humans turn on the stress response with memories, with emotions, with thoughts, and the whole punch line is: That’s not what it evolved for. Do it regularly enough, and you’re going to damage your cardiovascular system. Increased blood flow hammers on the walls of your blood vessels, causing inflammation. Fat and glucose and cholesterol glom on and begin to clog your arteries. That’s bad news. You are more at risk for chronic fatigue, sleep disruption, muscle atrophy, and probably most importantly, adult-onset diabetes, this once obscure disease that’s just on the edge of being the number one killer in this country.

Chronic stress also does bad things to the nervous system. Stress kills neurons in the part of the brain called the hippocampus and weakens the cables between neurons, so they can’t talk to each other. This impairs the formation and retrieval of long-term memory. The opposite thing happens in the amygdala, which is where we see fear in a brain scanner. In the hippocampus, stress causes stuff to shrivel up. But stress feeds the amygdala. It actually gets bigger. Chronic stress creates a hyper-reactive, hysterical amygdala, and this tells us tons about what stress has to do with anxiety disorders.

Another domain: the mesolimbic dopamine system. Dopamine is a neurotransmitter that is about reward and pleasure. Cocaine works on the dopamine system. All the euphorians do. What are the effects of chronic stress on this part of the brain? Those pathways get depleted of dopamine, and this takes away your ability to feel pleasure. So if stress depletes your dopamine, what have you just set yourself up for? Major depression.

What about the frontal cortex? It’s the most human part of the brain; we’ve proportionally got more of it than any other species does. And what does the frontal cortex do? It does gratification postponement, self-discipline, long-term planning, emotional regulation. It’s the last part of the brain to fully mature—that doesn’t happen until you’re 25 years old, which explains a lot about the freshmen year of college.

This has a very interesting implication. If this is the last part of the brain to fully develop, by definition, then, it is the part of the brain least constrained by genes and most sculpted by experience. What does chronic stress do to the frontal cortex? Atrophy of neurons, disconnecting circuits. As a result, you make the most idiotic decisions, which are going to haunt you for the rest of your life, and yet you think they’re brilliant at the time. That’s another effect of chronic stress: Your judgment goes down the tubes.

How to manage stress

We’ve just gone on a quick tour of all the things that can go wrong from chronic stress. If you study the subject for a living, it’s amazing to you that anybody is still alive, that we haven’t just collapsed into puddles of stress-related disease.

Despite that, most of us do decent jobs at coping, and a subset of us is spectacular at coping. And thus from day one, stress researchers have wondered why some bodies and some psyches deal better with stress than others. In making sense of individual differences, what we’re essentially asking is, “What is it that makes psychological stress stressful”? And a huge elegant literature by now has shown precisely what the building blocks are.

The literature is built on experiments like this one: You have a lab rat in a cage, and every now and then, you give it a shock. Nothing major, but nonetheless, the rat’s blood pressure goes up and so do stress hormone levels. Up goes the risk of an ulcer. You are giving this rat a stress-related disease.

Now, in the second cage, there’s another rat. Every time the first rat gets a shock, so does the second. Same intensity, same duration, both of their bodies are being thrown out of homeostatic balance to exactly the same extent.

But there’s a critical difference: Every time the second rat gets a shock, it can go over to the other side of its cage, where there’s another rat that it can bite the crap out of. And you know what? This guy’s not going to get an ulcer, because he has an outlet for his frustrations. He has a hobby.

There are other stress experiments that involve torturing rats, which suggest ways for humans to manage stress. We can give the rat a warning 10 seconds before each shock, and we find it doesn’t get an ulcer. That tells us that you are less vulnerable to a stress-related disease if you get predictive information.

Another experiment: If we give the rat a lever to press, and that rat thinks he’s in control of the shocks, that helps—a sense of control decreases the stress response.

Yet another experiment tells us it helps to have friends: If a rat getting shocks has a friend it likes in the cage, and they are able to groom each other, the rat doesn’t get the ulcer. So social affiliation helps control stress.

Okay, these are very powerful observations. They’re helpful. But please don’t assume that if you get as much control in your life and as much predictive information in your life as possible, you will be protected from stress. To understand why, let me share some of the subtleties of this field.

Look at the rat that got a warning. Timing is everything. He didn’t get an ulcer when he got a 10-second warning. But if the warning light goes on one second before the shock occurs, it has no positive effect whatsoever, because there isn’t time for the rat to adjust anything. Or suppose, instead, the warning light comes two minutes before. That will make the ulcers worse, because the rat is sitting there, ulcerating away, thinking, “Here it comes, here it comes, here it comes.” When it comes to predictive information, there’s only a narrow window where it works.

When does a sense of control work? When you’re dealing with a mild to moderate stressor, because in those circumstances you know how much worse it could have been and can imagine, rightly or wrongly, that you had control over that improvement. But if it’s a major disastrous stressor, the last thing you want is an inflated sense of control, because that sets you up to think that the disaster is all your fault. In the case of a major disaster, we tend to minimize people’s sense of control—by saying, for example, “It wouldn’t have mattered if you had gotten him to the doctor a month ago, it wouldn’t have made a difference.” And one of the worst things we do, societally, is attribute more control to victims: “Well, what’s she going to expect if she dresses that way?” or “Well, what are they going to expect if they choose not to assimilate?”

In short, a sense of control is protective for mild to moderate stressors, but it’s a disaster for major ones. In that domain, the most humane thing you can do is foster denial and rationalization rather than a sense of responsibility.

When is stress good?

When is it optimal? When it’s only moderately stressful, at the most. And good stress is transient—it’s not for nothing that you don’t have roller coaster rides going for three weeks! The stress also has to be happening in a context that feels safe overall. Moderately stressful at most, transient, safe—what does that define? 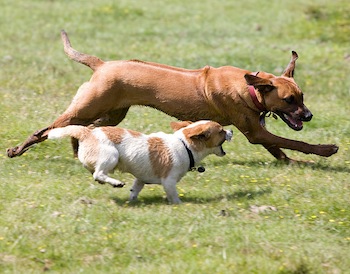 It’s when a higher rank dog says to a lower ranking dog: “I am willing to suspend our dominance relations right now and allow all sorts of unpredictable interactions. To show how much I’m doing that, I’m going to give you access to my throat or my genitals, and we’re just having a great time here playing.” In play, you feel safe, and as a result, you are willing to give up some control and predictability. We say, “Surprise me!” That’s good stress.

There’s another lesson we can learn from dogs and other hierarchical mammals, like baboons: Social rank can cause stress, especially where rankings are unstable and people are jockeying for position. But social rank is not as important as social context. What patterns of social affiliation do you have? How often do you groom, how often does somebody groom you? How often do you sit in contact and play with kids?

What’s clear by now is if you have a choice between being a high-ranking baboon or a socially affiliated one, the latter is definitely the one that is going to lead to a healthier, longer life. That’s the baboon we want to be—not the one with power, but the one with friends, neighbors, and family.

And the evidence for dominance as a function of
canine relationships is…....?

Far as I can see dominance can be a property of a
social interaction between domestic dogs. No
evidence of dominance hierarchies or persistent
social dominance within domestic dogs far as I’m
aware but would stand to be corrected.

Sorry, devil in the detail