Whether chatting with friends at a dinner party or managing a high-stakes meeting at work, communicating with others in a group requires a complex set of mental tasks. Our brains must track who is speaking and what is being said, as well as what our relationship to that person may be—because, after all, we probably give the opinion of our best friend more weight than that of a complete stranger. 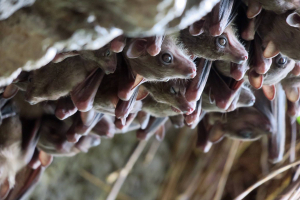 A new study published in the journal Science provides the first glimpse into how the brains of social mammals process these types of complex group interactions.

In the study, neuroscientists at the University of California, Berkeley, used wireless neural recording devices to track the brain activity of Egyptian fruit bats as they freely interacted in groups and occasionally vocalized to each other through high-pitched screeches and grunts.

“Most studies of communication, particularly vocalization, are typically performed with single animals or with pairs of animals, but basically none have been conducted in actual group settings,” said study co-first author Maimon Rose, a graduate student in the NeuroBat Lab at UC Berkeley. “However, many social mammals, including humans, typically interact in groups. Egyptian fruit bats, specifically, like to interact within large colonies.”

By tracking which of the bats vocalized, while simultaneously measuring the real-time neural activity in both the vocalizing and the listening bats, the researchers were able to decode how neurons in the bats’ frontal cortices distinguished among vocalizations made by themselves and by others, as well as how the bats distinguished among different individuals in the group.

When they compared the neural recordings among the different bats, they also found that brain activity became highly correlated when a bat made a vocalization. Surprisingly, they found that communication produced by bats that were “friendlier”—those that spent more time in close proximity to others—induced a higher degree of correlations across the brains of the group members.

“Other neuroscience studies have tried to examine small pieces of these interactions individually. For example, one study might examine how neurons respond when somebody else speaks, and then a separate study might look at how neurons respond when that individual speaks,” said study senior author Michael Yartsev, an assistant professor of neurobiology and bioengineering at UC Berkeley. “This study is the first to really put all of these pieces together to get a full picture of communication within a social group.”

Like humans, Egyptian fruit bats are highly social creatures. After long nights spent flying 10 miles or more in search of ripe fruit, these nocturnal animals pass the daylight hours packed into tight caves and crevices alongside hundreds or thousands of other bats. Not surprisingly, studies suggest that these bats typically vocalize to squabble over food, sleeping space, and mating attempts.

“These bats are very long-lived—they live about 25 years—and basically their entire lives are spent in this group social living,” Yartsev said. “So, the ability to live together in a group and communicate with each other is an inherent feature of their lives.”

Even in laboratory settings, bats seem to prefer the comfort of a crowd, typically spending most of their time physically pressed against each other in a tight cluster. Notably, aside from making clicking noises for echolocation, Egyptian fruit bats do not engage in any long-distance form of communication and appear to vocalize to other bats only when clustered together.

“If you visit these bat caves, you can just look up and see tens of thousands of animals,” Yartsev said. “So, it really wouldn’t make sense for a bat to shout across the cave to another bat.”

Bats’ habit of only vocalizing within tight social clumps makes them ideal subjects for studying group communication because, if a bat does call out while in a cluster, that call is most likely an indicator that social communication is taking place. However, this behavior also posed one of many technical challenges for the research team, said study co-first author Boaz Styr, a postdoctoral researcher in the NeuroBat Lab.

“One big problem was trying to identify which bat made a vocalization, because they spend their time in tight clusters and sometimes obscure each other,” Styr said. “Even though we had high-resolution cameras recording at different angles, and lots of microphones around, it could be hard to pinpoint which bat was making a call at exactly which point.”

During the experiments, four to eight bats were allowed to freely interact in a darkened enclosure in the lab, and allowed to spontaneously vocalize. To accurately identify which bat made each vocalization, the team developed wireless vibration sensors that the bats could wear around their necks, almost like necklaces, and which could detect the vibrations created when a bat made a call.

“These vibration sensors, paired with our ability to wirelessly record neural data from multiple bats at the same time, allowed us to create this experiment in which the bats could freely behave and spontaneously communicate,” Styr said. “Getting all of these technical things to work together was extremely challenging, but it allowed us to ask these very important questions.”

Neurons for self and others

In one set of experiments, the researchers allowed groups of four or five bats to freely interact within a darkened enclosure in the lab, while carefully monitoring each bat’s vocalizations and brain activity.

They found that, within each bat’s frontal cortex—an area known to be involved in mediating social behaviors in animals and humans—separate sets of neurons were activated, depending on which bat in the group vocalized; in other words, a vocalization from one bat would stimulate activity in one set of neurons, while a vocalization from a different bat would stimulate a different set of neurons. These correlations were so strong that, after identifying which sets of neurons corresponded to which bat, the researchers could identify which bat had vocalized purely by looking at the neural activity of the other bats.

“What these individual neurons cared about was, ‘Am I making the call? Or is somebody else making the call?,’ no matter what type of vocalization it was,” Styr said. “Other neurons were only sensitive to when one specific bat within the group was talking.”

Earlier work from the NeuroBat Lab has demonstrated that the brains of bat pairs tend to sync up when they socialize. In this study, the authors discovered that during vocal communication, the whole group syncs up together. This effect was not observed when the bats simply heard playback of the same sounds, suggesting that this phenomenon was specific to active communication taking place among the group members.

Intriguingly, the degree of correlation among the group members’ brains appeared to depend on which bat was talking, with some bats having stronger synchronization with specific individuals. Remarkably, these inter-brain patterns lasted for weeks, presumably representing stable social relationships among the individuals.

To better understand how social dynamics impact brain activity, the researchers conducted a separate set of experiments in which eight bats were allowed to freely interact in a larger enclosure. In addition to monitoring the vocalizations and neural activity of each bat, they also tracked each bat’s spatial position relative to the other bats in the group.

“Bats can recognize and have stable social relationships with other individual bats, even over long periods of time and in different circumstances,” Rose said. “And because we had this group of bats, we decided to track their positions in a larger area to see if that would tell us anything about their social relationships—who likes whom, and who are more sociable bats and the less sociable bats.”

“We found that when the in-cluster bats vocalized, they elicited a much more accurate neural representation of their identity in the other bats and also elicited a much higher level of brain synchrony within the group,” Rose said. “So, while it’s not entirely clear what exactly is going on, it seems that the behavior of the out-of-cluster bats really shifts their neural representation in the brains of the other bats.”

Understanding the neural underpinnings of why some individuals can navigate almost any social situation with ease, while others are consistently ostracized or misunderstood, could have major implications for improving human mental health, Yartsev said. He hopes the study inspires neuroscientists to take a more comprehensive look at group communication within other social mammals.

“Often, in neuroscience, we like to take a simplified approach and focus on one component of a complex process at a time,” Yartsev said. “But in reality, the social world is complex. When we spend time with our friends, there’s a lot of relationship history and baggage that comes with each interaction: what happened yesterday, who that person is friends with, how each person feels in the moment. And so, breaking things down and looking at them individually can give an illusion of control but, in fact, make it very difficult to get the complete picture.”

“Our brains, and those of animals, have evolved for and constantly struggle with the complexity of real life,” Yartsev added. “I personally believe that to truly understand the brain, we need to embrace this complexity, rather than fear it, and, indeed, every time we did so, we found out something new and exciting. I hope that this, as well as our other studies, demonstrate that we need to study the brain in all its complexity.”