Why is loneliness so painful? Why do we care how others treat us? And, why do we spend so much time perseverating on past and future relationships?

These are some of the questions addressed in Matthew Lieberman’s new book, Social: Why Our Brains Are Wired to Connect. Lieberman, a social neuroscientist at the University of California, Los Angeles, outlines the fascinating neurological evidence for the primacy of social connections in our lives, and presents guidelines for how we can use this information to improve our workplaces, schools, and personal well-being. 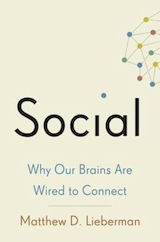 According to Lieberman, there are three neural networks within the brain that promote our social connection: one that involves our ability feel social pain and pleasure; one that allows us to read others’ emotions and predict their behavior; and one that helps us to absorb cultural beliefs and values, thereby linking us to our social groups. Each network involves brain structures and neural pathways that have been mapped using fMRI technology and studied via psychological experiments, some of which make for fascinating and provocative reading.

For example, because social pain is experienced through the same neural pathways used to process physical pain, researchers have found that Tylenol is an effective way to reduce the anguish of social loss or separation. Additionally, pain centers in the brain light up when people are exposed to unfair treatment—even by strangers in an experimental economics game. Alternatively, reward centers light up when people are treated fairly by others in these games—even if that fair treatment results in smaller monetary rewards—underlying the special importance of fairness in social interactions.

In one study, Lieberman and his colleagues had subjects lie in an fMRI scanner and asked them to watch pilot ideas for a new TV show. Later, the subjects were asked to describe the pilots to a TV producer—a role played by other subjects in the experiment—who would decide which ideas merited further consideration. When subjects in the scanner found a pilot that later interested a producer, the mind-reading network in their brains lit up “like a Christmas tree.” Activity in other parts of their brains, like those involved in short term memory or reasoning, did not successfully predict producer approval.

“This suggests that even when we are first taking in new information, part of what we do is consider whom we can share information with and how we can share it in a compelling way,” writes Lieberman. Apparently our need to connect influences how we remember and how we learn.

Lieberman has found that this same mind-reading network in the brain is “on” much of our waking life and is our brain’s default mode when we aren’t engaged in other activities. This system “allows us to figure out the psychological characteristics of the people we see every day so we can better predict their reactions to novel situations and avoid unnecessary feather ruffling.” He suggests that “mentalizing” (as researchers call this ability) helps us to cooperate and work together, as well as “to strategically compete with those around us.”

In another experiment, Lieberman had a group of smokers lie in an fMRI, view anti-smoking ads, and rank which ads most influenced their desire to stop smoking. Later, when the ads’ effectiveness was measured by call volume to a quit-smoking hotline, the most effective ad was the one that lit up the subjects’ septal area of the brain—an area associated with self-concept—and not the one subjects had ranked highest. Lieberman concluded that social influences, like cultural values and ideas, often enter our brain and shape our self-concept below cognitive awareness.

All of this research leads Lieberman to one conclusion: “To the extent that we can characterize evolution as designing our modern brains, this is what our brains were wired for: reaching out to and interacting with others,” writes Lieberman. “These social adaptations are central to making us the most successful species on earth.”

Lieberman thinks we should accept this about ourselves and use the information to change our social institutions for the better. For example, he points to studies that show how social capital in an organization is tied to its economic success. If this is true, it makes sense for business leaders to develop social skills to better understand the needs and motivations of their workers in order to gain a more productive workforce.

Schools need to encourage better social climates where students feel like they belong, writes Lieberman, since a sense of belonging is closely tied to a higher GPA. Teacher should also plan lessons that engage students’ mind-reading neural networks in order to help them learn material better, especially in the social sciences and humanities, but even in math and science courses. Assigning students to learn material in order to help another—i.e., perhaps to tutor a younger student in math—would improve academic learning too, he argues.

But perhaps most importantly, we need to understand how vital our social connections are to our happiness and health. Lieberman points to research that shows having social connection is as important to health outcomes as not smoking. Our experience of pain is lessened by the presence of those we love and our sense of worth is connected to our social standing more than to our monetary wealth. He cautions against working so hard or remaining so isolated that we eschew social ties.

Instead, we must take time to build and nurture social relationships—at home, work, and school. Not only will we be using our brains for what they were designed to do; we will be happier for it, too.